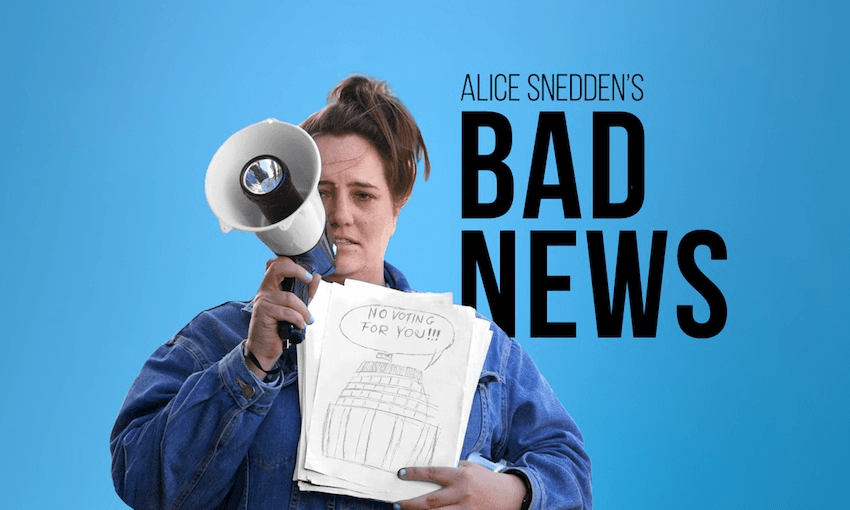 Alice Snedden’s Bad News saw the comedian wrestling with some of the most confounding and contentious political and social issues confronting Aotearoa. Watch the full season, first released in 2020, here.

Sex work is decriminalised in NZ, unless you’re a migrant worker. In this episode Alice visits a brothel for business and pleasure and asks why this discriminatory law hasn’t been changed. Featuring Madam Mary, Dame Catherine Healey, Hannah (not their rela name) and Iain Lees-Galloway.

What is a Trans Exclusionary Radical Feminist and why are they so mad about periods? In this episode Alice heads to Wellington to find out. Featuring Georgina Beyer and Caitlin Spice.

Why do Māori live on average seven years less than Pākehā? Alice delves into the health system and asks if more money should be spent on Māori health and less on her digestive system. Featuring Kirimoana Willoughby, Sariah Witika, Dr Heather Came, Janell Dymus-Kurei and Pat Snedden.

Should God pay tax? Alice asks this and many more hard-hitting questions as she attempts to finally separate church and state once and for all. Featuring Eli Mathewson, Chris Bethwaite, Andrea Black and a lot of Weet-Bix.

Why are we so scared of breasts? In this episode, Alice attempts to change the minds of viewers using exposure therapy and living out her soap opera fantasies. Featuring Steve Crow, Fiona McNamara, Erica Brooks, Maxine Fleming and Jess Joy Wood.

Should we have the right to choose the circumstances of our death, or is it just too complicated to sort out? In this episode, Alice confronts her fear of death and admits she may not be immortal after all. Featuring Brynley Stent, Claire Freeman, Josephine Ayers, Te Hurinui Karaka Clarke, Bobbie Carroll and David Seymour.

In the final episode of the season, Alice is joined by co-host Kura Forrester to examine just how racist New Zealand is and why Pākehā just can’t seem to get it together and honour the Treaty. Featuring Hone Harawira, Dame Susan Devoy, Pat Snedden, Janell Dymus-Kurei, Dr Heather Came and Julia Whaipooti.

Alice Snedden’s Bad News was commissioned by RNZ and made possible by the RNZ/NZ On Air Innovation Fund.