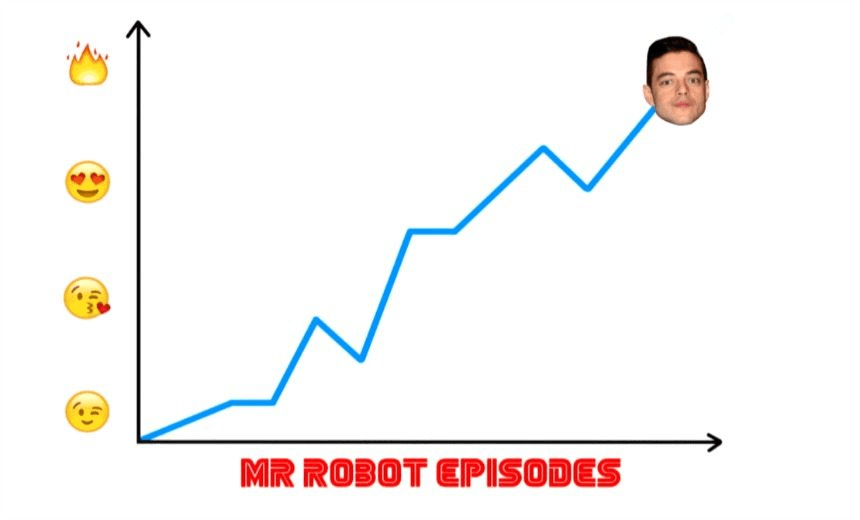 When was the exact moment that Elliot in Mr Robot got hot? A Spinoff science experiment

Brave scientist and television enthusiast Lucy Zee attempts to solve one of the last remaining mysteries of modern times: at what moment does Elliot in Mr Robot become irresistibly attractive?

There’s no doubt that Mr Robot is one of the most engrossing, trippiest shows of 2016. But apart from the intriguing storyline, the Emmy-winning acting and the buzzy Easter Eggs, what else is keeping us watching?

Answer: It’s the hotness of Elliot.

Much like Steve Buscemi starring in every movie ever, we’ve all grown to love Elliot and are slowly drowning in the warm depth of his big wet eyes.

How and when this obsession with Elliot began is hard to pinpoint, but there are moments when he appears on screen where one’s throat goes a little drier and one’s groin gets a little warmer. It’s hard not to fall in love with the sleepy dulcet tones of his voice, the lingering lost puppy looks and, of course, the self-assured confidence of his computer hacking skills.

I decided to take a look at some moments from Mr Robot when Elliot was at his most attractive and measure them them according to my very scientifically crafted ‘hotness level’.

This is when we first meet Elliot, a simpler time when were more interested in what the hell is going on in this show than realising that this guy is going to haunt our dreams for the rest of our lives.

Just as you were starting to think Elliot was a closed off nerd with no pull power, BAM. He’s in bed with a hot girl and admit it, you’re a little shook. Nerds are people too. And just like people, nerds can also be sexy.

We usually only see Elliot in his trademark black hoodie, in the nude or in work clothes, so this is a cute change. But in true Elliot style, he’s still wearing his hoodie over what might be a couple thousand dollar tuxedo.

Hotness level: 3 out of 5 Elliots

It’s very rare we get to see a calm, nearly normal Elliot in broad daylight. This is the version of Elliott the viewer wishes for him. We just want him to be happy, social and getting a little vitamin D.

This is the first time we get to see Elliot in season two. Like seeing an ex-boyfriend again, your heart flutters a bit and you didn’t realise how much you missed seeing his face…

But something’s a bit off. You’re wondering if he missed you, has he got a new girlfriend, where has he been this whole time? Not a single text? What you can’t even Facebook message me? My friends saw you on Tinder. Did you swipe right on any of them?

In the weirdest episode ever, for 17 minutes we watch Mr Robot as an ’80s sitcom with a disturbing laugh track. As much as we love Elliot, there are just some things you shouldn’t mess with – like a chunky stripe and a pair of long jean shorts.

Nineteen episodes of twists, turns and mindfucks and we’re finally awarded with a FULLY NUDE Elliot. If this gets your heart rate up, you should also watch the Need For Speed movie, it’s really bad but Rami Malek does an incredible nude scene.

There’s something electric and sexually charged about these two characters interacting. Joanna already is dangerously fascinating and this is one of the few scenes where Elliot doesn’t flinch when he’s touched. But maybe we’re wrong, maybe there’s nothing there and maybe multiple ‘Elliot Alderson X Joanna Wellick’ fanfiction stories on the internet are all wrong too.

Over two seasons and 22 episodes, Elliot has managed to get hotter and hotter, hacking into our hearts and overriding our internal servers. We might not know much about computers, but Elliot can keep sitting on the F5 key, because his ass is refreshing.

Feast your eyes on Mr Robot, with the season two finale arriving exclusively to Lightbox tonight