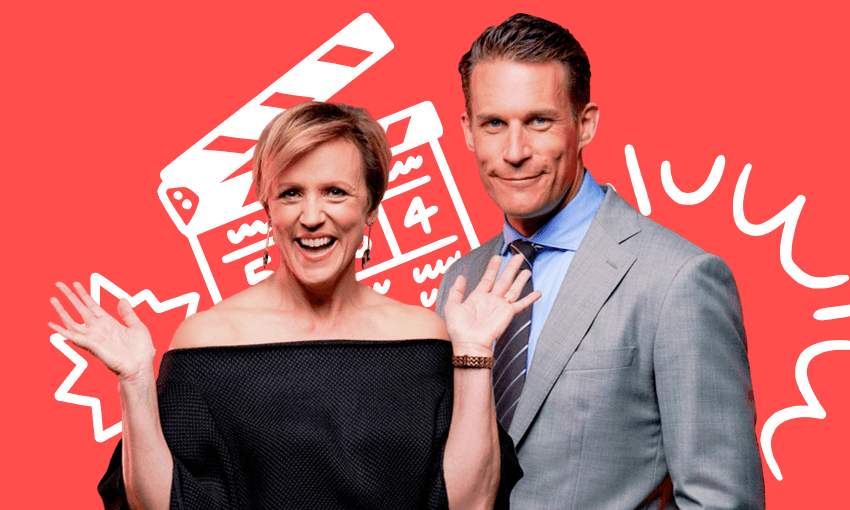 As they raise their bats in celebration of a broadcasting milestone, Hilary Barry and Jeremy Wells tell Tara Ward it’s a privilege to be on the telly every night.

Hilary Barry and Jeremy Wells first sat down on the Seven Sharp couch together on February 5, 2018. At the time it felt like it could go either way – Newsboy? At 7pm? – but 1000 episodes later the pair is still going strong, keeping viewers informed about everything from mask trends to kiwifruit picking to She Sheds. They’ve become so iconic that one Wellington company has even immortalised the two presenters into tiny flatpack figurines, so anyone can keep Hilary and Jeremy in their own home, forever and ever.

Neither host is entirely sure why they’ve been turned into little wooden people, or how they’ve lasted 1,000 episodes. Barry hopes it’s because viewers find them relatable – “the kind of people they’d like to have a beer at the pub with” – but Wells has another theory. “Maybe it’s because we’re just on the whole bloody time,” he laughs. “We’re like a couple of old cockroaches. Every day, there they are, they pop up on the bloody news for God’s sake and then they’ve got their own show. They just keep coming back.”

It doesn’t feel like they’ve been working together for 1,000 episodes. “It feels more like 650, or something like that,” Wells jokes. The two have a firm friendship that makes working together a pleasure, and the ever-changing nature of news means Seven Sharp has continued to evolve, with different reporters, sets and stories keeping the show feeling fresh and unique.

But things changed for Seven Sharp during the pandemic, as we turned to the television in record numbers. Seven Sharp became the cheery chaser that followed the heavy news bulletin, and regardless of how chaotic the Covid-19 world became, viewers relied on Seven Sharp to pop up every night at seven o’clock to capture the feelings of the nation and provide some much needed light relief with their lockdown haircut disasters and handy tips on how to impersonate an orca.

Wells realised how important a friendly face on the telly can be when he self-isolated just before the first lockdown in March 2020. He’d never watched Seven Sharp as a regular home viewer before, and he reckons the experience helped him understand why so many people around New Zealand regularly watch the show. “Hilary is the kind of person that makes people around her feel good,” he says. “I felt that when I watched the show. I immediately felt relieved and I felt calm and I felt reassured by her presence.”

For Barry, the most rewarding part of being a broadcaster is being with people in uncertain times, and while Seven Sharp has supported viewers during the pandemic, she says the audience supported the show in return. People send in handwritten notes and crafts, like the crocheted blankets that end up at Jeremy’s house, or intricate hand painted portrait rocks. “The time and care and love that people put into these things, and send them to us, honestly, it’s so gorgeous,” Barry says.

Seven Sharp has told thousands of stories over the past four years, including Barry’s favourite tale about the bride who asked her two grandmothers to be her bridesmaids and Wells’ favourite about a West Coast icon who lives completely off grid. The most enduring story, however, is what’s going on in the background of Seven Sharp’s temporary set, like the high-tech A3 paper print outs that get stuck to the computer monitors every night as fake screensavers (and sometimes fall off mid-broadcast) or the lonely leopard-print wine bag that sits suspiciously close to Hilary Barry’s desk.

“I didn’t mean it to be in the background shot, but saw it once and thought ‘Oh dear, I probably shouldn’t have left that there, hiding the bottle of wine that I may have been about to open before we left the building’.”

Of course, Seven Sharp hasn’t been without controversy, and most of it comes from Hilary Barry’s wardrobe. “Every time I see Hilary emerge from the dressing room in something that’s off-the-shoulder, my heart flutters,” Wells says, referring to the flood of viewer outrage Seven Sharp receives whenever Barry dons a so-called “revealing” outfit. “Who would have thought, four years and 1000 episodes ago, that wearing a dress or a blouse or some off-the-shoulder top was going to cause so much controversy and bring so much joy to so many people?”

But after 1000 episodes and nearly as many off-the-shoulder tops, Hilary and Jeremy are glad the “happy kind of accident” of being paired up in 2018 worked out the way it has. “I had a pretty good hunch that Jeremy would be good to work with, but that hunch has absolutely been proven,” Barry says. Wells reckons he couldn’t ask for a better co-host: “I feel incredibly lucky that this insane piece of luck occurred where Hilary and I were given the opportunity to do the show, and that we’re lucky enough to still be welcomed into people’s living rooms every night,” he says. “It’s a great privilege.”

Seven Sharp screens every weeknight at 7pm on TVNZ 1, and on TVNZ+.