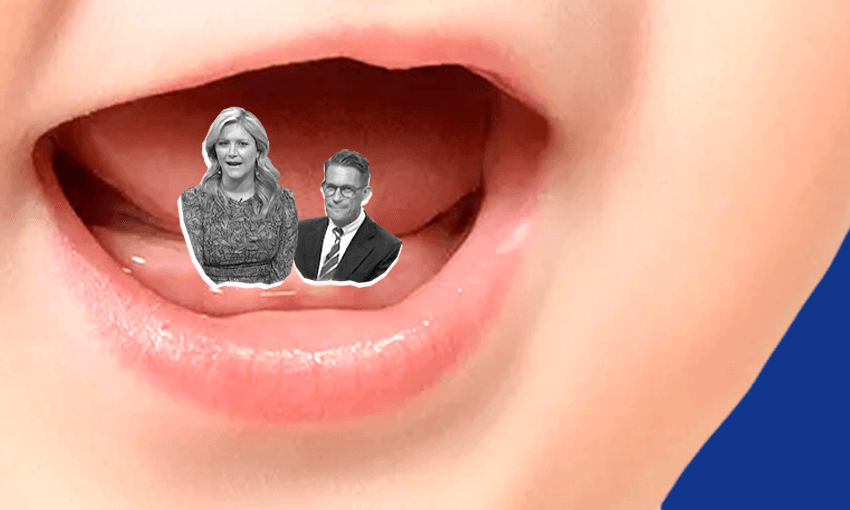 Toni and Jeremy, what have you done to the households of New Zealand?

Seven Sharp just told everyone the Tooth Fairy’s not real, and people are mad

Toni and Jeremy, what have you done to the households of New Zealand?

Last night Seven Sharp revealed to New Zealand children that the Tooth Fairy is not who they thought it was. Tara Ward relives this shocking moment.

Something wild happened on Seven Sharp last night, and I don’t mean Jeremy Wells saying “light bladder leakage” after the first ad break. Wells was joined by Toni Street on the Seven Sharp couch, and together they unleashed a story that would shatter dreams and break hearts across the nation.

Wells began by reminding us of the things in life we can count on, like pissing yourself, paying tax and dying. Tick, tick, still to do. You’ll probably lose your teeth when you’re dead, but don’t panic, the Tooth Fairy has your back. And your gums. The big question is, how much should the Tooth Fairy pay in a post-Covid world?

Forget the election, set fire to the economy and let us laugh openly in Covid’s face, because this is the type of heartwarming current affairs we need right now. Seven Sharp was on the case, but first, Street had a warning: stories about teeth can be scary. “If there are any young ones watching,” she said, “now’s probably a good time to send them out of the room. Maybe go and get a cup of tea.”

It was prudent advice. The children of Aotearoa donned their smoking jackets and retired to the parlour for a warm drink and cigar, safely cushioned from the damaging blow that was about to smash their childhood to smithereens.

Or, were they? According to the Seven Sharp Facebook comments section, it was already too late.

Seven Sharp’s shocking story was inspired by a recent survey of New Zealand tooth fairies, which revealed that 61% of us pay between $1 and $2 per fallen tooth. Viewers were treated to an imaginary tooth fairy delivery, the type of hazy reconstruction you used to see on Crimewatch in the 90s. A parent haggled with their toothless child, first placing a pathetic ten cents on their pillow, then shamed into adding a further 20 cents, before running out of patience and slamming down a credit card. I’m sure I heard someone yell “fuck’s sake” at the end.

Look, a kid can’t even buy a teabag for 30 cents these days, and who wants to handle spare change in this germy climate? Paywave is the way forward, and I applaud Seven Sharp’s approach. Give all the kids all the credit cards, and let the little feckers buy their own cups of tea from now on.

If you tuned in to Seven Sharp at this point, having missed Toni Street’s earlier advisory, you could easily be lulled into a false sense of security. Here was a joyful story about the magic of childhood, a story filled with cherubic faces, gappy grins and innocent children who loved the Tooth Fairy. Their cheeks were red and their hearts were pure. They said things like “the Tooth Fairy has tiny tippy-toe feet”,  “the Tooth Fairy has a white wand” and “the Tooth Fairy uses old teeth to make bracelets”.

Break out the Sensodyne, someone’s in pain. Seven Sharp just told all those kids who’d finished their cuppa and had come back to the lounge to polish off the dessert wines that they’ve been lied to their entire lives. Jacinda Ardern managed to sustain the mystique of the Easter Bunny through a national lockdown, but now? The Tooth Fairy doesn’t exist, your parents can’t be trusted, and while we’re at it, your face won’t stay like that if the wind changes.

Actually, not sure on that last one, but Seven Sharp burned the rest of those humble dreams to the ground.

Suddenly, light bladder leakage was the least of Seven Sharp’s problems. Outraged parents took to social media in the way that only outraged parents can. Others responded to the feedback with a “laughing face” emoji. That’s another tiny face with no teeth, and a final twist of the knife during an already difficult time.

The moral of the story? Trust no one. Say nothing. This would’ve never happened on Hilary Barry’s watch, but most importantly, don’t be one of the 2% of New Zealanders who cough up $20 for a tooth. “Who are these people?” Seven Sharp asked. Who are these people, indeed.