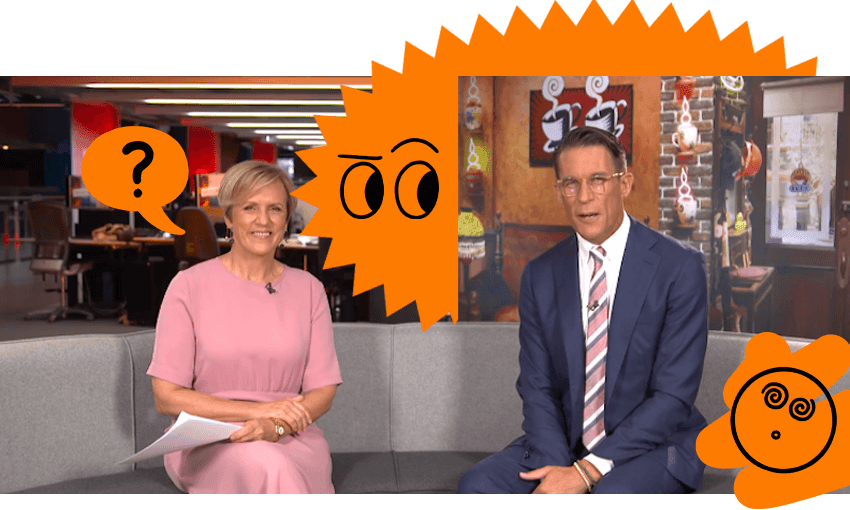 Justice for Seven Sharp, the only news show without a snazzy studio

Seven Sharp is rocking a curious backdrop of plastic containers and office sneakers, and Tara Ward is obsessed.

Five nights every week, Hilary Barry and Jeremy Wells sit on the Seven Sharp couch and deliver a steady stream of news stories. There are stories to inspire us, to educate us, to inform and entertain. Yet, every night, no matter how good Seven Sharp is and how important their stories are, I find myself distracted by the real story going on behind them.

Beyond Seven Sharp’s sofa lies an ever-changing exhibition, a mesmerising portrait of modern office life. Swivel chairs sit at awkward angles, objects lie strewn across desks. A bag here, a Sistema container there, a box of tissues behind Jeremy’s right ear. Personal items are chucked around willy-nilly, with joyous little care for a live TV broadcast or a lonely TV writer with nothing better to do than lie awake at night thinking about the detritus washing up on Seven Sharp’s shores.

What do these objects in this bleak still life tell us? Does that coffee cup know it’s being watched by hundreds of thousands of New Zealanders every night? What chaos is stuffed in those bags on the desk, and why is a single white sneaker lying on the floor?  Most importantly, is Seven Sharp filming from inside a cupboard?

Seven Sharp’s current set is a window into TVNZ’s soul, giving viewers a rare glimpse behind the current affairs curtain. This is where the magic happens, but lately I’ve been zoning out while Hilary and Jeremy talk, instead focusing on the drama in the background. Every night, those mysterious objects move slightly. You might call it a working newsroom, I call it the soap opera we didn’t know we needed.

Exhibit A, your honour: this white picture frame, which appeared out of nowhere in mid February and hasn’t been seen since. That’s a cliffhanger Shortland Street would be proud of. I zoomed in super close, and while pixels are a bitch, my instincts tell me it contains either a lovely photo of John Campbell or the crocheted budgie smugglers that Hilary gave Jeremy for Christmas, immortalised forever.

There is, of course, a worthy explanation. Seven Sharp are taking one for the team, as Covid-19 restrictions force the show to film from a temporary studio. A TVNZ spokesperson confirmed Seven Sharp was broadcasting from a different level within TVNZ, to allow social distancing within the newsroom. “It allows for less crossover between our different news and current affairs teams,” they said.

Hilary referred to the situation when Seven Sharp returned last month, calling it “camping”. “You probably thought, and we did too, at the end of last year when we were in our little makeshift studio in our little isolation bubble, that would be the end of it,” she said. “But no, no, omicron. That’s why we’re back up here.”

Seven Sharp are making the best of a bad situation, and for that, I raise my sneaker in their honour. TVNZ confirmed they’ve set up a replica Central Perk on some floor space with a rug, couch, table and background left over from the 25th anniversary of Friends. Everyone loves Friends. Hilary and Jeremy are friends, Seven Sharp is our friend. The link is clear.

Seven Sharp has kept calm and carried on, even though Breakfast has a new set that looks like they’re broadcasting from inside a cathedral, and Simon Dallow regularly goes to the moon and the supermarket with his fancy AR tricks on 1 News. Even Fair Go gets to stand in front of a snazzy screen to discuss the perils of fitted sheets. But Seven Sharp? No one told them life was gonna be this way.

Does Seven Sharp need a jazzy background to deliver our nightly dose of news and light entertainment? Of course not. Do they deserve one, though? Most definitely. The prime time jewel in TVNZ’s current affairs crown has earned far more than half a tribute wall for an American sitcom and someone’s handbag plonked in the background. Light a candle, send thoughts and prayers. Justice for Seven Sharp. Justice for that sneaker.

Seven Sharp screens Monday–Friday nights at 7pm on TVNZ 1 and on TVNZ OnDemand.