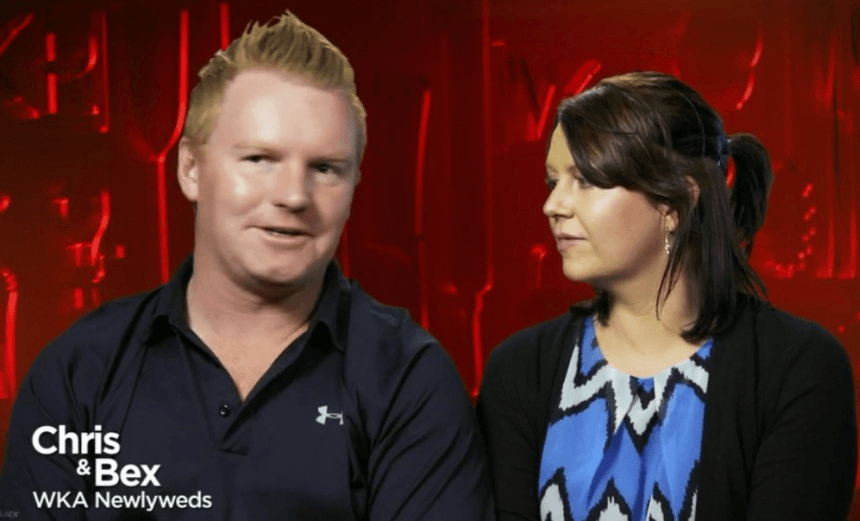 My Kitchen Rules NZ recap: Everybody hates Chris (and Bex)

This week on My Kitchen Rules NZ, Chris and Bex learn you can lead ten amateur foodies to Wanaka for tea, but you can’t make them like it.

From Charlotte and Maddie’s al fresco kitchen nightmare in Auckland, we head south, to Wanaka, for the penultimate instant restaurant of MKRNZ ’17. Hosts Chris and Bex have been by far the most lovely and cheerful contestants through the show’s first four weeks – almost suspiciously so. What exactly are they hiding?

“Oh, there’s Murray,” says Chris, waving at a passing ute as the pair drive around picking up their ingredients. “I love Wanaka,” he continues, “we know everybody.” On face value this might seem like idle driving chatter, but what if it is a symptom of something much darker? Maybe Chris actually hates Wanaka and is trapped in some kind of geographical Stockholm Syndrome. It’s a thought so terrible it doesn’t bear thinking about.

Chris and Bex have named their instant restaurant Aspiring Fare and decorated it with a location-appropriate ‘rustic vineyard’ theme. Grapevines adorn the table setting, wine barrels and bottles fill every empty space, and a lit candelabra burns perilously close to the curtain.

Aspiring, the pair explain to their assembled guests, relates to Wanaka’s proximity to Mount Aspiring National Park, and Fare is a nod to their use of local produce. “And maybe,” adds Chris, “you will score us ‘fair’ accordingly so.”

Chris and Bex are aspiring for kitchen greatness with the most ambitious menu of the series to date. Their entree, chicken liver parfait with caramelised onions and beer bread, is a clear attempt to win the heart (via stomach) of celebrity chef judge Manu Feildel. Chicken liver parfait is about as French as it comes, and as Chris explains, “Manu is a French man.”

The French man is soon waving his pottle of parfait at them. “Have you tried this?” he asks accusingly. They haven’t. “I’m highly disappointed…” he sighs – oh no, it’s the Teal and Sophie pho seasoning disaster all over again – “…because I haven’t had enough of it!”

After this masterful judging move, he goes on to call the dish “bloody delicious,” while Pete sounds close to tears during his praise-filled soliloquy. The dish’s biggest criticism surprisingly comes from Teal. “Food on a chopping board… I don’t get that,” he shrugs. “Please leave the board in the kitchen.”

After a successful entree, the judges are slobbering in anticipation of Chris and Bex’s main: lamb ragout and kumara gnocchi with a fig and aubergine salad. Ragouts are typically “nice and saucy,” says Pete – music to the ears of noted sauce-fiend Manu. “A sauce with meat in it,” he drools hopefully. The chefs have been slaving away all day on it, patiently reducing the sauce. Ultimately, that proves to be their undoing. Pete rages at the dry, over-reduced dish served to him; Manu hates the chewy gnocchi. “I could take or leave the salad,” says Pete. No one, not even culinary contrarian Jaryd, likes the main course. “It’s a big fail,” says Teal.

For dessert, the downhearted hosts have prepared something called Central Otago plum and almond tart with Cardrona Rose Rabbit ice cream. “I don’t really understand why the word ‘rabbit’ needed to be in it,” scoffs Sophie. Along with Teal, she seems to be making a late tilt at displacing Heather and Mitch as the show’s meanest duo. Manu does his bad cop routine again, with diminishing returns – he likes the dessert a lot, as does a praiseful Pete. The rest of the guests are not so easily impressed. “It looks like I’ve eaten a lot,” explains Heather, “but I was just trying to find something good about it.”

Tonight’s hosts have tried their best to create a fun, celebratory atmosphere at their instant restaurant, providing their guests with the wedding-standard Polaroid cameras and novelty props. This seems to work for all of about five minutes before the mood settles somewhere between ‘I want the world to burn’ and ‘I would literally rather be dead than at Chris and Bex’s house right now’. There is no apparent reason why everyone hates lovely, cheerful Chris and Bex so much, but it seems they all do.

The strangely negative vibe around the table is reflected in the team scoring. No two pairs can agree on a score – Jaryd and Ben give a 7, Tash and Hera a 6, Heather and Mitch a 5 and Teal and Sophie a 4. Charlotte and Maddie, desperate to stay in the competition, somehow manage to justify scoring Chris and Bex a 3. The combined total of 25 is equal lowest with that given to Jaryd and Ben. Even Jaryd concedes that is “not fair at all.”

The judges seem to have been served a different meal altogether. Both Pete and Manu give the “perfect” chicken liver parfait 10s, while the dessert earns a pair of 9s. Were it not for the dry ragout, which got just 3 from Pete and 4 from Manu, Chris and Bex could still have topped the leaderboard despite their stingy peers. As it ends up, they sit second, seven points off Teal and Sophie, with a total of 70/110.

Next week: The final instant restaurant, the one everybody has been waiting for: Heather and Mitch. The previews show Mitch cooking in a New York Yankees hat (of course he’s a Yankees fan) and a suggestion the pair could possibly finish last. Don’t believe it for a second.