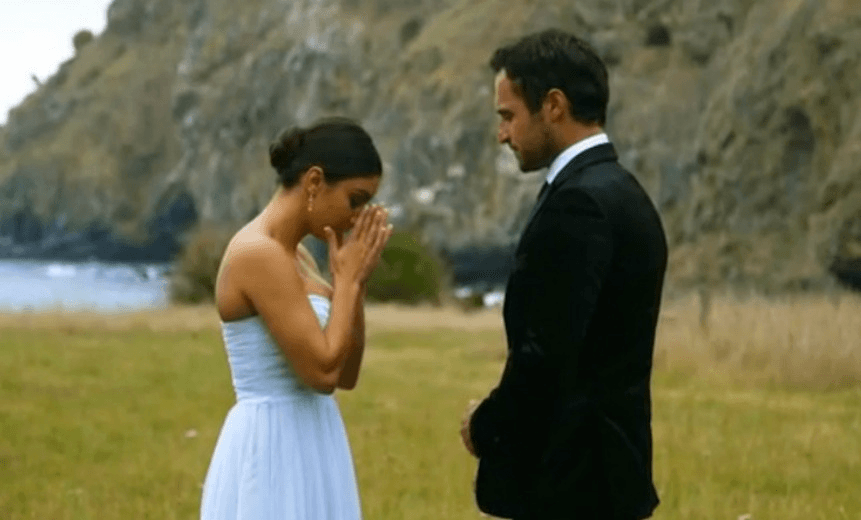 EXCLUSIVE: Jordan Mauger flipped a coin to decide the winner of The Bachelor NZ

In a tell-all appearance on The Real Pod this week, ex-Bachelor Jordan Mauger revealed how he chose the winner of season two, among other confessions including when he really wore the earpiece.

Jordan Mauger, star of The Bachelor NZ season two, has revealed to The Spinoff that he flipped a coin to decide who was going to receive the final rose in 2016. “When it came down to the final,” he told The Real Pod, The Spinoff’s weekly reality TV podcast, “I was so uncertain who was going to win.”

Mauger said he still hadn’t made the decision between Fleur Verhoeven and Nazanin Khanjani on the day of the final rose ceremony, and that he was “strongly encouraged” to choose somebody. “The first helicopter was waiting and they [the producers] said ‘who are they putting in it?’” he recalled, “so I flipped a coin.”

Mauger did not make any mention of his methodology on-screen, leaving viewers with the impression that he had followed his heart, rather than a small metal disc. Mediaworks responded with the following statement: “We are surprised to hear that Jordan tossed a coin to decide who was best for him, but ultimately the decision was his own and how he got there was his choice.”

The revelation comes following a chaotic aftermath to last year’s season, when coin-toss winner Fleur Verhoeven announced her and Mauger’s break-up two days after the finale aired on New Zealand television. “I knew it was very likely it wouldn’t work out with anybody,” Mauger said on The Real Pod, “but if you sign up to something, you see it through.”

Mauger made several other revelations about the 2016 season over the course of the podcast episode, which you can listen to in full here. It was a “dramatic rollercoaster”, he said, and what happened behind the scenes was “ten times more entertaining” than what made it on screen.

Mauger also admitted that he thought he came across as “a dick” on television.

During discussion around Claudia Hoskins, a participant in the 2017 series currently airing, Mauger hoped there was enough support for her. “The level of emotional stress, especially post the show for me, was not a nice time.” He said that no one from The Bachelor NZ had been in touch to check on his welfare after the series had finished, adding that he had received death threats following the finale.

On the earpiece speculation that featured on The Real Pod last week, Mauger said that while the producers were right to say that he had not been wearing one during the cocktail parties, he did use an earpiece during the rose ceremonies, the set-pieces at the end of each episode when the Bachelor reads out the names of the contestants who will remain in the competition. A network representative confirmed that earpieces are worn so that the director can notify The Bachelor when the cameras are ready for him to call the next name.

Mauger also addressed The Real Pod’s ongoing disgust at the soles of his shoes, revealing that they had a pre-worn layer of felt which may have contributed to their unsightly appearance. To the delight of the podcast hosts, the assistant director by day confirmed that he did indeed help to pack down The Bachelor NZ filming gear “on a couple of occasions.”

Finally, following the social media success of season one’s golden couple Art Green and Matilda Rice, The Real Pod asked Jordan if he had received any perks or free stuff following the show.

Listen to the latest episode of The Real Pod below or download the episode (right click and save). Subscribe to receive future episodes here on iTunes or via your favourite Podcast app: