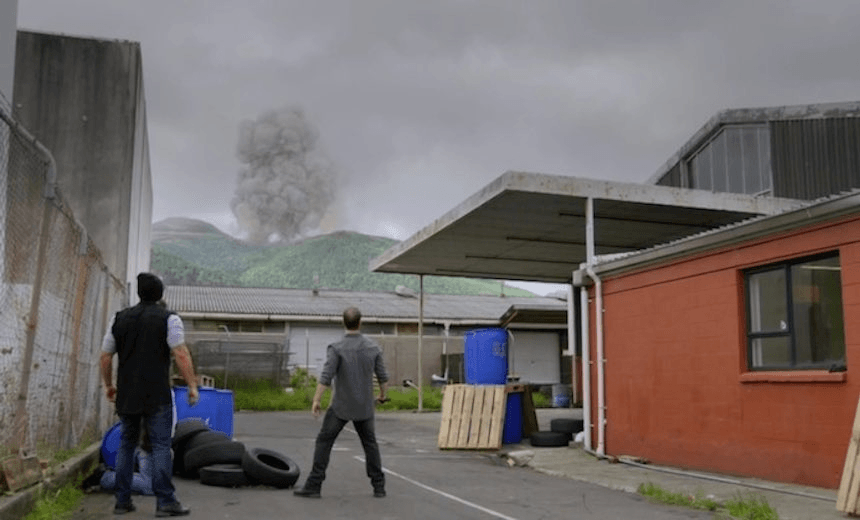 Where were you the day a deadly volcano erupted on Shortland Street?

Chris Warner found out he had leukaemia the day before his 50th birthday. Then, the day of his party, ever worse news: a volcano erupted, spewing rocks and ash and toxic gas into the sky, sending the whole town into a state of emergency. He didn’t even have time to finish his flute of champagne.

The eruption of the mighty, never-before-mentioned-in-the-last-25-years-of-Shortland-Street Mount Ferndale was an inconvenience to say the least. While Warner (still one of the best surgeons in New Zealand, if not the world) managed to make it to the hospital and roll his sleeves up, pregnant nurse Lucy and her partner Ali got stuck in traffic. “Our baby is being born in a freaking car,” she complained. Not ideal. By the time they made it to the hospital she had lost a lot of blood and was rushed straight into surgery.

A house full of teens copped the worst of the volcano’s toxic ash cloud. They had just about breathed their last by the time Drew McCaskill came to rescue them. A dog called Chops went missing and had to be rescued by heroic weirdo Damo from IT. Boyd went searching for a lost pregnant tramper, Eve, and ended up buckled over at TK’s house coughing up black tar. The tramper turned up at the hospital unharmed but raving something about Dionysus.

Marj Brasch, the original Shortland Street receptionist who had come back especially for Chris Warner’s 50th, got stuck in a lift and started planning her funeral. “A wicker casket and Kiri Te Kanawa,” she instructed her son Stuart. He was also back for the birthday bash, all the way from the States, as were Nick and Waverley, up from the ‘Naki.

The volcano wasn’t bad news for everyone in Ferndale. For the town’s mayor, the evil Mason Coutts, it was an opportunity to fake his own death and flee the country with his wife Sass, who he has been drugging, and who is also Chris Warner’s daughter. Coutts has been killing people for months – he’s already knocked off some bloke called Cochrane, and lady called Liz, and then he killed Sass’ brother Frank when he came and tried to rescue her.

Meanwhile, Sass’ attempts to escape Mason’s evil clutches kept going pear-shaped. She tried to drug him but he didn’t drink enough of the druggy champagne for it to work; he hurled his flute at her in disgust. Then she tried to whack him on his big bald head with a whisky bottle but it just bounced right off. Eventually she knifed him – trusty old knife – and he got taken to hospital and arrested.

Ferndale’s going to need a new mayor – but who? Lionel Skeggins? He was there, but maybe not all there – he claimed he didn’t recognise Chris Warner when the pair bumped into each other in the corridor. “You’ve got sick on your shoes,” he said, and he was right – Waverley had just thrown up, a symptom of being pregnant for about the 100th time. “I’m a sperm volcano,” said her fertile husband.

“Nick Harrison, You can use the s-word at home but not in a public hospital” scolded Marj. It was one of the last things she ever said. The very last, before she sat down in reception and quietly slipped away, was: “Life’s too short and wonderful for regrets.” After the preceding 90 minutes of absurdity and catastrophe, it seemed like the most profound and moving sentence anyone had ever said.

Marj’s death ushered the 25th anniversary special – episodes 6243, 6244 and 6255 – into a sentimental closing montage set to the maudlin strains of ‘One Day’ by Op Shop. A bit much, maybe, but you can’t say it hadn’t earned it.

As the ash began to settle on a new, post-apocalyptic Ferndale, Chris Warner staggered around the wards in a daze. He was surrounded by chaos and carnage, but all he saw in his friends and colleagues was love and hope and humanity. Thank goodness the hospital is still standing – but has anyone checked the IV? He is going to need a bloody stiff drink after all this.