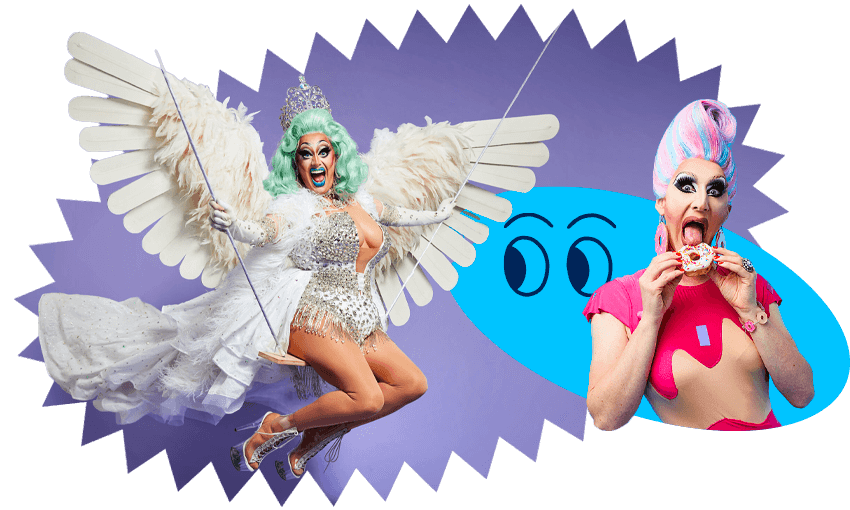 What are the NZ queens of RuPaul’s Drag Race Down Under season one doing now?

Appearing on RuPaul’s Drag Race can launch a queen into the stratosphere – so where have our New Zealand queens ended up? Sam Brooks finds out.

No reality show does more for its contestants than RuPaul’s Drag Race. When a drag performer is cast on the show, they immediately become part of a brand with millions of fans across the world.

A queen can be out in the first few episodes and still become a superstar, with her Instagram count, her bookings, and her booking fees exploding as a result of her brief appearance. Winning might guarantee a cash prize and an official title, but being on the show at all means that a contestant is a “RuGirl” for life.

The three New Zealand queens on the mildly bumpy first season of RuPaul’s Drag Race Down Under (season two premieres on July 30) came out of the show looking pretty damn good, with Kita Mean snatching the win, Anita Wigl’it being crowned Miss Congeniality and Elektra Shock making it to a respectable fifth place.

In the year since we’ve seen Elektra on our screens as a judge on Dancing with the Stars NZ. But what have our reigning winner and Miss Congeniality been up to? Turns out, a lot!

The first sign that life was different for Anita Wigl’it post-Drag Race was her Instagram follower count, which skyrocketed from around 3,000 to a an impressive 76.3K.

While her paycheques may have changed thanks to her newfound fame, Anita’s act has stayed true to the persona we saw on the show: campy, kooky and kind. “I haven’t changed what I do. I do the same shows, have the same fun, but the market is now much bigger,” she says. “Since Drag Race, I’ve had this amazing exposure to the world.”

“The only negative was, well, Covid.”

When Anita emerged as Miss Congeniality, New Zealand was less than two months away from its second level four lockdown. Not only did all her New Zealand gigs cancel for several months, but so did three international tours she was booked on – especially gutting, she says, because she had managed to negotiate business class flights.

As New Zealand emerged from lockdown, Anita returned to work. She’s the co-owner, with fellow queen and best friend Kita Mean, of  Caluzzi Cabaret and Phoenix Cabaret (both thriving) on Karangahape Rd, has an upcoming show as part of the Auckland Live Cabaret Season with Kita, and was the star of Drag Orchestrated at Auckland’s Town Hall in June this year, in which she lip-synched to songs accompanied by a full blown, honest-to-god, orchestra. Anita was even able to play an instrument in the show herself, having become proficient in the trumpet as part of the Royal New Zealand Navy Band.

“So the only option was to sing live. It was bizarre because I haven’t sung for years, but it went surprisingly well, it was just like a variety concert really!”

Most recently, Anita has been touring her solo show, The Life of a Funny Girl across the country. The tour kicked off in Whangarei this week, and she has dates all the way down to Invercargill until August.

“Basically, after Drag Race, I knew I had a window of 12 months, and I needed a product to sell,” she says. The usual avenue for Drag Race contestants is to release a song, which they can their slot into their shows, promote through their channels, and generally fill up the playlists in gay clubs. Anita decided to instead create a solo show about her life, split into four parts – getting to know her as a little boy, her discovery of drag, her relationships, and then finishing off as a Drag Race contestant.

Anita believes it’s the largest tour of a show of this style – one drag queen and their suitcase performing a play rather than gig – since the days of legendary Wellington queen Pollyfilla. It’s a full-on theatrical show, the kind that an audience has come to expect from a Drag Race queen more than a decade into the franchise.

“And it’s just so good for the soul!”

Not only was Kita Mean the first Drag Race winner in the southern hemisphere, she was the first to accept the famous crown and sceptre in her backyard, thanks to the franchise’s practice of filming several crownings and only airing the canonical one.

When we speak, Kita (118K Instagram followers) is on the road in Maine as part of War of the Catwalk, a 37-stop, two month long tour hosted by Drag Race alums Miz Cracker and Brook Lynn Hytes, featuring the likes of fellow winners The Vivienne, Kylie Sonique Love and Krystal Versace. “I’m living my wildest dreams,” Kita says. “I feel so lucky grateful, humbled and over the motherfucking moon!”

She joins the ranks of not just drag race winners, but those who competed during Covid-19 era. They’re called pandemic queens, and they had it a lot harder than most contestants who are usually inundated with bookings and gigs right thanks to their Drag Race fame. Those bookings multiply exponentially for the winner.

The pandemic queens have had to be more creative. In the early days of Covid-19, queens went from collecting tips in clubs to streaming from their living rooms. Even as the world opens up and queens can tour again, there’s still every risk those shows will be postponed or even cancelled at any moment. That’s what happened to Kita.

“However, I’m a firm believer that life is what you make of it with the tools you have,” she says. “I don’t look at any missed opportunity as a loss, I look at it as a catalyst for whatever is the next fabulous adventure on the horizon.”

For Kita, that’s a book. Her memoir, Life in Lashes: The Story of a Drag Superstar comes out later this year through Harper Collins and promises to cover the wild nights of her youth partying to oblivion, through to owning Caluzzi, and her journey to being the first Drag Race Down Under winner.

Kita found the experience of writing the memoir therapeutic. “I’m in a moment in my life where things are moving very quickly,” she says. “It was very healthy for me to take a bit of time to stop and reflect back on the crazy ride that has been my life up until this point.”

“It encouraged me to remind myself where I’ve come from and just as importantly, where I want to end up. Life is a constant journey and I am still trekking through it trying to make myself a slightly better person tomorrow than I was yesterday.”

Despite being a pandemic queen, Kita thinks she’s had a dream experience since winning the show. “The best thing about the experience for me is hearing from so many fabulous people who just shine light and love into my life,” she says. “I’ve really only had extremely lovely and kind interactions with people, which makes me feel pretty confident that I’m putting some goodness into the world myself!”