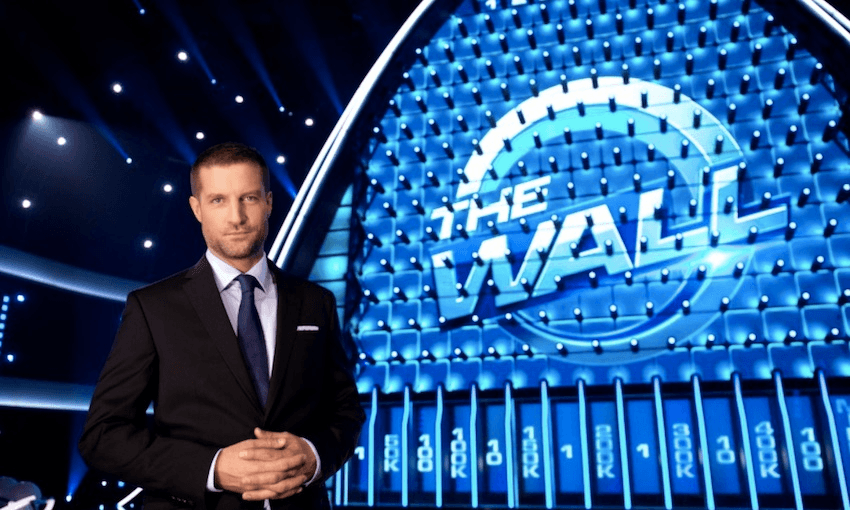 Is The Wall going to destroy the golden summer of The Chase?

Calum Henderson watches The Wall, the new extravagant quiz show that might just outrun The Chase.

This is the summer of The Chase. An episode in the morning, another in the afternoon, a Celebrity Chase most evenings – for the last couple of months it has been possible to plan your day around appointments with The Beast, The Governess, The Destroyer and the rest of the UK’s top quizzers.

It’s been amazing, but it can’t possibly last. This golden summer of The Chase is a sure sign that the show’s popularity has reached its peak. Soon, a new quiz show will emerge to take its place. It’s the natural order of things – remember it was only a few years ago we couldn’t get enough Who Wants to be a Millionaire? and the inferior Millionaire Hot Seat.

For all we know, the next show to capture the public imagination and render The Chase obsolete could already be in production. Just please don’t let it be The Wall.

Originating in the US, where it was created by basketball superstar Lebron James (among others), The Wall has already spread to over 20 different countries since 2016. Its universal appeal seems to be that it offers potentially huge prize money while requiring very little skill and strategy. It’s a show so simplistic it makes Tipping Point seem like Mastermind.

The Australian version of The Wall premiered on TVNZ 1 last night. The inaugural contestants were Chrissy and Dez, “a hard-working chippy from Queensland” and his community-minded wife who has set up a playgroup for children with additional needs. One of their own kids has cerebral palsy, and they needed $100,000 to get him a life-changing operation.

To win that money they had to conquer the titular wall – a four-storey high digital pegboard so expensive it was cheaper to fly everyone to the set in Poland than to build a new one in Australia (true story: The Wall Australia was filmed in Warsaw).

The first round is called ‘Free Fall’. The host, former Home and Away actor Axle Whitehead, asked the couple a question (sample: “Who is the eldest child of Charles and Diana?”) while three balls bounced down the wall. Two of the balls landed in $1 slots while the third landed in the lucrative $10,000 slot. Since Dez and Chrissy answered correctly, the balls lit up green and they suddenly had $10,002 to their name. Any questions answered incorrectly would see the balls light up red and the amount deducted from their total.

From Round 2 onwards the couple were split up – Dez went into ‘isolation’ while Chrissy kept doing the wall. It was now up to Dez to answer the remaining questions (all six of them – the total number of questions in the hour-long episode was about as many as you’d find in one cashbuilder round of The Chase) and explain his thought process for each answer in excruciating detail.

“The wall gives and the wall takes away,” said Axle, several times during the episode. His other one was “All money is good money.” He made Bradley from The Chase sound like Stephen Fry.

After all the balls, including various double-ups and triple-ups, Chrissy and Dez had $700,000 on the board – at one point it had been as high as $2 million. The twist was that Dez, in isolation, was none the wiser about any of this. He just had to choose whether to sign a contract guaranteeing the couple $240,000, or tear it up and take whatever was on the board. For all he knew it could have been nothing, or it could have been as much as $12 million.

The whole show builds toward this one moment of blind luck: would Dez tear up a cheque for $240,000, or sign away his family’s newly-won millions? Would they ever forgive him – would he ever forgive himself – if he chose the wrong one?

The hard-working chippy from Queensland signed for the guaranteed $240,000, more than enough to get his kid that operation. “The Wall is created for one reason, and that is to change lives,” Axle said triumphantly. A nice idea, but there has to be a better way of doing it than this weirdly heartless money scramble.

The Wall airs Tuesdays at 7.30pm on TVNZ1