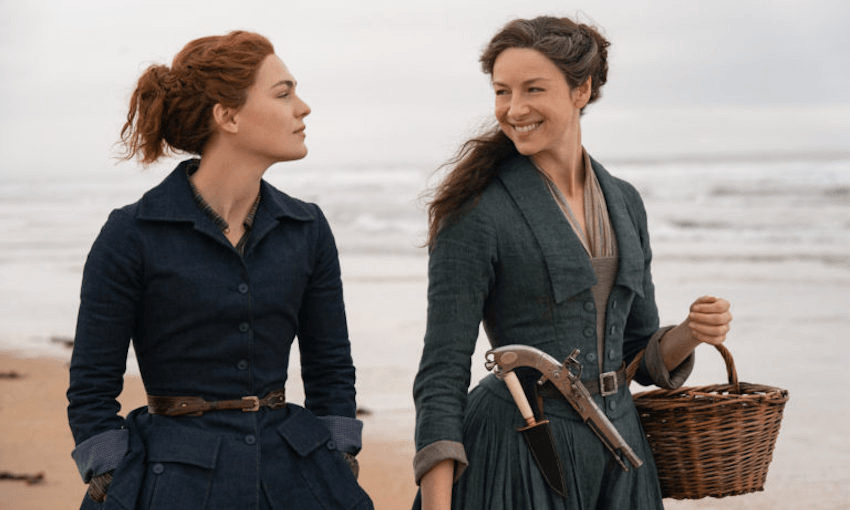 It is alert level Outlander in that century.

Outlander recap: Murder, misery and monsters of the deep

It is alert level Outlander in that century.

Everyone wants to kill Stephen Bonnet, but which one of the Frasers will actually get to do it? Tara Ward recaps season five, episode 10.

Friends, I’m still recovering from Jamie Fraser dying and then being brought back to life by his wife’s magical boobs, so to have Outlander throw crisis after crisis at us this week was a lot. This episode was a venomous snake that dug its fangs deep into us, and we became post-bite Jamie Fraser, all dazed and confused with dodgy lockdown hair and whispering that everyone must “follow the wind home”. Follow the wind? I’ve stayed inside for five whole weeks, I don’t even know what air feels like any more.

What I do know is that Jamie Fraser was so restored by Claire’s snake fang syringe that he bounced into this week’s drama like a big ginger rubber band. Alas, this is not the time to abandon social distancing to celebrate, because Stephen Bonnet was still spreading evil throughout colonial America, and we did not sit through an episode of flesh-eating maggots to put up with this sort of shit. Jamie and Roger need to kill Bonnet ASAP, so we can follow the wind home to Fraser’s Ridge and eat wild strawberries and mashed potatoes and dye all our clothes blue again.

Good news: Bonnet is dead, and no amount of flesh-eating maggots can save him now.  He died a gruesome death, but only after he attacked Claire and held Bree prisoner in his island lair. He wanted Bree to make him a better man (top tip: eat with a fork), but then forced her to watch him fornicate with a prostitute before selling her to a lecherous swine who liked women with all their teeth. In other news, Jocasta was nearly killed by a cushion and the Fraser men had fisticuffs in a boathouse. All this in 58 minutes? Be still, my weary lockdown heart.

The Frasers were ready to unleash their cunning plan to kill Bonnet and save Jeremiah, a child so precious they left him at home with only Lizzie to protect him. It was a delight to watch the Frasers casually discuss their next murder over lunch, like they were in a colonial version of Peaky Blinders, or Eastenders when Sharon’s husband got tangled up in the cockney mafia. Either way, I am here for it. Claire is a bad ass, and the sooner she embraces her gangster side, the better.

While Jamie and Roger argued into the testosterone winds about which one of them should kill Bonnet, Bonnet outsmarted them all and followed Claire and Bree to the beach. We could talk about Outlander falling into the tropes about how women shouldn’t go anywhere alone, or how they need men to fight their battles, or how the show needs to find its feminist feet again, but these are tough times. If watching Claire collect shells on the beach while the men do blokey stuff sparks joy, then we must cling to it like a viper hanging off Jamie Fraser’s inner thigh. Shells are pretty and full of calcium and running along the beach is fun too. Run for your lives, ladies, there’s a bad man coming to get you.

In fact, it was a lousy week for Outlander women. Jocasta nearly died on those beautiful blue couches of hers, which in fairness seem a nicer place to meet your maker than on the forest floor staring up at Roger’s unconcerned mug. Jocasta was the victim of crooked lawyer Forbes, who became enraged when she dished out her fortune to everyone in America apart from him and his BFF Bonnet. Did Forbes also need Brianna to make him a better man? He smothered Jocasta with a cushion until Ulysses burst in and calmly broke Forbes’ neck, thus saving Jocasta’s life and those lovely couches from some nasty stains.

Teamwork also made the dream work at Wilmington, where the Frasers saved Bree just as she was being shipped off as a sex slave. Outlander tried hard this week to make us feel sorry for Bonnet, having him cry over Moby Dick, because even whales want to be better men. Look, it’s not Bree’s job to save Bonnet, and based on his choice of creepy toys, he’s beyond redemption. Bonnet can get in the sea, but it’s a sad goodbye to Ed Speelers, who gave us Outlander’s greatest villain since the French monkey that bit Bonnie Prince Charlie on the hand.

Roger beat Bonnet to a pulp, Bonnet was sentenced to death by drowning, and Bree shot Bonnet in the head. It felt like a season finale, so where do we go with two episodes left in this season?  It’s hard to know, but as long as we can follow those warm Fraser winds home and as long as Claire has plenty of shells, everything will turn out fine.