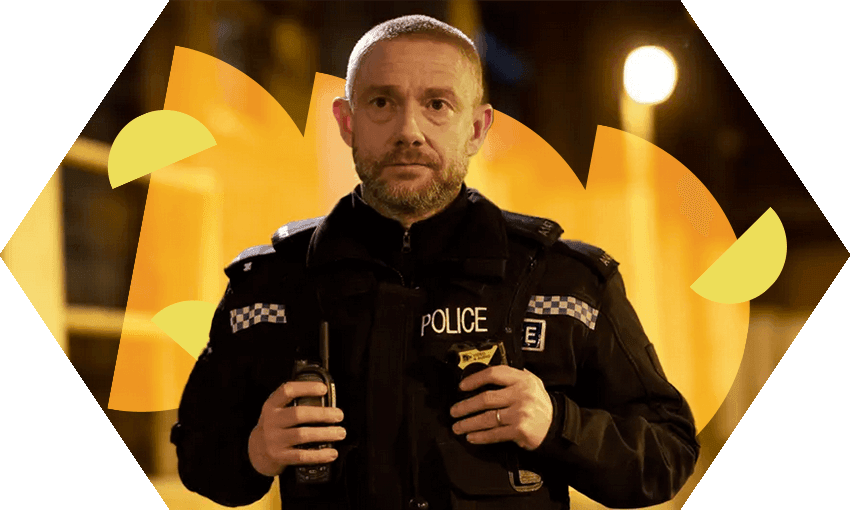 Everything you need to know about nail-biting new police thriller The Responder.

The Responder is the new five-part BBC police thriller that landed on TVNZ+ earlier this month. It’s basically a gritty mix of Line of Duty, Cracker and Prime Suspect. Martin Freeman stars as Chris Carson, a well-meaning but conflicted police officer who finds himself on the wrong side of the law. If you’ve ever wondered what would happen if Tim Canterbury left Wernham Hogg and joined the police (and who hasn’t?), this is it.

You mean the Martin Freeman who played Tim in The Office? Old mate Bilbo Baggins? Dr Watson from Sherlock? The nude body double from Love Actually?

Yes, Freeman’s had quite the career, and his incredible performance in The Responder might be his best yet. For starters, he does a convincing Liverpool accent, looks haggard as hell, and he’s playing a copper in a bit of strife. Give him all the awards.

Seriously, what could be more troublesome than Tim’s romance with the lovely Dawn?

Carson works as police urgent response officer in inner-city Liverpool, which means he’s the first to arrive at emergencies like sudden deaths, domestic disputes and car accidents. He works alone and at night, and spends every shift lurching from one stressful crisis to the next. “It’s whack-a-mole, but the moles wear tracksuits,” he tells his counsellor in episode one. Every night there’s blood on his boots and spit on his face, and Carson isn’t coping. He doesn’t have better work stories. It’s less Hot Fuzz, more bad buzz.

That sounds complicated enough without bringing animals wearing tracksuits into it.

There’s also Carson’s compromising friendship with the local drug lord, his regular threats to kill people, and the fact he steals from dead people. He’s also got a sick mother to look after, the legacy of a violent father to deal with, and a troubled marriage to fix. The bloke has a lot on his plate.

Listen, if I want bleak, I can just watch David Brent’s dance.

The Responder is dark (literally, it’s filmed mostly at night) and intense, but Freeman’s portrayal of a cop on the edge will keep you glued to the screen. His performance is hugely compelling, and you’ll feel everything from sympathy to disgust towards him in a single scene. Carson has become a shell of a man, but he’s juggling his desire to be “a good bobby” and a good person with the unrelenting, brutal realities of his job. It is bleak, but there’s also hope. You hope Carson will feel better. You want him to stop stealing soup from dead people.

Bilbo Baggins wouldn’t put up with that sort of shit.

That’s a story for another day, but one of the reasons The Responder is so gripping is because it feels authentic. The series was created and written by former first responder Tony Schumacher, who brought 11 years of his own front line policing experience to the script.

The Responder is a police drama, but it also captures how society treats its most vulnerable, how poverty forces good people to make bad decisions, and how an under-resourced police force will never make a difference. Carson isn’t stopping crime, he’s simply dealing with the consequences it, often in violent and unpredictable ways, and the people he meets every night are as desperate and full of rage as he is.

Are you sure this isn’t actually a documentary?

I am approximately 100% sure, which is the same amount of pea and ham soup Carson took from an old dead woman. Not all police behave like him, but there’s more to learn about why Carson insists on working alone, and whether he used to have a well-respected career in the police force, and whether he was always this angry. I’m sure Carson’s past will become clearer to us as he drives around Liverpool at three in the morning helping out his drug dealer childhood BFF and picking up body parts.

So there are more layers here than a bowl of cold soup?

Exactly. The Responder is the perfect TV package – fast paced and tightly scripted, plenty of twists and turns, and some dark humour chucked in for good measure. The supporting cast is solid and the tension high, but it’s Freeman’s captivating performance that will stay with you long after the show ends.

The Responder is available now on TVNZ+.