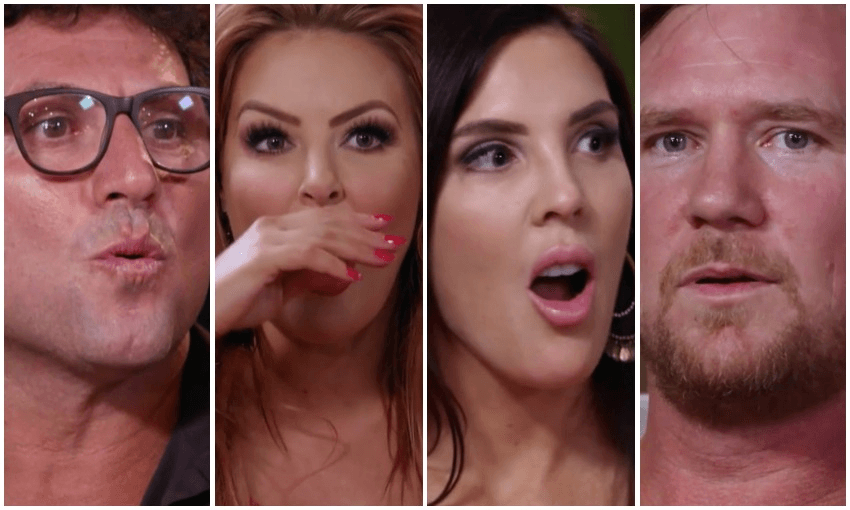 Key learnings from an explosive final week on MAFS Australia

Alex Casey watches the final week of Married at First Sight Australia, and comes away with some important lessons for the new season of the New Zealand franchise.

It’s been a difficult relationship with Married at First Sight Australia. Late nights have meant I haven’t always been there and, when I made the effort, sometimes the drama has become too much to handle. I’ve zoned out for extremely long periods of time, my interests have wandered, I’ve flirted a lot with other contenders and thought about leaving the marriage altogether. It’s not you MAFS, but it’s not me either.

It’s Troy. And Dean. And Davina. And Nasser’s Y-fronts. And Dean’s rapping.

This week, MAFSAU won me back, kicking and screaming and pillow-crying all the way to the dramatic vow renewal ceremony and a final dinner party, all topped off with a delectable reunion. As we gear up for another season of MAFSNZ this year – with Lisa Lewis tipped to be stepping up to the altar??? – here are a few simple tricks we can steal to make the next season as deplorable and entertaining as a can of tuna first thing in the morning.

The end of MAFSAU saw several couples split up and grapevine straight on over to the nearest single contender to find their true forever loves. Take Troy and Carly, who shacked up extremely fast after their respective break-ups and treated us to a shot of them in bed, Carly running her hands through Troy’s tuna-soaked chest hair. “My fuzzy bear,” she cooed. I love it and I absolutely, unreservedly hate it. Also: Tracey and Sean. Also: Nasser and his steam mop.

Look, Dom sending a text to the person that the text was about on MAFSNZ was suitably hilarious – especially given that his phone was literally a slice of cheese with some Smarties stitched onto it – but MAFSAU proved that the text and/or sext scandal is here to stay. We had Dean texting Davina, Tracy sexting Dean, and Ashley getting rarked up that she didn’t get a courtesy text from Carly or Troy to inform her of their disgusting new-found love. The SMS is officially here to stay, and when I say that I mean… Seriously Munted Stuff.

While I will freely admit that Pani and Tony were the mum and dad I never had, I still can’t help but feel like they could just have had more fun with it. By the end of the experiment, the MAFSAU trio of experts were glued to the screens just like everyone else, occasionally belching out inane, stunned, commentary. “Tracey… is… kissing him… on the lips?!” was a cracker from former war correspondent Trisha Stratford. Experts, they’re just like us!

Vicky made Andrew cut his hair on MAFSNZ, but nothing came close to Sean’s completely bonkers, head-to-toe, full body vajazzling. Look at him. The glitziest jacket in Goldmember’s wardrobe. White jeans. Platinum blonde, noodle-crisp hair that only Chris Warner and Simon Barnett could have cooked up in a lab together. Sean got owned for his new look at the dinner party, being called everything from “a gold bar” (cool) to Ellen Degeneres” (also cool). Sensational scenes.

5) Find our own Jo to be narrator

Say what you will about Jo, but even the wryest of sceptics will admit that was definitely wearing foam wedge sandals that said “foxy mama” on them in diamantes. “Feel like I’m in the great ocean road race, mate,” said Jo, of the tumultuous dinner party extravaganza. I don’t know what any of those words mean, but I’m with you forever, Foxy Mama.

All I’m saying here is: I love Telv. Yes, hashtag masculinity so fragile and it’s probably “bad” that he doesn’t like to be seen crying on camera, but as he welled up behind the cushion all I wanted to do was stroke his lacquered hair and tell him that everything would be OK. Viva la Telv.

7) Crucially, we need even more mega-uber-super-villains

We had Ben and Vicky, whose pretty committee ruled MAFSNZ in a freaky Regina George-style reign, but nothing came close to the layered villainy of Dean and Davina. “I never thought that I would not be the centre of attention,” Davina said at the dinner party, before bringing out the world’s biggest wooden spoon to stir hundreds and thousands of pots on the boil.

Where Davina well and truly leaned in to her specific brand of aloof evil, Dean went on a journey from vill to hero to vill to kinda sad dumped man. Never forget that he definitely said out loud, disparagingly, about a woman, that “her looks aren’t her best quality.” Still a feminist, though.

8) Forged in the MAFS fires arises a Bachelor phoenix

Ryan went through a very specific, Davina-based hell this season, but with him now allegedly in talks with The Bachelor, the horrible tattoo and general nightmare might all have been worth it. “You are going to win a million girls hearts,” said Davina. “I only need one,” replied Ryan. BOOM. There it is, a Bachelor soundbite for the ages.

So who could we rip from MAFSNZ here and throw into the fairy lights of The Bachelor NZ mansion when it (hopefully) returns one day? Dom? Argh. Haydn? Argh. Andrew? Aaaarrgh. Forget I ever said anything.