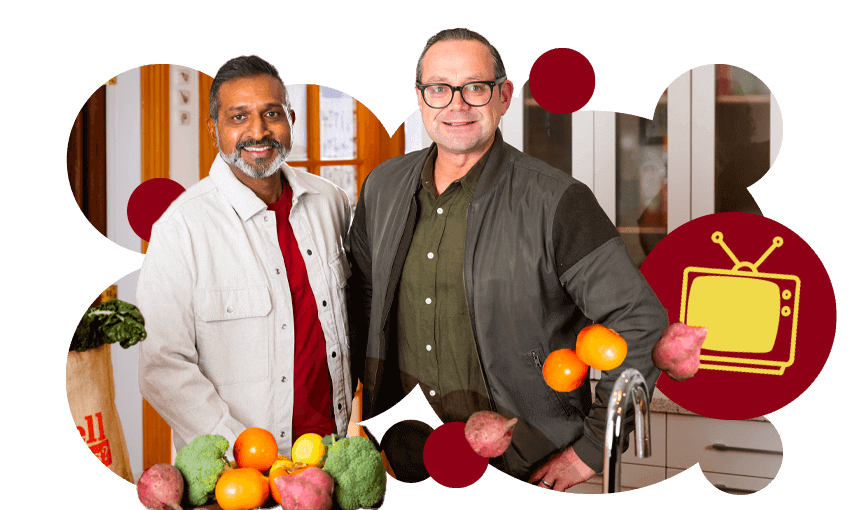 The show that wants to save you money and make you healthier is back with a new season. Tara Ward tuned in.

Food prices are rising, the cost of living is skyrocketing, and everything feels bad all the time. Good news, then, that lifestyle series Eat Well for Less NZ has returned for another season of helping New Zealanders save money and make healthy food choices. Chefs Michael Van de Elzen and Ganesh Raj are about to change lives, and we’re about to experience the tepid glow of satisfaction you get when you save $1.65 by swapping your favourite brand of chocolate milk for a far inferior alternative.

Every episode sees Michael and Ganesh on a mission to help a New Zealand family to cook, shop and eat better, and this week they meet Auckland parents Summer and Winston after their weekly grocery shop. The couple have a young son and run their own business, and they’re living in a sleepout in their parents’ garden while they save to buy their first home. It’s little wonder they’re tired and bored of cooking, and end up enjoying the abundance of cheap and convenient takeaway options near their home.

That’s a heck of a saving, but EWFL NZ is sponsored by Countdown and the show is essentially an extended advertisement for the supermarket chain – it seems a bit rich to point the sticky bun finger at shoppers for spending too much money on things they need or enjoy without mentioning that the New Zealand supermarket duopoly makes a million dollars in profit every day.

Life is shitty enough without being able to treat yourself to your favourite brand of chocolate milk every now and then, but thankfully Michael and Ganesh go easy on the shame. They’re not there to get rid of all the treats, but to support families by identifying simple ways to save time and money and improve their health. They encourage Summer and Winston to cook smarter, which to Michael means chucking a piece of string over a pot and using it to slice up some handmade gnocchi batter.

This is where EWFL NZ falls down like a house made of Countdown dominoes. Michael hops with joy as he introduces the time-poor couple to a recipe that requires cooking one ingredient three different ways, and he’s delighted to show them how to slice gnocchi with string. His recipes involve a fistful of butter, six eggs, sage leaves, parmesan and prosciutto, and while I’m not head of the Business Round Table, these items don’t seem the most budget-friendly right now. Michael doesn’t appear worried, moving quickly on to “thinning out the chicken”, words that will be music to the ears of frazzled parents everywhere.

At this point, I would simply chuck everything into the slow cooker – including the string – and run myself an expensive bath of chocolate milk so I can reflect on a life filled with poor choices. EWFL NZ, however, takes us to Snow Planet, where four volunteers are blind taste testing five different brands of chocolate ice cream in an attempt to prove it’s not always worth spending a truckload of money on something that isn’t good for us.

What makes a good chocolate ice cream? “When you can taste the chocolate in it,” one volunteer replies, and we’re off to a cracking start. The team taste their samples, and unknowingly declare the most expensive brand as the tastiest. Lewis Road Creamery Chocolate Truffle with Ganache shits all over the cheaper, shorter-named ice creams, and having scored an embarrassing own goal, EWFL NZ backs slowly away from Snow Planet, no doubt vowing to never mention the words “chocolate” and “ice cream” ever again.

But Countdown won’t be beaten. Ganesh speaks to the proud managers of a flash new store in Auckland, built to be the most sustainable supermarket in New Zealand. It made me wonder, if Countdown is the equivalent of Lewis Road Creamery Chocolate Truffle with Ganache, and EWFL NZ wants us to embrace cheaper equivalents to improve our lives, then shouldn’t EWFL NZ…not partner with the truffle ganache of supermarkets?

Look, I’m just asking questions. I’m merely a piece of string over a pot, sweating my way through life and shedding hairs into batter wherever I go. EWFL NZ has the best intentions and wants to make our lives better, and Summer and Winston bravely put themselves on the telly and gained the knowledge to save a whopping $178 a week (don’t buy takeaways, save $2.65 by swapping your rice crackers). But in the current climate, where supermarket profits are through the roof and hard-working families are struggling, is it really Summer and Winston who should have to change?

Season three of Eat Well for Less NZ screens on TVNZ 1 on Tuesday nights at 7.30pm, and is available to stream on TVNZ+.