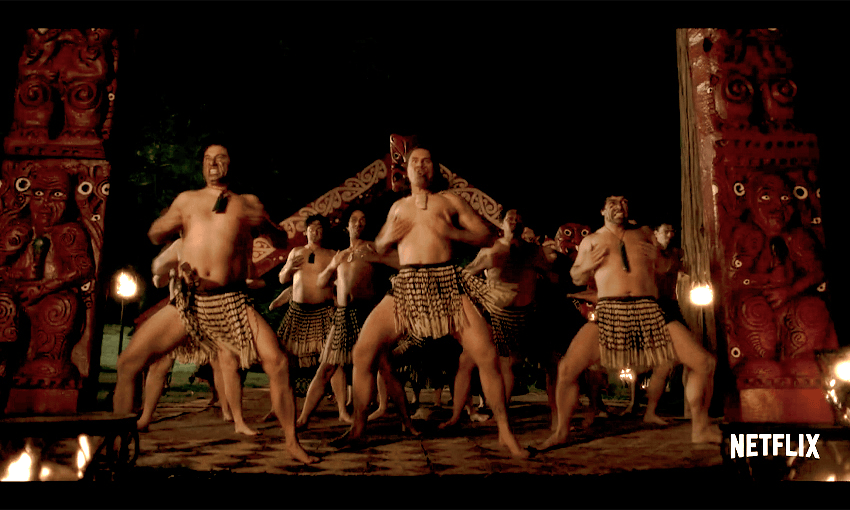 A new trailer for season four of The Crown dropped overnight, and big news, Aotearoa: we’re in it. London-based Māori group Ngāti Rānana has confirmed they were involved in filming a haka scene.

The fourth season of Netflix’s award-winning drama about the life and reign of Queen Elizabeth II premieres next month, and a new trailer gives us a delicious taster of where the drama will lie. Predictably, some of it takes place in Buckingham Palace and Westminster Abbey, but hold onto your tiaras, because all the important drama goes down in New Zealand.

This bold statement is based on approximately 0.8 seconds of trailer footage that includes a haka and a sad princess, but what is life without risk? I’m the Queen seeing a cow, I’m Paddy Gower halfway through election night. I’m going out on a royal limb and I’m going to call it, and say this season of The Crown is all about New Zealand.

Season four follows the royal family from 1976 to 1990, and features Charles (Josh O’Connor) and Diana (Emma Corrin) on their six-week tour of Australia and New Zealand in 1983. This was the famous visit when baby William tried to eat a Buzzy Bee on the grounds of Government House, and when the belief in the royal fairytale was at its peak. Charles and Diana visited places like Wainuiomata and Masterton, Waitangi and Te Poho-O-Rawiri Marae in Gisborne, and it will be a sad day if The Crown does not give Wainuiomata the international acclaim it so rightly deserves.

The trailer shows Charles and Diana riding a royal wave of Antipodean public popularity, while enduring plenty of private misery. In fact, none of the Windsors appear happy, not even Princess Anne, who seems to spend the entire season riding a horse. Still, the main thing is that New Zealand is included in The Crown, right?

Charlie Panapa from Ngāti Rānana London Māori Club confirmed to The Spinoff that they were involved in filming the haka scene that features in the trailer. While he was unable to share any specifics about the scene itself, Panapa confirmed it was set during the Prince and Princess of Wales’ 1983 Australasian tour.

“Though the real tour happened in the early mild autumn, the scene we filmed was in the dead of winter,” Panapa said. “What really blew us away was that as soon as we stepped on set it was as if we were magically transported home, with ponga trees and a waharoa to complete the illusion.

“Many of us had hairstyles far too modern to read as early 80s, so there were quite a few wigs and rollers required for both tāne and wāhine.”

We won’t see this scene in full, or any others set in New Zealand, until the series drops next month.  Until then, we can distract ourselves with the first proper look at Gillian Anderson’s portrayal of Margaret Thatcher, and the tense royal face-off between Britain’s first female prime minister and the Queen (Olivia Colman, in her second and final season as the sovereign).

To be fair, Liz has a lot on her plate this season. There’s a wedding and a funeral, and she’s still fighting with sister Margaret (Helena Bonham Carter). Her new daughter-in-law insists on roller skating through the palace, and honestly, can’t a monarch get one moment’s peace without someone else demanding to be loved?

That’s where we come in, Aotearoa. Yes, we’re in The Crown, but it’s no big deal. Sure, we’re playing a key part of one of Netflix’s biggest original dramas, but we’re cool with it. Like Charles and Diana on the lawn of Government House, everything’s fine. Either way, November 15 can’t come soon enough.