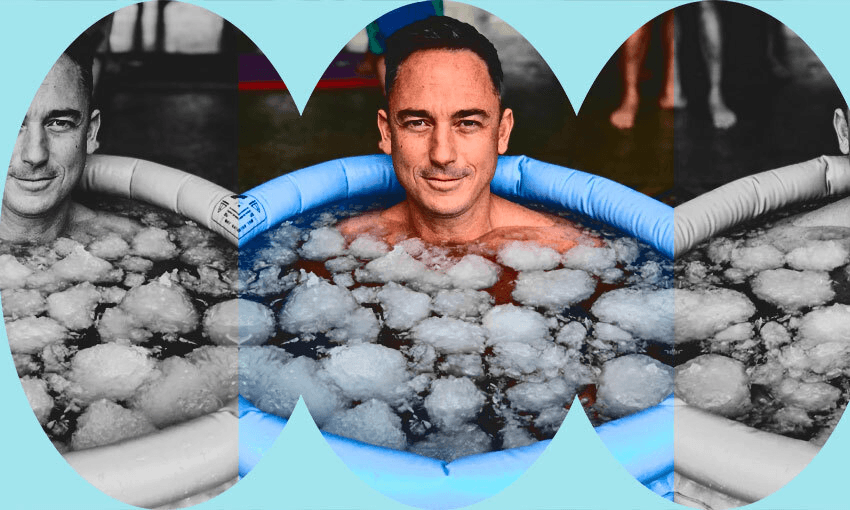 Dom Bowden’s given up reality TV for ice baths

The veteran New Zealand TV host has been off our screens since 2017. He tells Stewart Sowman-Lund why he’s swapped celebrities for wellness.

“My sister framed it as the Hunger Games and it really does feel like that,” says Dominic Bowden.

He’s probably our most famous reality TV host, but Bowden isn’t describing the next Bachelor franchise or a forthcoming TV venture. Instead Bowden, like so many other New Zealanders around the world, wants to come home for Christmas. Stuck in Los Angeles, Bowden says the so-called managed isolation lottery – not due to be scrapped until next year – is now embedded into his daily routine. “Sometimes you have to wake up in the middle of the night, then you get placed at 8000 in the list. Then you just go back to bed,” he says. “The last time was the toughest because there were 4500 rooms and we were at 4900. So we waited for two hours and then the spots were gone.”

Bowden’s been back and forth between New Zealand and the States for a few years now, working on television projects in both countries. He’s been a staple on our screens for two decades, perhaps most famously as the host of New Zealand Idol in the early 2000s. He followed that up with a similar stint on X Factor NZ a few years later, then Dancing with the Stars and a one year run on The Bachelor, infamously replacing Mike Puru. And those are just the big ones: remember Are You Smarter Than a 10 Year Old?

But then, like many of the contestants on the shows he hosted, he vanished. The last time I saw Bowden, he was emceeing a VIP event at a U2 concert in late 2019. IMDB lists his last TV gig as being in 2017.

So what happened? Bowden says he realised that being the face of reality TV shows wasn’t necessarily all he wanted to do with his career. “I love making television and the experience of making live TV, and the doors that opened by coming to America,” he says. But when he turned 40, he started to question what he wanted to do with his future. “I felt rudderless. I wasn’t too sure if just hosting reality television shows was something I wanted to do for the rest of my life,” he says. The difficulty came when deciding what to do next, a relatable thought for anyone that has “fallen into” their chosen career. “I did a degree many years ago,” says Bowden. “But I was lucky enough to end up on Squirt [the children’s TV show] while still studying and that led me down this path.”

Now, Bowden’s pivoted – and he doesn’t know if he’ll go back to TV at all. He’s started a podcast, and while that’s not unexpected – who in the world of television hasn’t got their own podcast these days? – the fact that its subject matter is so far from the world of celebrity and reality TV is something of a surprise. Called WellBeings, the series is aimed at assisting himself, and others, navigate the world of self-help. Over its six episodes, Bowden looks at issues like how to “break up” with your mobile phone or how to use breathing to become a “superhuman”. On one episode, Bowden chats to Wim Hof, a motivational speaker who has held the world record holder for swimming under ice. On another, he chats to Canadian journalist and Ted Talk speaker Carl Honoré, author of the bestseller In Praise of Slow.

While the subject matter is a fairly major u-turn, WellBeings still allows Bowden to do what he enjoys most: interviewing. Alongside those reality gigs in New Zealand, Bowdon also had stints as an interviewer on lifestyle network E! and as the backstage host for Dancing with the Stars US. Talking to people has always come naturally, but “I wanted to be in service a little bit more,” he says of the decision to swap interviewing celebrities for wellness experts.

It’s clear Bowden’s passionate about his new venture; we talked almost non-stop for 45 minutes. “I can ramble sometimes,” he jokes. He says he enjoys being able to talk freely without having to regurgitate “selling points” pre-written by an X Factor publicist. “All of a sudden you’re talking about stuff that’s quite personaI,” he says. “I’ve worked at Lifeline on the phones and little things like that are a stepping stone to this.”

And so, in the aftermath of the first wave of the Covid-19 pandemic, the concept for WellBeings was born. Stuck in New Zealand when the borders closed in March 2020, Bowden says he noticed that many of his friends were struggling to stay mentally healthy as the pandemic took hold. He felt he might be able to help.

Another inspiration was Los Angeles’ plethora of health and wellness trends; Bowden isn’t ashamed to say he’s given many of them a go. “I love the fads,” he says. “You try meditation, the ice baths and soul cycle – and then some of it you find really cool.” He started to wonder: “If this is helpful to me, maybe it’s helpful to other people.” Meanwhile the pandemic was also prompting him to reflect on his own way of life. “I was going a little stir-crazy,” he says. “Being in front of the camera, you’re getting all your validation from external spaces. It feels good working on these big shows. But the big thing, for me, was how could I look a little bit more internally?”

While home in New Zealand, he started a “breathwork brotherhood” and suggested his friends try things like ice baths – which he calls a “gateway drug” for wellness practices and a great way to feel alive and get out of your head. “The good thing about this is I’m no way an expert, I’m just trying to learn too,” Bowden says. “For me, habit is a big one: getting up in the morning, doing some breathwork, doing some exercise. But it’s about being open.”

Bowden’s aware of the risk of the “wellbeing” label. For many, that’s a word now synonymous with exploitative anti-science or anti-vaccination ideas. WellBeings is not like that, he says. “It was about ‘how do you look at what’s based on science’. And it’s free, so it’s not only for people who have lots of available spare income.”

Bowden ultimately returned to the US later in 2020. He caught Covid, after being vaccinated, which he says was “no joke”. But despite all that LA has to offer, especially in the wellness space, he says New Zealand is where he wants to be now. “I think that LA has been a great place to be based while I’ve been doing this and to get that momentum,” he says. But now it’s time to come home.

“Who knows what’s next. It’s been a really fun ride.”

You can find more about WellBeings – including links to the podcast – here.