Fake Famous, a documentary currently available to stream on Neon, tries to create three influencers from scratch. But how do you actually become an influencer? Sam Brooks offers some (dubious) tips.

Are influencers born or created? If you believe Fake Famous, it’s a little bit of both, with an emphasis on the latter. The premise of this new documentary by former New York Times journalist Nick Bilton is that you can create one from scratch, from zero to verified overnight. The film, framed as a social experiment, plucks three people from relative obscurity in order to turn them into influencers. There’s sweet aspiring actress Dominique, budding fashion designer Chris and the anxious Wylie, who just wants a gateway into a livelier gay community. Who will rise and who will fall into obscurity, surely the worst fate among the extremely online in the 21st century?

Let’s step back for a moment, though. What, exactly, is an influencer?

An influencer, according to social media expert Taylor Lorenz in the documentary, is one part entrepreneur and one part celebrity. The job is all about turning your name, your face, your words into a brand to be partnered with and sponsored. The industry isn’t going anywhere either: in a recent report by the Tertiary Education Commission on the career aspirations of New Zealand children, the fourth-most-desired job was social media/YouTuber/influencer.

So how does one become an influencer, exactly? It helps if you’re already famous, but for the unwashed peasants among us, it’s a career track that requires a bit of work to even get started. Luckily, I’ve watched Fake Famous already, so I’ve got some of the best tips from the movie for you, as well as my own from observing the world. If you want to be staring into your front-facing camera for that sweet cash, look no further than my expert tips.

(Note: I have no experience in influencing, beyond telling people what they should think. I think of that as charity, as it is mostly unpaid and deeply annoying, so it probably doesn’t count for this piece.) 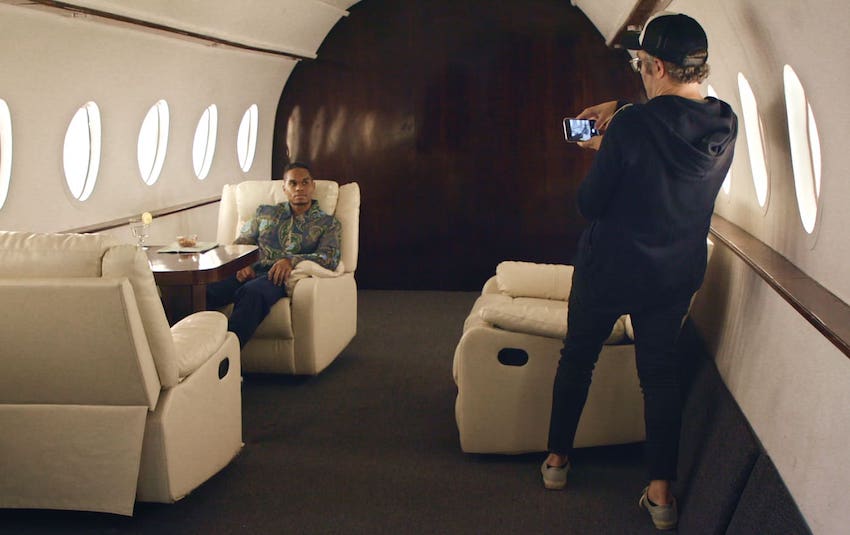 Spoiler: that is not a real private jet. (Photo: HBO)

Make your life look better than it really is

A key part of the word “influencer” is influence. It’s literally 90% of the word. That means if you’re an influencer, your life needs to be aspirational. Nobody’s aspiring to your mattress-on-the-floor, empty-alcohol-bottles-on-the-windowsill lifestyle. It’s fine if that’s how you live, but don’t let people know that’s how you live.

One of the main ways, if not the main way, that Bilton gains influence for his chosen three is by simply buying them followers. In order to game Instagram’s algorithm, the fake followers (bots!) follow him in a trickle rather than all at once. It’s kind of terrifying: you can buy bots that are so specific that you can choose their location, their demographic, and even what they look like.

The idea is, of course, to make it seem like you’re more popular than you actually are. These bots aren’t a new concept – they were instrumental in both the Brexit referendum and the US election in 2016. While Instagram seems like a fairly benign usage of them in comparison, considering the hundreds of millions of dollars that are spent on influencers, it’s still a problem.

But hey! These aren’t (dubiously sourced) tips for being a nun, they’re tips for being an influencer. Get those followers, whether they have a pulse or an algorithm, you rascal.

Find a lot of places that look like other places

Another key part of Fake Famous is the fact that influencers, at least ones at this level, often stage photoshoots in fake places. One notable one is a fake private jet interior that rents for $49.99 an hour, which is obviously less than an actual private jet. There are more benign dishonest interiors, like a space that looks exactly like a private gym in Beverly Hills but is actually just a warehouse with gym equipment (although I’d argue that also describes most actual gyms these days too). Chris working out in this fake gym actually leads to him getting contacted by a real private gym for a partnership.

Remember: the camera only captures what you put in front of it, and the audience only sees what the camera does. Nobody knows you sleep upon the aforementioned floor mattress if they only see you posing on the couch.

Make friends with other influencers

Real life story: a friend of mine was tagged in a photo of a Shortland Street star on Instagram and saw his followers increase from several hundred to the low thousands overnight. My friend isn’t an influencer and has no interest in being one, but if you were, that’s a hell of a boost.

Influencers are self-perpetuating. Tagging someone in a post introduces your followers to theirs and vice-versa. Forget people’s names, only remember their handles. Names are weights, dragging us down. Tags lift us up, inflate our follower count, and set us free. If you have brunch but didn’t photograph it, did you really have it at all? (Photo: Getty Images)

This extends to locations! I have spent the past three years tagging bowling alley Metrolanes as the popular, upmarket, photo-friendly spot SPQR. I think it’s hilarious, but nobody else does. I am not an influencer. This has not increased my following. Do as I say, not as I do.

But seriously: tag brands – that’s how they know you’re keen to collab. Tag locations – that’s how people know you were there. Those @ and # keys on your phone aren’t just for show. They’re there to be used and overused. If your Instagram story can’t be used to track you if you go missing, were you ever found to begin with?

Consistency is key to pretty much every job, and influencing is no exception. If you post daily, continue to post daily. If your Instagram story tab looks like a ruler, you better keep it looking like a ruler. Consistency is comforting. It’s so comforting that many influencers didn’t let a global pandemic stop them, as the film shows. Influencers posted pictures of them on beaches that were definitely closed, in hotel rooms that were not available to book, and in places that everybody wanted to be but legally couldn’t.

Stay away from rabbit holes

This one is more of a good rule in general. Don’t spread misinformation or conspiracy theories. Unless you’re an epidemiologist, nobody follows you for your reckons on Covid-19. Check yourself before you cancel yourself. It’s not a lifestyle, it’s a job

One interviewee mentions, offhandedly, that she once paid $80,000 to an influencer for one post and two tweets. You might not think that it’s work, but honestly, if you pay me $80,000, I’ll tweet a hundred times (or even stop tweeting entirely. I just want $80,000 please).

The work that goes into maintaining the image of an aspirational life might be harder than actually having an inspirational life, though. There are the constant photo shoots, outfit maintenance to make sure that nobody sees you in the same thing twice, and planning your posts so you’re not doing the same sort of post twice. If it doesn’t sound like work to you, it definitely doesn’t sound like fun.

One of the more revealing parts of Fake Famous, and arguably its most valuable point, is the toll that being famous (even fake famous) takes on these otherwise normal people. Wylie, in particular, starts being trolled once people realise he’s bought fake followers, and he decides that it’s not worth the effort. Posting isn’t fun any more, and it’s not making him happy. There’s a heartwarming moment – or chilling moment, depending on where you stand – where he posts after not posting for a while, and watches the likes roll in.

He smiles. People like him, or at least his photos.

Maybe that’s worth more than being an influencer after all.

You can watch Fake Famous on Neon here.