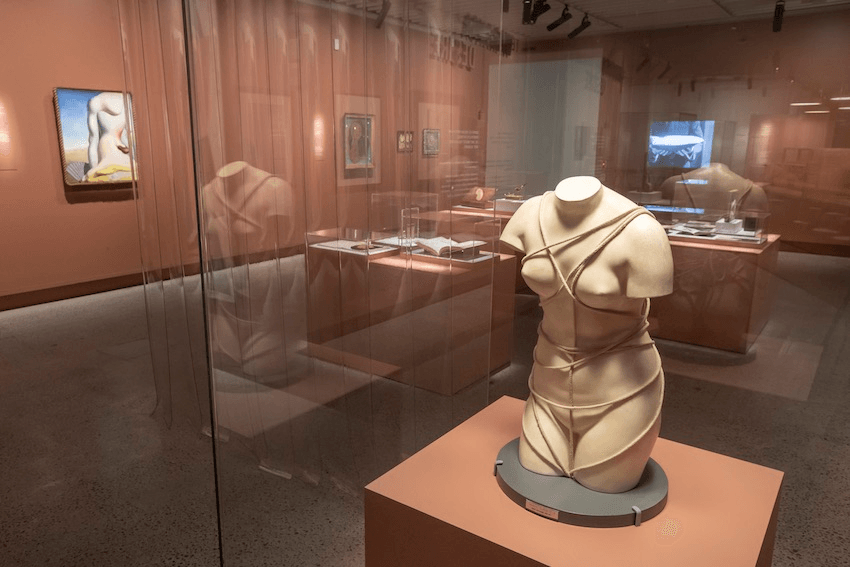 Megan Dunn spends an afternoon with the surrealists at Te Papa’s blockbuster exhibition and manages to leave without buying a sweatshirt of Man Ray’s flat iron.

“Mummy, is that woman doing a poo?”

I see instantly what my daughter means. The brown curve near the backside of that melting torso takes on a faecal connotation. But why is that anatomically incorrect white trunk so unmistakably female anyway? Is it the pink hued hips, the white pendulous moobs dripping down, or that purple fan waiting for a-flutter? Perhaps it is the buttercup silk sheet in the foreground accentuated by the lace cloth. Afternoon by JH Moesman is a cracking oil painting, one of the many standouts of Te Papa’s surrealist art exhibition, partly because it’s a surprise.

I knew nothing of JH Moesman, allegedly “the only real Dutch surrealist” who worked as a draftsman for the railways, discovered surrealism in a French magazine one day and decided to give it a go. Afternoon is framed by a coiled rope – when it was first exhibited in Amsterdam in 1933 it was deemed perverse.

And now it’s here in this naughty little room, painted ‘Au chico’, a blushing shade of brown, by sponsor Resene. It’s a great hang. Near Afternoon is a playful Francis Picabia painting, a naïve poo-bum smeared in oils gazes out of dot eyes, then at the end of the wall, Hail Mermaid (1932). A red medusa floats beneath the psychic sea, framed by spikey black coral; she holds a fish as if for a kiss. How I’d love to sit down on the couch with Willem Wagenaar and ask him what his mermaid means. But as if a surrealist would know.

‘Desire’ is an eclectic room at the back end of Surrealist Art: Masterpieces from the Museum Boijmans Van Beuningen. The show isn’t chronological but instead laid out in thematic zones: the dreaming mind, delirium, automatism, collage, etc. There’s what I want to tell you about: in ‘Desire’, Marcel Duchamp’s powdery rubber breast fixed to the cover of a book of lithographs titled Please Touch (in French); Hans Bellmer’s illicit photo-shoot with his headless dolly, a twisted protest against the rise of Nazism; Dali’s perfume bottle, Le Roy Soleil (The Sun King); his powder compact shaped like a telephone dial.

Then there’s what I have to tell you: it was in high school that I first studied surrealism, a European art movement that erupted out of the chaos of World War One, prioritising the unconscious mind, dreams, the uncanny and the irrational. When I try to write this review in order, I close my eyes and am back in my single bed in the dark, a teenager, listening to Cabaret Voltaire sing “freak yourself”, before I knew the British band was named after the Zurich nightclub where dada was born. And dada gives birth to surrealism, then Salvador Dali’s ostentatious oiled moustache takes wing…

But wait, let’s go back to the start.

In a vitrine at the show’s entrance is the Surrealist Manifesto written by Andre Breton in 1924. I’ve never read it – the book is closed – but it doesn’t matter because I’ve swallowed its ideology whole. The show first plunges you into a sumptuous all-black room, hits you over the head right away with some masterpieces – Dali’s Lovers with their Head in the Clouds, Magritte’s feet (more on these in a minute) – while an Eric Satie soundtrack plonks along, priming the subconscious for more delights. Of which there are 180, on loan from the Museum Boijmans Van Beuningen in Rotterdam, famed for its surrealist collection.

In the lusty blackness, I don my audio guide and lean into Leonora Carrington’s unfathomable oil painting, Again the Gemini are in the Orchard, the chickens in her celestial garden bristling with magical realism. Carrington is now getting her art historical dues but surrealism’s back catalogue remains dominated by men. She is the only female artist listed on Te Papa’s poster, and she is represented by this one work presumably because the Museum Boijmans Van Beuningen only owns one other Carrington.

However, I’m not in the mood to tell surrealism off. No chick gets their own room here like Dali or Magritte, but the works on offer by female artists are wonderful. Later in the ‘Automatism” room I encounter a feral circus scene scratched into black paint by Unica Zürn, who was also a writer and a collaborator of the artist Hans Bellmer. Zürn committed suicide by leaping out the window of an apartment in Paris, aged 54.

My biggest revelation? Magritte’s feet are enormous. I’d always imagined as petite those curious, dead-white toes turning slowly yet surely into leather boots. But the canvas is giant, the eyes in the wood grain intricate. “There’s two coins,” my daughter pointed at the dirt as though she could pick them up. The Red Model is decked out in a golden frame as though Magritte’s morbid feet could be hung in a dining room hall.

It was my second visit to Surrealist Art since it opened and despite the timed entry (and that visitor from Sydney) it was still packed. I suspected like me everyone had studied surrealism in high school.

“When I’m good, I’m good but when I’m bad I’m better,” Mae West famously quipped. I crouched behind the glass case. Inside, Mae’s giant lips were made out of woollen flannel and brass rivets. I looked for cracks and found some. Dali first made this plump couch in 1938 for his British patron Edward James, the original owner of many surrealist works in this collection.

In the darkness I suddenly appeared from behind the couch with my notebook.

“Shit you scared me by standing up,” a man said, taking a step backwards with his two teenage children.

The life of an art reviewer is perilous. Next my daughter decided she wanted my audio guide. My time with surrealism was short. I raced once more down the dada tunnel, pausing to listen to the nonsense poems piped through ear trumpets. In the dictionary of surrealism, reason is defined as cloud eaten by moon. Alas I don’t speak French. Also, she who does surrealism with a six-year-old does not watch the films or read the books.

Man Ray was my other big takeaway. I’d known him previously for his photograms, and forgotten about his flatiron. Cadeau (The Gift) is an iron punctuated with a line of nails glued down the middle. “There’s an object that is almost invisible, maybe I can do something with that,” Man Ray thought in 1921 when he first saw the iron that inspired it. I’m still toying with the idea of returning to the gift shop and buying the grey sweatshirt featuring The Gift for my partner, a consummate ironer.

Imagine surrealism without Dali? Impossible. It’d be like deleting ‘Bohemian Rhapsody’ from Queen’s back catalogue. The centrepiece of the show quite rightly consists of five paranoiac-critical Dalis displayed in a faux-rotunda. “Mummy, don’t look at the zombie one!” my daughter warned. Nearby, Dali’s Impressions of Africa (1938) has been turned into an immersive film. We stood in the small black room as Dali’s outstretched hand zoomed towards us – extending the logic of the painting’s composition, taking us inside his easel. When the donkey on the soundtrack brayed, my daughter laughed. Classic.

Outside the bureau of surrealism was closed – cough – so no one could write down their dreams. Never mind.

It was only second time around that I noticed three sculptures of the Venus De Milo running through the exhibition. The first by Dali, her drawers open, her furry pom-poms on display. The second Venus has her ear where her nose should be. The third, Venus Restored (1936) by Man Ray, is a torso tied up in ropes next to the the PVC strip curtain at the entrance to ‘Desire’. I thought again of Mae West, “A woman who knows the ropes isn’t likely to get tied up.” Then I left the show, doubly satisfied.

My partner however was disappointed. I’d failed to get a photo of the back of his head in the interactive scene mimicking Magritte’s Not to be Reproduced.  “The phone button wouldn’t work,” I said. “It’s a touchscreen,” he replied.