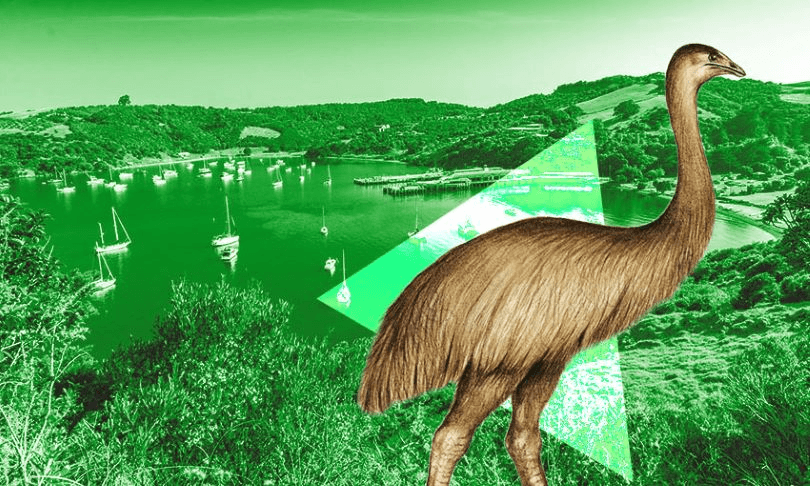 Pasifika artist Ioane Ioane behind the moa replica at the 2022 Sculpture on the Gulf. (Image: Archi Banal)

Pasifika artist Ioane Ioane behind the moa replica at the 2022 Sculpture on the Gulf. (Image: Archi Banal)

The treetop-nudging sculpture is part of this year’s Sculpture on the Gulf, which makes its welcome return to Waiheke for 2022.

The moa has been extinct for over 500 years, but the giant flightless bird is back on Waiheke Island, and looking a little different. While at four metres it’s only a little taller than the original bird, this one has a plastic drainpipe for a spine, nikau palm sheaths to give the body shape, harakeke or flax leaves stripped into fine lines to resemble feathers, stainless steel legs, scaffolding couplers to connect the legs to the body, and a carved head made of totara wood.

Based in Auckland, Ioane’s multidisciplinary practice involves sculpture, painting, installation and performance. His moa is named Te Kura Nui From Nine Heavens – Te Kura nui are the many red feathers of the ancient Māori moa, and in Sāmoan whakatauki the Nine Heavens represent the nine stages to ascend after death in order to reach the place of ancestors, Hawaiki. Ioane says he deliberately chose the word “heaven” as the moa birds are extinct and he imagines their resting place to be there.

This is not the first time Ioane has created a life-sized moa. During a residency at the Kerikeri Botanical Gardens he was challenged by the curator to make a moa, an idea Ioane jumped on given his interests in fossils and extinct animals. “The moa in Kerikeri is like the mother to the moa I’ve just made. It’s huge,” he says over Zoom from his Westmere home. The Waiheke moa is smaller, “the daughter version”, he says, but “it’s still big enough to tower over people. I’ve exaggerated its size, so that it looks like it’s feeding off the top of the trees.”

A prominent feature of the Te Kura Nui is its feathers. Ioane wanted to replicate the North Island breed, which is believed to have been extremely hairy. He started construction on the moa last November by stripping many harakeke leaves to cloak the body, so that from a distance it looked like feathers. “The old school way of stripping down the flax would be to use your fingernails. Instead I went on YouTube and watched a Māori woman use a kutu comb [a metal comb for head lice] as we call it back in the island. You only need to run the comb down the flax once to get the effect I was after,” he says.

“So I can confirm that there are no lice on my moa.”

Ioane works from home, using his carport and little garden as his workspaces for creating his massive sculptures. The moa was suspended in the carport, so that if it rained it wouldn’t get damaged. His work is usually visible from the road side, and he’s used to curious locals peering in to see what he’s up to.

One element of the sculpture that he didn’t have to toil over was its head. Because the moa is so tall he didn’t need to add many details, but don’t worry, “you won’t be able to see it fully from ground level,” he says.

Further along the trail is Scarecrow, a collaboration between artists Salome Tanuvasa, who is of Tongan and Sāmoan descent, and Kazu Nakagawa, who was born in Japan but now lives on Waiheke. The work is part of Nakagawa’s ongoing series ‘Birds do not belong to the land’.

Tanuvasa says she connected with Nakagawa following her show last year at Auckland’s Gus Fisher Gallery, for which she had created large fabric pieces. He was looking for a fabric artist to work with and suggested they create something for Sculpture on the Gulf. For her part, Tanuvasa wasn’t going to let the opportunity to work with one of the event’s most prominent sculptural artists pass her by.

She’s still learning the ropes of fabric work (painting is her specialty) but Tanuvasa says she’s lucky to have her mother, a seamstress by trade, and her brother John, a fashion designer with his own label OHN, for guidance. “I grew up with the sewing machine constantly on as Mum worked long hours. There were always fabrics, garments and off-cuts everywhere in the house,” she says. “They’ve given me insight into how to manipulate fabric, using suitable material for the outdoor environment and challenging me to look at cuts a different way.”

When Tanuvasa began brainstorming ideas for the project, she found herself coming back to the scarecrow and its role in protecting land, food and crops for the people. “My designs are quite intrusive, really jagged, and Kazu suggested I visit the space in Waiheke Island to give me more ideas.

“What I noticed was a lot of plants and natural forms and I was intrigued as to how nature already has its own sculptural element,” she says. Tanuvasa has used wire and polyester fabric, all coloured black, as “nature has its beautiful colours that I didn’t want to take away from.” Her garments drape over the human-size sculpture made by Nakagawa.

Tanuvasa began drawing up the garments last year, but production didn’t start until the beginning of 2022 and she has been at it since. “While everyone was enjoying their summer or the public holidays, I’d be working with my fabrics,” she laughs. “I can’t relax until it’s done and once it’s completed to the best of my ability and I’m satisfied with it, then I can have a proper rest.”

Sculpture on the Gulf is on the Matiatia coastal walkway, Waiheke Island, from March 4 to 27.