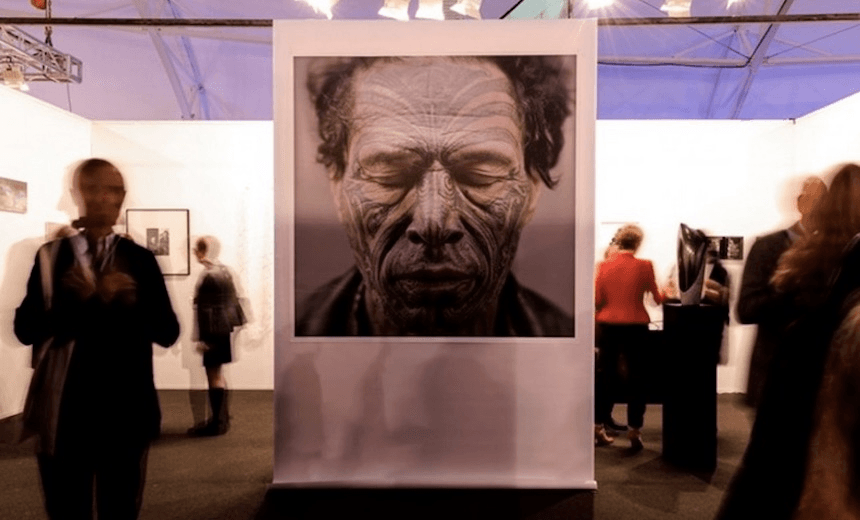 Disjointed art and unbridled commerce: an insider’s take on the Auckland Art Fair

As the Auckland Art Fair wraps up for another year, our anonymous art world insider looks back at the festival’s highs and lows.

The easiest way to describe the Auckland Art Fair, at The Cloud until today, is to say it is basically a trade fair – one large hall, many small booths, many traders exhibiting their product. But because the trade in art is not a typical trade, the AAF is also not a typical trade fair.

John Baldessari apparently said that, as an artist, attending an art fair was like seeing one’s parents have sex.  This makes sense. The unbridled commerce that goes on at art fairs is (usually) kept from view in the art business. But then again, Baldessari was probably thinking about Art Basel or some such. Galleries brought stock worth US$3.4 billion to Art Basel and sold plenty. Obviously the AAF will always be operating on a different scale. So if the AAF is like seeing parents have sex, maybe the fucking is just missionary and not as loud – ie, still disgusting but not as much as it might be?

All of which is to say that the AAF, like all art fairs, is an explicitly commercial operation. The issue isn’t that art fairs are bad because they are commercial – it feels naïve to insist that art should remain separate from the market. But works shown by galleries in a booth at an art fair are not brought together in the same way as exhibitions at a public gallery, or even exhibitions at dealer galleries, where there’s a more influential imperative to sell. Thus the point is that its best to engage with the AAF on its own terms, as an art fair, and not as an exhibition.

Also, booths at fairs are many (there are over 40 galleries presenting at AAF) and small and are presented in a pretty disjointed manner. There are artworks from over 200 artists, works that otherwise would have no business being in the same room as each other presented side by side (sometimes even in the same booth!) In these circumstances it feels more appropriate to record impressions of the AAF in the form of notes (the lack of cohesion and linear argumentation reflecting the confusing logic of the art fair):

New directors Stephanie Post and Hayley White have succeeded in putting together an event that is more convincing as an art fair than previous years. Last time there was a man literally dressed in a monkey suit painting a canvas. Apparently a few years before that the fair hired actors to dress as if they were farmers and walk around asking questions about whether or why something was “art” (a move that – if it really went down like this – manages to be simultaneously snobby and anti-intellectual). But maybe all it takes is looking at how successful fairs work overseas and doing your best to recreate it here. So congratulations to Stephanie and Hayley for exercising common sense and restraint.

The opening night on Wednesday night is an illuminating window into what the art business in New Zealand actually looks like. There is no other event that gets more of the New Zealand art world in the same place (artists, gallerists, curators and collectors travel from around New Zealand to be there). There is a strange feeling of being at once overwhelmed – it is a hyper-social event – and underwhelmed: is this really all there is to look forward to?

Galleries take different approaches to their presentations. Some like Gow Langsford, Trish Clarke and Johnathan Smart, presumably looking to maximize sales, crowd every part of the booth walls with paintings and photographs and fill the floor with sculpture. On the other hand, looking like you don’t need money can also be a way to get money. Michael Lett is presenting a restaging of Eve Armstrong’s Trading Table, which provides a site for audience members to trade goods and services (to be supplied immediately or at a later date) without any money changing hands.  But lets not overstate the risk of showing this work: there were also multiple multiples of highly saleable Michael Parekowhai maquettes elsewhere in the fair (because who can afford his full-size sculpture anymore?)

Starkwhite took a similar approach to Gow Langsford et cetera. They are showing, among other things, a very beautiful Fiona Pardington diptych, a Gordon Walters work and a bronze sculpture by Michael Zavros, Australia’s half-hearted and 20-something years too late answer to Jeff Koons. If they sell everything perhaps they can pay that tax debt they apparently left behind in liquidation. Do they still get Creative New Zealand grants after that?

Sensibly, given the commercial nature of the event, the AAF makes a strong effort to encourage people with money feel welcome and comfortable (although the Cloud is icy cold). There is an oyster bar and food and drink “curated” by Peter Gordon, Laurent Perrier poured at the opening and a big display of Lexus cars parked out front. Young professionals in particular were invited to something called an “Artists Party” on Friday night, with music provided by George FM DJs (but thankfully not Thane Kirby). But there did not seem to be many artists there. And it finished at 9pm – so not a very good party either.

There were a few of local celebrities in attendance at the opening. Kerre McIvor, Colin Mathura-Jeffree and so on. I am not sure whether they are here for the opening or the art. Not that attending an opening just for the free drinks would be unusual. Its just that you don’t really see them at any other art event. Or perhaps they are just Gow Langsford clients?

One way in which the AAF is not like a trade fair: the AAF, like other art fairs, borrows conventions from traditional art institutions. There are various artists scheduled to talk about their work, in their dealers’ booths in front of their work, and panel discussions with some visiting curators. There are also a number of works exhibited outside of the various booths. These were part of a project called “Pacific Real Time” and were selected by a couple of curators (this is where the Michael Parekowhai maquettes come in). These were usually presented in various interstitial spaces and by the toilets. Some of the work was interesting, but as a “project” it was not convincing.

Terror Management aka Halloween have a booth, filling the role of the on-trend artists-run space included in the fair to provide a younger, riskier flavour. So a similar function to the Gloria Knight gallery last time. But Terror Management don’t fit in so well (more punk and less private school art-bro) and are more interesting.

There are a few international galleries present, mostly from Australia, but also one from Santiago and one from Rarotonga. This is impressive, because New Zealand is a relatively small market. Their presence might suggest then that collectors from these countries are coming here for the AAF, which is a testament to the work put in by the organizers.

Notable absences from the AAF are Ivan Anthony from Auckland and Robert Heald from Wellington. Ivan Anthony Gallery does feel like a members-only gentlemen’s club (not in the sense of a brothel, more in the sense of the Northern Club) so its absence at a public event like this would be consistent. Robert Heald has been at the AAF before, so his no-show is a little odd.

The confusion and bad taste that art fairs like the AAF can leave you with is in a sense encapsulated by the fact that a significant sponsor of this year’s AAF is My Art, a business that will provide you with an interest free loan to buy artwork. My Art is operated by a finance company that also operates at least partly as a “fringe lender” (basically lending money to poor people at high interest rates, arguably making sure these people stay poor). Is it OK that in this case they are lending money to people who are more likely to be able to pay it back? If you question the ethics of fringe lending, does borrowing money from My Art implicate the borrower in these other business practices? How about selling work to a person who has borrowed money from My Art? Can you be sure that the other money at the AAF comes from sources that are beyond reproach?

The AAF can be confronting in that it allows a visitor with a glimpse of the hardcore commercial activity that supports much of the art world. Despite the hospitality, it can be deeply uncomfortable.