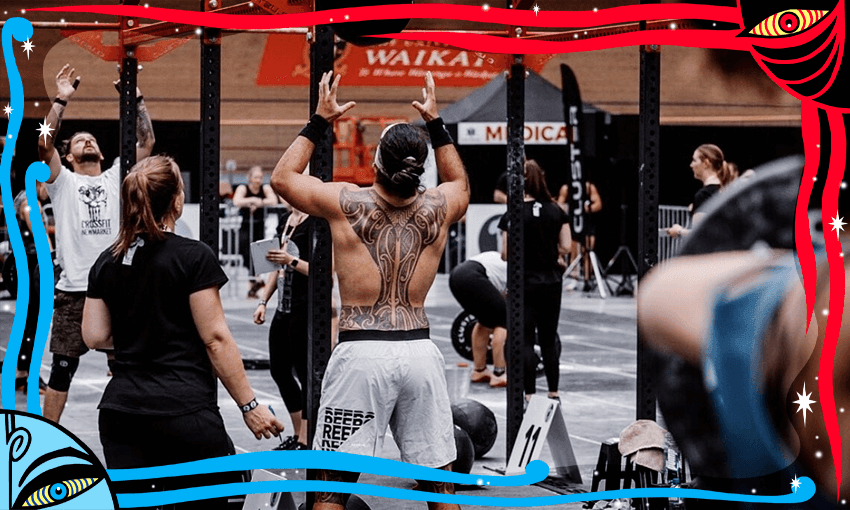 Developed by the Kapa-Kīngi triplets, the first-ever Māori language crossfit-style functional fitness competition is taking place this month, with the aim of elevating Māori health and language simultaneously.

Three Māori men in their mid-20s, the Kapa-Kīngi triplets, are combining their passions for lifting Māori health and championing te reo with a fail-proof formula that Māori love – competition.

“Mātātoa is a representation of two things that my brothers and I are passionate about, te reo and fitness,” says Eru Kapa-Kīngi.

Competition is another crucial ingredient. “That’s the whanaungatanga element,” he says. “Kei roto i a tātou te wairua whakataetae, we thrive off competition. I runga i te wairua pai, we all love a bit of that. That’s why so many Māori do kapa haka, to add that competitive element,” says Kapa-Kīngi.

For Eru Kapa-Kīngi, crossfit and functional movement is a natural area for Māori who are looking to improve their health and fitness in a team environment.

“Most people who do kapa haka will do some sort of functional training, so they’ll have one foot in that realm, and another foot in te ao Māori and te reo Māori,” says Kapa-Kīngi.

The triplets are long-time gym goers and former footy players who made the shift into crossfit in the past few years. The gains for Eru Kapa-Kīngi are numerous.

“You don’t get concussion like you do when playing footy, te mea te mea, it’s a nice outlet for training and it probably aligns more to how our tūpuna would have trained – functional stuff, running, climbing hills, training the physical and mental resilience,” he says.

One of the workouts for Mātātoa is named “upoko pakaru”, which is tied to the Māori proverb “kaua mā te waewae tutuki, engari mā te upoko pakaru”. It encourages us not to give up when we’re facing adversity, but to push through.

For Kapa-Kīngi, his whakapapa Māori and kōrero tuku iho is how he channels his inner strength.

“When you’re right in that dark place, i roto i te pōuri, I think about my tupuna Te Houtaewa. He was renowned for his athletic ability, he ran up and down Te Oneroa a Tohe and he was known for that. If I’m out running, I’m thinking about embodying my tupuna,” he says.

Kapa-Kīngi is a strong believer in physical fitness being an integral part of our overall health.

“We want to see more Māori for the health benefits so we can alleviate some of the negative stats around hauora within our iwi.

“Māori are a pretty talented bunch, so for a lot of Māori who couldn’t crack it in footy, if you still like training and fitness, bro, crossfit is a mean way to do it,” he says.

Functional fitness is huge. The foundation of functional movements is a popular way for athletes across multiple codes to train, although the emergence of crossfit has seen a new global industry stand on its own feet.

The introduction of te reo into those spaces is a natural progression and embodies how far efforts to normalise and revitalise te reo have come in 50 years.

Mātātoa has been supported by Te Mātāwai, an independent entity set up under Te Ture mō Te Reo Māori (the Māori Language Act) to promote the use of te reo in the community, with the idea being to enable rangatahi to create a future where our culture is normalised in all spaces.

“You don’t have to be a mātanga reo, or a top athlete either. All our wero are reorua, all our comms are reorua. At the moment the language being used is at the introductory phase,” says Kapa-Kīngi.

The exercises in the competition are being released on Instagram in a series of “wero” videos, with all the movements having kaupapa Māori behind them.

“One workout has rope climbs – that relates to Tāwhaki who ascended to the heavens. Another workout focuses on leg strength, related to Tāne who separated his parents Ranginui and Papatūānuku,” says Kapa-Kīngi.

The range of movements centres around gymnastics-based fitness, strength and cardio.

“My brothers and I have put together a glossary of all the movements and equipment in crossfit, and translated them to promote the usability of te reo even in that space, even if they are jargon terms,” says Kapa-Kīngi.

Burpee has been translated to “papa peke”, and pull-up is “tō runga”, while a squat is “tūruru”.

The brothers hope that through the competition, the kupu will be normalised in the fitness community.

“It’s a Pākehā-dominant scene, but this is just one part of our world and as the saying goes, ‘whakamāoritia tō ao, tukua te reo ki ngā wāhi katoa’ – ‘render your world as a Māori one, project te reo Māori into all areas’. And this is one of those areas, your crossfit gym,” says Kapa-Kīngi.

As the competition progresses, the goal for the Kapa-Kīngi brothers is that te reo Māori and te reo fitness will grow alongside each other.

Ngā piki me ngā heke – the ups and downs

It hasn’t all been easy reps, with the pandemic putting all physical events in the last few years in jeopardy. Mātātoa was no exception, with the original competition date having to be postponed.

“It’s a kaupapa about hauora, so who would run a kaupapa that would effectively put the health of the attendees at risk? So that was a consideration for us, to determine the safest time for the event to take place,” says Kapa-Kīngi.

The changes had an impact on the supply chain for equipment, but the trio are grateful for the support of a number of local gyms who are practising manaakitanga and supporting the kaupapa by lending gear to help the movement get up and running.

Filling a gap in the market

If demand is anything to go by, Mātātoa will be breaking out into a sprint in years to come.

“The response we had was massive, it’s the first one of its kind and there has been a huge uptake,” says Kapa-Kīngi.

Participants will be travelling from all over the country to Tāmaki Makaurau later this month to test their fitness while engaging with and uplifting our native language.

On the day registrations opened up, all three divisions sold out in under two hours. An event for those over the age of 18, there are 70 teams in total and 30 teams on the waitlist, with a cap of 140 athletes this year.

For this first competition, athletes will compete in teams of two, male and female.

As the competition grows, the brothers will open it up to more teams and a masters division.

“The goal is to keep rolling and have this as a crossfit equivalent of IronMāori. That’s how that kaupapa started out – some Māori got together, chucked a kaupapa together, now it’s huge,” says Kapa-Kīngi.

The new date has been set for June 18 at CrossFit Waitākere in Tāmaki Makaurau, right in time for Matariki, when we will see who is crowned the nation’s Mātātoa.