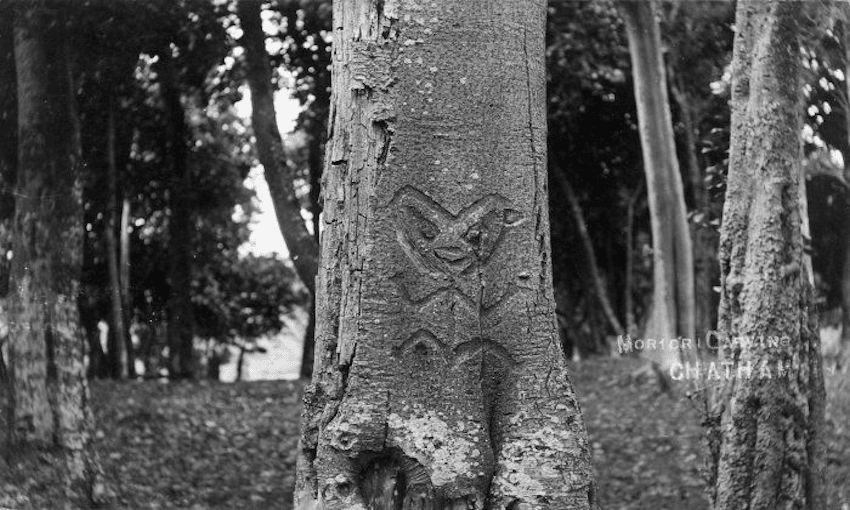 Tree carving on the Chatham Islands, ca 1900 by an unknown photographer.

The Moriori myth and why it’s still with us

Tree carving on the Chatham Islands, ca 1900 by an unknown photographer.

The go-to argument for many people spouting anti-Māori sentiment often starts with ‘… but Māori killed all the Moriori’. Researcher Keri Mills is eager for fellow Pākehā to do some reading before reaching for this lazy argument.

Firstly, the myth. You’ve heard it before. There were a pre-Māori people in New Zealand, called the Moriori. When Māori arrived in the country they set about obliterating these peaceful Moriori inhabitants until not a single Moriori remained alive.

This story is completely wrong. But it is astonishingly pervasive. You might have heard it referred to recently by a former leader of the National Party on our national broadcaster. The interviewer, Kim Hill, responded by exclaiming “for heaven’s sake! If only Sir Michael King were here today” and drawing the interview to a close. I understand her exhaustion, but I wish she had taken the time to briefly explain her invocation of the late historian, because Don Brash is only one of many New Zealanders who are confused about this part of our past.

Let’s take it to bits.

Were there a pre-Māori people in New Zealand called the Moriori?

Were there a pre-Māori people, at all?

As far as the scientific evidence is concerned, there were no pre-Māori people. There is no substantial evidence of any sustained human presence in this land before the 13th century, and past then all the evidence is of a fairly homogenous group of people with Eastern Polynesian origins.

Did Māori kill the Moriori?

In 1835 a group of about 900 Taranaki Māori (from Ngāti Mutunga and Ngāti Tama) sailed from Wellington to the Chathams, with the intention to make it their new home. They had recently been driven out of their own rohe during the Musket Wars. Shortly after they arrived they killed around 300 Moriori and enslaved the rest. So yes, some Māori did kill some Moriori, and the story is an awful one – but to attribute this to all Māori is wrong, and if you find yourself wanting to do it you should question your motives in doing so.

Are there any Moriori left?

Yes. Moriori are a distinct and surviving kin group. Some still live in the Chathams, some live on mainland Aotearoa and overseas. Their genealogical heritage is now complex and intermingled, as with Māori and almost every other ethnic group on the planet.

So, on to another, and perhaps a bigger, question: why do so many people believe the Moriori were a pre-Māori people living in Aotearoa that were wiped out by Māori?

There are several answers to this question. The shortest one is that this story was taught as history in New Zealand schools for most of the 20th century.

But this doesn’t fully explain the story’s pervasiveness. Plenty of incorrect things have been taught to Kiwi schoolchildren in the past, but few have lingered as long in the popular imagination as the Moriori myth. Parts of the story were disproved as early as the 1920s, and the whole narrative was meticulously debunked in David Simmons’ The Great New Zealand Myth, first published in 1976.

The historian Kerry Howe has written about the misconceptions relating to first arrival in Aotearoa. His book The Quest for Origins shows how the Moriori myth arose in a period when Pākehā believed Māori were dying out. Howe argues that the Pākehā at that time had a desire to justify what they saw as the imminent extinction of Māori, and excuse themselves from blame for it. They did so using evolutionary arguments about some “races” being stronger than others. The story of the extinction of Moriori at the hands of Māori was another example of a “natural” process of a stronger race replacing a weaker one. It was a useful story for Pākehā, and so it stuck.

Today, with a thriving Māori culture all around us, the narrative has a different, though still qualitatively very similar use. It surfaces in the comments on news stories relating to Treaty settlements. It bubbles up in the stream of discontent about the increased use of Te Reo on the airwaves. It provides a convenient defence for Pākehā colonisation of New Zealand – or at least an argumentative strategy to silence Māori grievance about it. The strategy goes along the lines of: ‘Who are you to complain? You did it yourself.’

They didn’t, though. So as tempting as this myth seems to be to people like Don Brash, they should stop using it, and not only because Kim Hill will burn you. Just because it’s wrong. This is not an appeal against free speech. It is an appeal to use free speech that is true, instead of free speech that isn’t.

One last thing. Many Māori histories speak of a people before their arrival in Aotearoa, who were variously conquered, absorbed by marriage, or in some cases simply remained, and have descendents alive today.

I have no wish to trample on these traditions, but I do have a dear wish to deprive my fellow Pākehā of a racist narrative that has no Pākehā evidence behind it. If Pākehā want to use Māori traditions as evidence for their arguments, they can go and learn Te Reo me ōna tikanga in one of the many wonderful wānanga in this country, and find out the proper context of those histories first. The invitation is open to you, Dr. Brash.