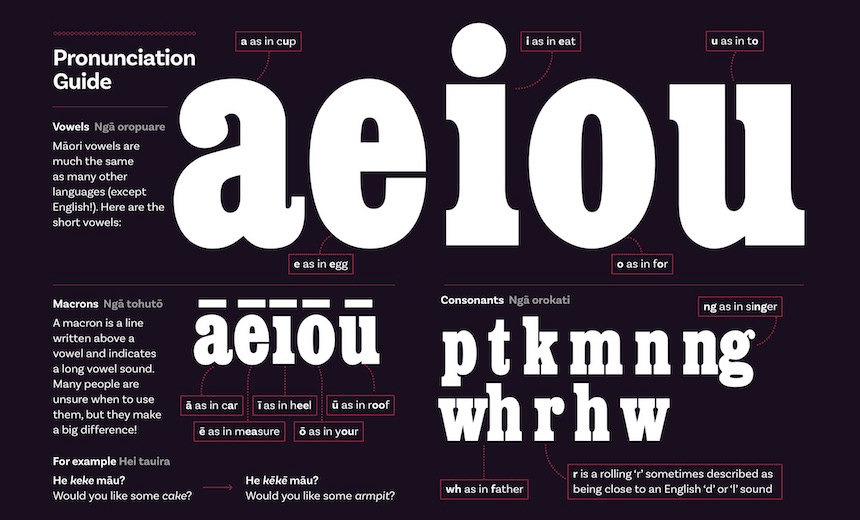 Summer reissue: Get your macron on: A guide to writing te reo Māori the right way

The tohutō (macron) is an important and powerful part of te reo Māori. Simon Day explains how to use it.

The macron matters. The use of the tohutō is essential for the pronunciation, meaning, and status of te reo Māori.

When you see a vowel with its hat on it means the sound is held longer. For example in Ātea, the name of the Spinoff’s Māori section (the word means, among other things, ‘public forum’), the “a” is pronounced as in the English word “car”. They’re also essential for the meaning of Māori words: kākā is the native parrot, kakā means glowing hot, and kaka is a stalk or lineage (and also a colloquial word for poo).

(Te Aka Māori-English is an invaluable online tool).

“When you take care to spell Māori words correctly and in a way that corresponds to the sound of te reo Māori it draws attention to the fact that the words are being treated as Māori words and that the language is valued,” says Lee Smith, kaitiaki reo kiTe Taura Whiri i te Reo Māori (The Māori Language Commission).

Doubling the vowel has been used by some as a hack to replace macrons but it can be confusing to read. Some te reo Māori words contain double vowels where two words have come together as one, which is different to a vowel with a macron. Whakaahua (photograph) and ātaahua (beautiful) are examples.

Some people and some media organisations still find it too difficult to put the hat where it belongs, when in fact it’s really easy.

So to help you get your macron on, The Spinoff, with the help of Kupu o te Rā, has provided a short guide on how you can add the tohutō to your keyboard.

On a fancy new Mac all you have to do is hold down the vowel which needs a macron and the full range of accents will be offered.

To set up your pre-2017 Mac to type tohutō, follow these steps:

And if you tick “show input menu” you’ll have the flag for the United Tribes of New Zealand on your menu bar. Tumeke!

The Māori keyboard driver is already installed on Windows. You just have to activate it as follows:

To add a macron, hold down the  ` key and type the vowel you need. Adding shift will put a tohutō on your capital vowel.

If you’ve followed the above instructions, you can already type macrons in Word. However, if you have Word, you may be able to install the Māori language interface pack or proofing tools.

Firstly, download the language accessory pack. If you’re fluent you can now run Word entirely in te reo Māori. But for those still learning installing te reo gives you access to a Māori spell check. To spell check a section of te reo Māori text you need to designate that text as Māori.

To mark text as Māori, select the text, go to Tools (for older versions of Word) or Review (newer versions), then Language, Set Language, select Māori and choose OK. If you usually type in Māori rather than English, you can click on the Default button before clicking OK.

It’s easy to get macrons on your smartphone, just hold your finger on the vowel and the macron will show up as one of the accent options.

A short history of the tohutō

The first recorded attempt to mark long vowels was also in the first known official government document written in te reo Māori. In a 1824 proclamation by the New South Wales Governor, British law was extended to “the islands of New Zealand” to try and provide some control of the unruly whalers and sailors roaming the south Pacific. ‘God save the King!’ is translated as ‘Má te atua e wāka óra te kingi’. The proclamation was later disallowed.

Linguist Bruce Biggs used doubled vowels in his English-Māori dictionary (1966) and some people continue to follow his approach.

One of the first decisions by Te Taura Whiri i te Reo Māori on its establishment in 1987 was to express a preference for macrons and their use as a standard dates from this time.

They use of double vowels is preferred by some, especially in the Tainui area. The advice of Te Taura Whiri is to use macrons for all words except where the double vowels form part of a personal, family, hapū or iwi name and the ‘owner’ has a preference for that spelling.

“Some older Māori are much more sparing in their use of macrons or do not use them at all. We respect individuals’ rights to these views and writing practices but all graduates of modern schools use macrons and it is the established and expected written form,” says Smith.