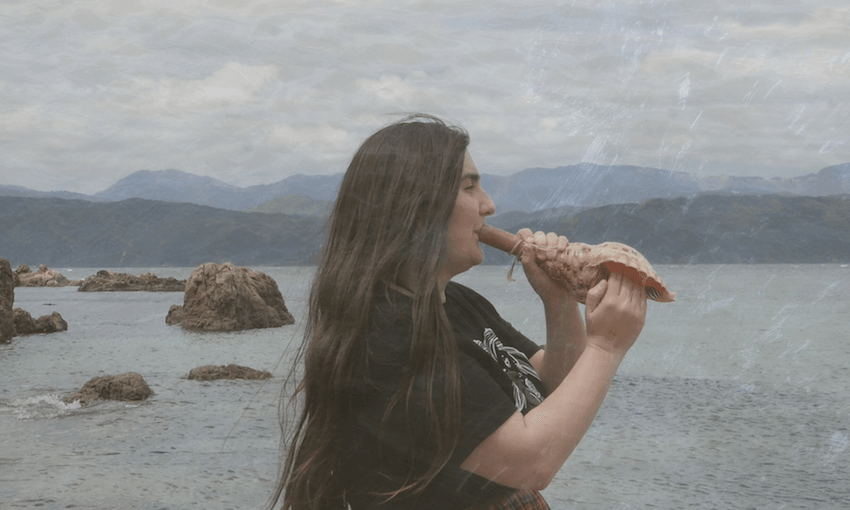 Ruby Solly is making music to the sounds of the stars

Ruby Solly has been composing music using the frequencies of the stars, but it’s the ways they resonate in the stories of our ancestors that creates the most heavenly music.

No, she’s not hearing things. Solly has been commissioned by the Wellington Jazz Festival to compose and perform a brand new work converting the frequencies emitted by stars into music.

Te Karanga o ngā Whētu will focus on stars that have significance within pūrākau Māori, and the stars and clusters that mark the new year. Solly says she’s been delighted to discover that all the stars she’s chosen have been linked in a way that she can tell an overarching story. “I’ve been conscious of centring Wellington – in my head it’s always been a mixing pot for many iwi at different times. Obviously we have our mana whenua of Taranaki Whānui, Te Āti Awa and Ngāti Toa, but historically it’s also the centre of the country and many have passed through. So I’ve tried to include storylines from many different iwi.”

Not every iwi celebrates the rising of Matariki as the new year. For some it’s the rising of Pūanga or the setting of Rēhua. Similarly, different iwi have different stories about the same stars. “There’s a constellation we have called Te Waka o Tama Rereti, and to some it’s Uruao, and to some it’s Te Waka o Aoraki,” she explains. “I’ve tried to weave them in so that everybody can feel their story within it, but still have a clear storyline going through. That was a real challenge but really important.”

One piece she’s very excited about is about Pōhutukawa, the star in the Matariki cluster that connects us to the dead. In Rangi Mātāmua’s book Matariki: The star of the year, he says people would “cry out the names of the dead and weep when Matariki was seen rising in the early morning”.

Solly says there’s also a kōrero from Teone Tikao, an ancestor of her peer, musician Ariana Tikao, about the dead sitting on a rock at the end of the world by an ancient Pōhutukawa tree. “They would be cutting off all their hair, and crying out all their last tears and hūpē before they jump into the pool of souls. And I just thought that image was so stunning, just thinking about how important our hair is to us as Māori too. I think the wording was “they cut off each other’s hair”, and that act of having to help somebody else when you too are almost helpless, I just thought that was really beautiful.”

She says that became the starting point for Te Karanga o ngā Whētu: “We kind of follow that journey of when someone passes away and climbs up to the highest point, and looks back across their lands before travelling up north [to Rerenga Wairua].”

Of course, the big question for her audience is: what does a star actually sound like? She giggles. “Oh my gosh, there so many ways to answer that question. In the Pākehā science, they send up a note and when it hits a star it sends a note back down. Kind of like if you throw a bouncy ball really hard up at the roof – it comes down with the same intensity as how hard you threw it.

“The recordings I’ve heard vary; a lot of low sounds and a lot of high sounds, this really spread out sound.”

She refers to the creation stories of Te Kore and Te Pō, the time of nothingness, a void filled potential, and the long night that followed, from the which te Ao Marama, the world of light emerged.

“If I think about Te Kore ki Te Pō, that’s what that sounds like. The really low and the really high leaves that space of potential in between, for improvisation. So there are a lot of sections like that, but they are based on the actual notes that come back.”

She tells me the star Rehua is a C. “Well, that was the closest we could get. With taonga pūoro we can kind of play C and a quarter, or C and an eighth, which is perfect. It wouldn’t actually work, playing this note, with anything except taonga pūoro, which is really cool and shows the perfect synergy of our [Māori] sciences, of our understanding of the natural world.”

Solly is relieved to have been given the time and resources to properly research and compose, working with Tāwhiri’s Mere Boynton. “It feels like nothing is done as a tokenistic gesture. It felt like I got to build a really beautiful process because I had that financial freedom and support.”

In March last year she penned a piece for e-Tangata titled ‘Being Māori in classical music is exhausting’, about the exclusion and racism she had experienced from a young age as a classically trained cellist.

She wrote: “Last year, in one week of shows within the classical community, where I now work as a taonga puoro player, I had somebody ask me if I wished that my ancestors had found a few more notes for me to play with; three people referred to my pukaea as a didgeridoo; and one high-profile Pākehā musician with a New Zealand Order of Merit questioned my blood quantum and my right to play these instruments — even though he’d had no problem playing with Pākehā taonga puoro practitioners in the past and, as far as I know, had never questioned their right to do so.”

She says nowadays it’s become the norm for her to make her boundaries known at the outset of any project. “I wouldn’t go into a space I knew was gonna potentially be bad on my own. I will try and make it a more open space, and say no, if you’re going to have me then you’re going to have these Māori as well and you’re going to manaaki us and we’re gonna manaaki you. That’s how it’s going to work or we’re not coming.”

Karanga o ngā whetu is no exception – she’ll be performing with her group Tararua, including taonga pūoro practitioners Alistair Fraser and Ariana Tikao, and she’s bringing friends. Lots of them.

“At the end of the concert we’ve got some people who are going to play taonga pūoro from the audience. Two of our wives are in there, a lot of our friends in the community, so it’s this moment where we get to play together and they get to feedback to a performance, which I think is really important.”