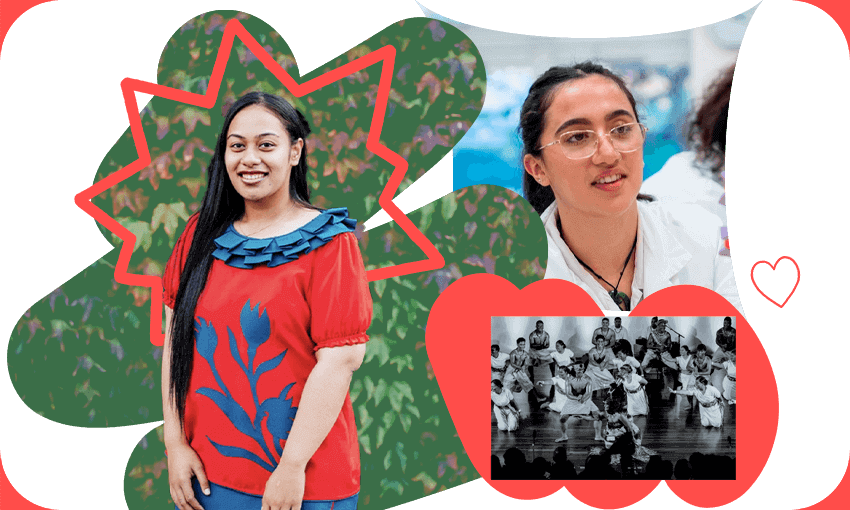 Thousands of students make the move down to Dunedin each year for university, and for some, that shift means moving away from whānau. That’s why the university’s Māori and Pacific centres are creating a safe space for their students to thrive.

The youngest of six, with parents who wanted to keep her close, Taukolo says the move to Dunedin for university seemed like a shift to a different world. Her close-knit family are in South Auckland, where she’d grown up, and she’d wanted to remain near them after high school.

“Honestly, I was never supposed to go to Otago. But it was the only place that offered me a scholarship,” Taukolo explains.

That initial entrance scholarship, set up specifically for first-year Māori and Pacific students, was the first step in what’s become nearly five years of Dunedin study for Taukolo.

She’s in the final semester of her Bachelor of Laws and Bachelor of Arts, majoring in Pacific studies. She’s also in the midst of completing her Profs course, the final stage before admission to the bar to practise as a solicitor.

The 22-year-old, who is of Tongan descent, is also the new president of the University of Otago Pacific Island Students Association, a role which will take her into the start of her postgraduate studies next year when she begins a Master of Laws.

This year she’s one of about 1,300 Pasifika students at the University of Otago. Amidst a 20,000-strong student population, and against the backdrop of a city traditionally less diverse than other parts of the motu, being Pacific at Otago can be confronting at first, she says.

“Even just walking down Castle St, [you’re] trying to spot a brown person, because there were just so few of us. And then when you see one, you kind of just grin and they grin back at you because they’re pretty much doing the same thing.”

When she arrived as a first-year student in 2017 her sister Lucy flew down with her. Neither had been south of the Cook Strait before. Another big help to Taukolo settling in during that first week: the official welcome for first-year students at the Pacific Islands Centre on campus.

That early connection proved to be one of the more important experiences of her university years. She was able to meet other first-year Pacific students, as well as the more senior ones and the centre’s ever-present staff, who are in charge of coordinating a range of academic and non-academic activities for students.

“It was just really good knowing right at the start there were other [Pasifika students] and the centre was there, and that there were heaps of services available.”

It’s also a connection that’s developed over the years. Now, Taukolo is one of the more senior students at the centre and she helps ensure those coming through also feel at home there. It’s important for both getting access to services and having a support network, that home away from home, Taukolo says.

Tagiilima Feleti, who took over as manager of the Pacific Islands Centre in March, says that connection with students has become particularly critical during the disruptions and uncertainty of Covid-19. Travel restrictions both in New Zealand and overseas have meant prolonged periods away from home for some students.

“For those who have stayed here, things like making sure they have kai, and warmth and everything they need in that sense” has been a major focus of the centre’s mahi, Feleti says.

“Overall, our role here at the centre is about providing that pastoral, holistic, academic support for our students at whatever stage of their academic pathway.”

Michelle Taiaroa-McDonald (Ngai Tahu, Kati Mamoe and Waitaha) is tumuaki of Te Huka Mātauraka, the Māori Centre. Like Feleti, she started her role at the beginning of the academic year.

“We’re in the same waka,” Taiaroa-McDonald says of her counterpart at the Pacific Islands Centre.

Both have similar desires for the students their roles are set up to support: that they succeed in their academic careers and are connected with the services and support they need to do just that. The pair also meet once a week to discuss how things are going, and how their journeys to “reinvigorate and renew” their respective centres are progressing.

They’re also looking forward to the imminent relocation of the Pacific Islands Centre to Castle St North. When that happens, it’ll mean both centres, along with the Office of Pacific Development and Office of Māori Development, will be in one place on-campus.

“We plan to really capitalise on that vibrancy and visibility and being able to use our meeting spaces together [to] extend the whānau feel of both teams,” Taiaroa-McDonald says.

Being across the road from each other will also mean more opportunities to collaborate. In August, the centres worked together with the Māori and Pacific student associations to support a mass student vaccination event at Forsyth Barr Stadium. Joint events for next year’s O-week are also being planned.

“We’re always under the spotlight being Māori and being Pacific, and we just want to make sure that’s a positive light that we’re getting on different kaupapa that we might be behind.”

This year, about 2,000 enrolled students at Otago identified as Māori. Of those, about 600 have connected with Te Huka Mātauraka. Taiaroa-McDonald says the numbers reflect two things.

First, that the bulk of support and services at Te Huka Mātauraka – as at the Pacific Islands Centre – are focused on first-year students. This is because the transition between high school and university has clearly been identified as a significant challenge for students.

“Coming from a high school, in terms of environment shift, you’ve got very supportive teachers, you’ve got your whānau. Then you get here and you’re being taught by an international [lecturer]. That will come as a bit of a shock too,” says Taiaroa-McDonald. “Even just the shift from a classroom of about 30 to an auditorium of 500.”

Second, she says, the gap between the number of enrolled Māori students and those connected to the centre reflects the large number of students who aren’t confident to “come through the doors”. Both leaders want to close that gap.

“Those are the tauira we really need to connect with,” Taiaroa-McDonald says.

Part of the solution will be finding ways to connect with Māori and Pasifika students earlier, during their final high school years. But it’s also about finding ways to reach out beyond those who bring themselves to the centre, Taiaroa-McDonald says.

“It’s pastoral care, Māori-styles. Because there’s so much support available for our tauira, and if one Māori student doesn’t succeed, it means we haven’t connected them with what they need – which just shouldn’t ever happen.”

One familiar face at Te Huka Mātauraka over the past three years is Gemella Reynolds-Hatem. The 21-year-old is in her final year of a Bachelor of Arts and Science, majoring in genetics and indigenous development. She grew up in South Auckland and says she picked Otago both for its world-class genetics department and the opportunity to be closer to her extended family.

“I’m Ngāi Tahu and my marae and a lot of my family are based in Moeraki [about 50 minutes north of Dunedin]. I wanted to be closer to them, my tūrangawaewae, and my grandmother is also in Christchurch.”

For Reynolds-Hatem, the Māori Centre has provided invaluable support, friendship and whānau. Throughout her studies, she’s made the most of tutorials held for her genetics papers – which otherwise would only be available through private paid sessions. She’s also become friends with all her mentors over the years, and is involved in supporting first-year students coming through.

“From day one at the pōwhiri it was like the aunties coming to get their nephews and nieces at the marae,” Reynolds-Hatem says.

“That was the vibe I got, that it’s like a whānau thing rather than a university thing. And that’s what it’s been like ever since.”