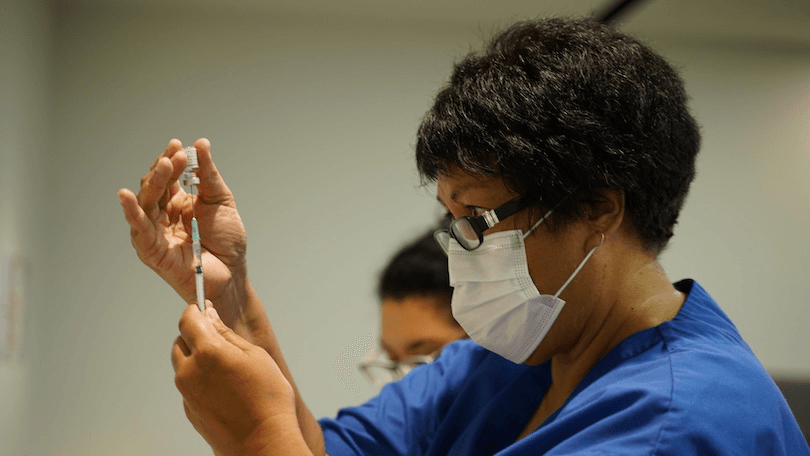 A vaccine being administered in South Auckland. (Photo: Supplied)
Opinion

A new study that paints in stark detail the increased risk of severe disease for Māori and Pasifika who contract Covid doubles as a damning indictment of our health system, writes medical expert Rawiri Jansen.

Once again Māori and Pacific people are at a higher risk of more severe disease. But this is not the most uncomfortable truth so let’s go a little deeper.

These authors have been behind some of the really important science that has informed the pandemic response in Aotearoa. They are the crew who gave us modelling in the early stages when Covid-19 emerged as a global health threat back in February and March 2020. New Zealand closed its borders, and implemented the alert level system. We learned about social distancing and household bubbles.

Te Pūnaha Matatini, the centre of research excellence for complex systems, and a funder of this study, has produced a series of influential papers since then modelling different scenarios for Covid-19 in New Zealand. Those papers have informed the pandemic response in ways such as whether we should aim for suppression or elimination, whether elimination was in fact possible, and how long we should remain at an alert level. This team has also looked at the data from the outbreaks. The outbreaks are of course really two quite different and separate events, the first being characterised mostly by association with international travel and returning New Zealanders. The second outbreak was in Auckland in August 2020 and the border incursion was never formally identified.

This paper quickly summarises that history. It then dives quite deeply into the complex mathematical and statistical details of logistic regression models. Imagine statisticians and data analysts testing and contesting those details rigorously; which regression models are best suited to these data and so on.

The findings that emerge from these scientists are really disquieting. Yes, Māori and Pacific are much more likely to be severely impacted by Covid-19 disease (that is the hospitalisation part of the study). But the scientists actually tell us why, and they also provide a stark visualisation of that impact.

They state: “Structural inequities and systemic racism in the healthcare system mean that Māori and Pacific communities face a much greater health burden from Covid-19”. Yes, right there. They used the r-word. This increased risk is not because Māori or Pasifika are more genetically prone to Covid-19. No, this is due to structural issues like housing quality, overcrowding, access to healthcare, and systemic racism – a health system that delivers higher rates of underlying long term conditions often undiagnosed, lower life expectancy, higher rates of multi-morbidity and less treatment. Cumulative disadvantage.

And then these authors make it very plain, so clear that you can picture this: a 49 year-old Māori man (with no co-morbidities) has the same risk of hospitalisation as a 70 year-old Pākehā man (with no comorbidities). That is a 21 year difference. And for a Pasifika man that would be 25 years’ difference. This is alarming. This uncovers a very uncomfortable truth that previously we might have discussed by referring to the life expectancy differential – seven years for Māori men.

Shocking. But not new. Then-minister of health Pete Hodgson said as much back in 2008: “Māori spend a relatively greater proportion of their shorter lives disabled.”

Perhaps it is confronting to explicitly see the size of this inequity. Twenty-one years! And of course this is the real kicker – this should reasonably and rationally affect the vaccination rollout. Pākehā as an age cohort should be getting the vaccine after Māori – specifically, 21 years later: Māori at 44, Pākehā at 65; Māori at 49, Pākehā at 70 and so on.

That isn’t what we see, and it isn’t what the Ministry of Health has planned. But it is what the evidence suggests. Be guided by the science.