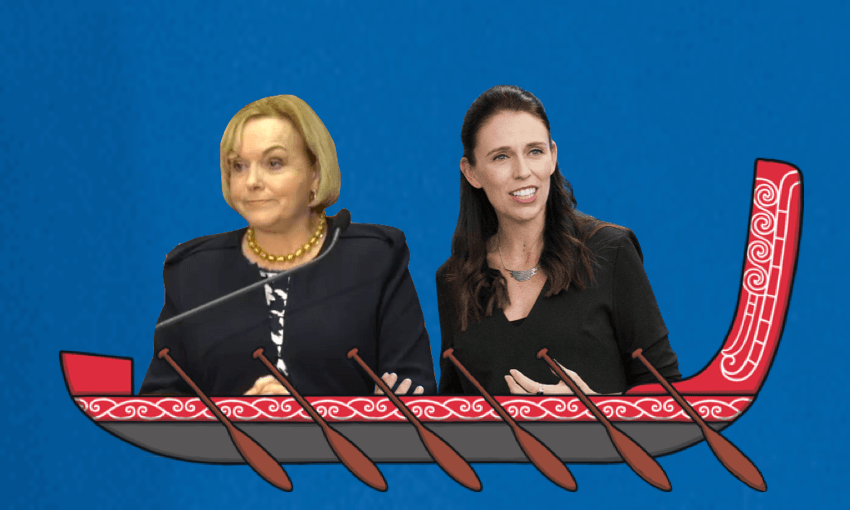 Māori don’t exist, according to our political leaders so… talofa

Jacinda Ardern and Judith Collins showed their true colours in the first leaders’ debate, and they were pretty pale.

Last night I settled in on the couch with a beer and takeaways, and watched an engaging, rambunctious and focused political debate. It was entertaining but also challenging and informative, and covered the critical issues facing Aotearoa and te ao Māori in 2020.

Meanwhile, over on TVNZ, you’d be forgiven for thinking Jacinda Ardern, Judith Collins and John Campbell’s ancestors sailed to these shores and settled on pristine, empty lands.

All three spent the entire debate in a blissful, alternate, Māori-free universe.

Māori are Aotearoa; it is us. We are the land and the people. Our language is this country’s language, our culture and traditions belong to this country.

It moves me to stress these things because an hour-long discussion about the future of our country took place without any recognition we exist, and it was absolutely heartbreaking.

Māori rights and interests, Māori leadership, matauranga Māori and Māori contribution were all absent from a range of issues in the first leaders’ debate; issues where Māori are uniquely challenged, and qualified, in this country. Campbell questioned them on state housing, child poverty, minimum wage, the climate crisis and polluted rivers, and Covid-19, and no one once referenced indigenous solutions or the disproportionate effects on Māori. Absent too was any reference to Te Tiriti o Waitangi, the country’s founding document.

It’s a continuation of the erasure we’ve seen many times over during the Covid-19 crisis. The frustration felt by many Māori towards Ardern is her inability to recognise Māori leadership, at a time when Māori have proved over and over again that we excel in a crisis because of clear tikanga that guides decisive action. Our reo is used to name reports, strategies and government agencies but our inclusion at the decision-making table is always an afterthought; a right that has to be fought for by community leaders whose precious time and intellect should be spent leading and strategising, not begging for the privilege to do so.

Iwi and urban agencies have made it clear that on issues such as the Covid response, child welfare and education, Māori aren’t asking to be “included”. We’re asking to be handed the tools and for the Crown to gtfo. It’s infuriating to hear constantly about how progressive and kind our prime minister is, while she excludes us and panders to Pākehā, middle-class interests (see: our two-tiered welfare system, untaxed capital gains) and NZ First.

Not for the first time, I wondered if Labour’s Māori caucus were embarrassed. I imagine some of them will be fielding questions today from whānau, friends and constituents about why the prime minister failed to recognise tangata whenua again.

Collins’ track record is slightly better by virtue of not having been in power before, and, in fact, National’s record in cooperating with Māori leaders is arguably better than Labour’s thanks to Chris Finlayson and the previous government’s Māori Party coalition. Collins’ attempt to score cultural points with “My husband is Samoan, so… talofa” to Aorere college head girl Fili Fepulea’i-Tapua’i was embarrassing for everyone, though. A point on the board over which she couldn’t contain her delight, while her connection to the islands somehow didn’t move her to include a Pacific perspective in any commentary about the climate crisis.

It really illustrates that neither leader has our interests truly at heart beyond point scoring and tokenism, and don’t see the Te Tiriti partnership as significant until it’s politically expedient to do so. Māori will probably be an “issue” they discuss for a minute or two in the next debate, and perhaps the right things will be said and promises will be made.

But because of what wasn’t said in this first debate, I have a much clearer idea of where transformational change lies for Māori going into the election, and it’s not on either of their waka.