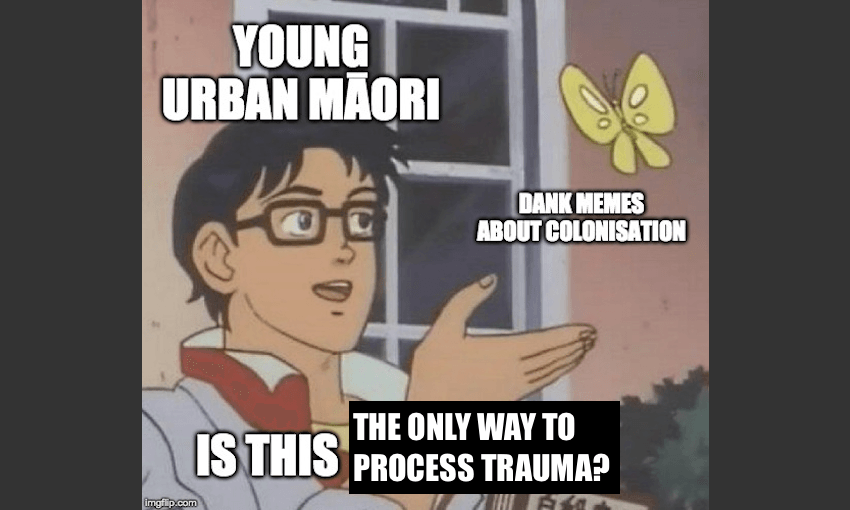 By any memes necessary: How Māori meme pages are helping to decolonise Aotearoa

A surge of Māori internet memes have appeared on Instagram in the past year tackling topics from land theft to a shared love of fry bread.

They’ve been around since the dawn of the internet, but in the last few years memes have become intrinsic to popular culture. They’ve also become increasingly political. Indigenous groups worldwide have been quick to utilise memes to communicate their messages. In the last year, Māori based meme accounts have taken off on Instagram. A constant flow of Māori memes are now being created and shared, and none of it is showing any sign of slowing down.

One of these Instagram accounts is @ngati_half_caste. As the name suggests, she’s Māori and Pākehā. A 20 year old university student, @ngati_half_caste set up the page last August after being inspired by coverage of the occupation at Ihumātao. The memes that she creates comment on social issues and lived experiences of Māori.

Meme pages representing indigenous groups worldwide are popular and predate most local Māori pages. Popular pages such as First Nations centred, @decolonial.meme.queens, have acted as inspiration for Māori meme makers like @ngati_half_caste. Although she can’t relate to all of the overseas indigenous pages because of cultural particularities, she says “it’s cool to see other cultures fighting through memes.”

For @ngati_half_caste, memes have also made clear just how similar indigenous resistance and struggles are. “It’s amazing to see just how closely related our history is in terms of colonisation and the way that we’re treated now.”

The last year has seen the convergence of high-profile indigenous protests worldwide. The Trans Mountain Pipeline, Coastal Gaslink Pipeline, Mauna Kea, Australia Day and locally, Ihumātao. Dr. Suzanne Woodward, who has a background in media and film studies as well as politics and international relations, says the tumultuous nature of global politics more recently could be a big reason for the rise of these memes. “Part of it is around having a safe space for protest, you have that affirmation of the group that you belong to, reaffirming that but also critiquing power structures in a way that’s hard to shut down.”

It’s hard to ignore the vital role that humour plays in all of these memes. @ngati_half_caste believes that this is crucial. “The history that we’ve had… there’s great heartache around it so I do think it’s important to be able to use humour.”

Unfortunately, not everyone’s been laughing. A Pākehā Instagram user has accused her of being ‘racist’ in reaction to one of her posts. She’s also had people report posts, which led to one being removed by the site.

“It’s a constant battle for Māori,” she says. She believes that memes play an important role in this struggle. “Something as simple as a meme calling out a racist council member has got a lot of power.”

Another Māori meme account, @spacific_memes, was set up in October last year. She decided to create her meme page when she realised her entire Instagram feed was slowly being filled up with indigenous memes made by other people. So she decided to give it a go herself.

Like @ngati_half_caste, the occupation at Ihumātao encouraged her voyage into meme-making. Though she had always considered herself political, the protest movement made her feel more comfortable about voicing these opinions. “It was such a watershed moment.”

@spacific_memes grew up in mostly urban environments with little Māori community around her. Meme making has allowed her to reconnect with her Māoritanga. Realising that so many other people share her views has given her a sense of political community. “It’s a good way of feeling seen and supported.”

You’ll see memes on these accounts and others which talk about the aforementioned fry bread or having your ‘nice’ jandals stolen from outside the wharenui, as well as various other everyday experiences that come with being Māori . They’re political too, says postgraduate student in Māori film, Briar Meads. When it comes to Māori identity and politics, Instagram meme pages are “making the connection that they’re politically intertwined” because, just being in te ao Māori is political.

Meads has noticed a flood of new Māori meme pages, as well as pre-existing pages posting more regular content. She’s optimistic about the decolonial potential of these memes. She compares these memes to early 2000s television show, bro’Town. Like bro’Town these memes use comedy to undercut racism and to talk about deeper political issues. “Underneath each one of those memes is a raw sense of mamae.”

It’s rare for Māori to have access to the type of mainstream platform that bro’Town had on TV3 in a primetime slot. So social media sites like Facebook, Youtube and Instagram have become integral to Māori community and organisation, Meads says. These alternatives to traditional media are important because they’re a cheap, accessible and fast way to communicate. Iwi, marae, hapu and whanau all incorporate social media use into matauranga – Māori ways of being. Similarly, social media was vital for the immediate response to the eviction notice served to occupiers at Ihumatao on July 23 last year and remains as we continue to wait for a resolution.

Dr Tiopira McDowell, lecturer of Māori studies at the University of Auckland, sees clear links between these memes and the historical adoption of technologies by Māori after colonisation. Think the adoption of muskets and invention of trench warfare by Ngāti Hine. And perhaps even more closely related, the early adoption of media technology by Waikato-Tainui. In 1861, Waikato-Tainui set up the first fully Māori newspaper, Te Hookioi o Niu Tireni. It was written and produced by Māori and even printed using their own printing press. The paper was used to counter government-operated newspapers attacking the Kiingitanga movement by providing a voice for the Kiingitanga and for Māori. It was essentially a “war of words” McDowell says.

McDowell thinks that like Te Hookioi these memes are entirely political and by making use of them, they help to make sure that Māori realities continue to be broadcast and shared. Since the arrival of Pākehā, Māori have been quick to adapt to new technologies for decolonial ends. These memes are just another example of this ongoing adaptation by Māori. Whether it be, Renae Maihi taking on Bob Jones, SOUL’s occupation at Ihumaatao, Taika Waititi’s speech at the Oscars, or Ngati Wai protesting for the protection of Great Barrier Island, “we are our ancestors”.