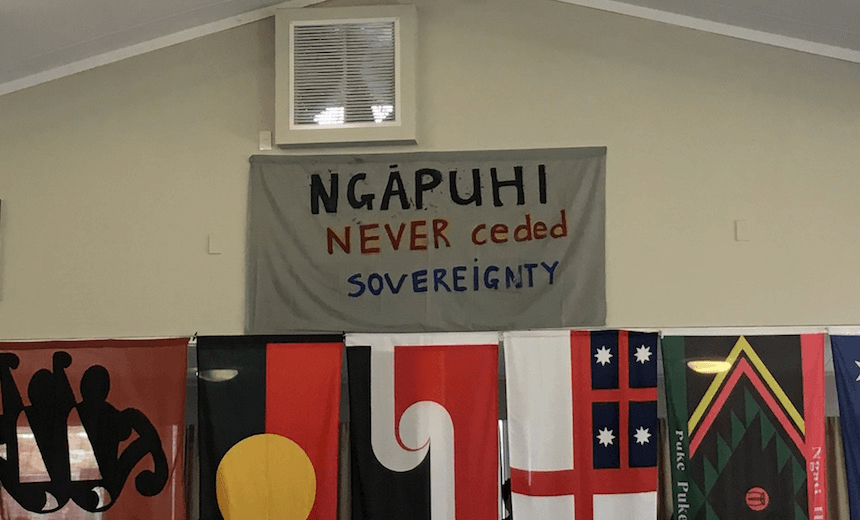 Why the Declaration of Independence still matters

As well as being the official NZ Wars commemoration date, October 28 is celebrated by Northland iwi for the signing of the Declaration of Independence, a document that recognised Māori sovereignty, explains Miriama Aoake.

In 1835, 34 rangatira signed He Whakaputanga o te Rangatiratanga o Nu Tīreni, the Declaration of Independence of the United Tribes of New Zealand. By July 1839, 52 rangatira had signed. The significance of this date has not diminished for Māori in 182 years, and continues to be celebrated as an affirmation of tino rangatiratanga. There is little to no room for language discrepancies to exploit in He Whakaputanga. Te Tīriti makes an explicit reference to it.

Earlier this year I was invited to sit alongside Don Brash on a panel in the role of ‘hater’. I lived to regret it, mostly because my personal experience being Māori clouds my ability to articulate my thoughts in a concise and eloquent matter when confronted with the bigotry of a white male dinosaur. I suggested that the government should consider dropping New Zealand history from the curriculum. If you have been privy to the syllabus offered by NCEA and its promulgation of mediocrity, you understand. New Zealand history is optional and at the discretion of the instructor for the course. It is not available as a topic until year 13. My teacher chose English history on our behalf. I chose to risk university entrance and dropped out of all her classes.

It is important to understand that even when New Zealand history is taught, the bias is inherent, from the sources used to the instructor’s approach. Historians themselves have been filtered through a Western paradigm of education, which disregards the oral traditions that seek to explain history from a Māori world view. Many historians are not versed in te reo Māori, which limits their perspective and defines their bias. This has allowed for the circulation of one perspective, one agenda. It conditions society to accept that perspective without challenge. It is our collective responsibility to deconstruct that view and promote the Māori world view if we aspire to be an informed society.

First, it is necessary to dismantle myths the Crown disseminated about Māori in early 19th century Aotearoa. Under no circumstances were Māori in dire need of a colonial saviour. The Māori economy was thriving and fiscal growth was sustainable. Collective title of ancestral lands, extensive local knowledge of agriculture and trade to Port Jackson in Sydney and Port Phillip in Melbourne became the foundation for a healthy economy. Māori had established wānanga which, though only attended by a select few, carried centuries of esoteric teachings and preserved mātauranga Māori. Pākehā settlers in several arenas could not compete with Māori communal enterprise and technological savvy. Tikanga was the rule of law and transgressions were met with tough punishment. The outward expression of tino rangatiratanga was evident.

The Crown’s acknowledgement of Māori sovereignty was manifest, too. Legislation passed in British parliament was not implemented in Aotearoa. The South Seas Bill, for example, expressed that its provisions “did not apply in another’s sovereign domain”. Te Kara, the flag of the United Tribes, was assented in 1834 and gave legal recognition to Māori as a sovereign trading “nation”. From 1835 He Whakaminenga o Ngā Hapū o Nu Tīreni, the Confederation of the United Tribes of New Zealand, formally established a working parliament, though they had been meeting since the early 19th century.

Māori motivations to sign He Whakaputanga were, and still are, transparent. It was an alliance, a strategic investment into a working relationship with the Crown. It would affirm and enhance their mana, and ratify the covenant with King George and William IV. Should a threat from the French or the Americas arise, the Crown would pledge allegiance to the Māori cause. Māori did not need Pākehā. Pākehā needed Māori. It makes perfect sense that the Crown should want to bury and delegitimise He Whakaputanga. The Crown has refused to ratify He Whakaputanga for obvious reasons. After plunging a thriving economy into a national debt without permission from the motherland, why would you relinquish the high ground and the spoils of war?