Ahead of Waitangi Day, Jacinta Ruru and Jacobi Kohu-Morris imagine an alternative to New Zealand’s constitutional framework that gives Te Tiriti o Waitangi the mana it deserves and Māori a meaningful seat at the table.

In the early 1980s, fresh from law school, Sir Justice Joe Williams (Ngāti Pūkenga, Te Arawa) wrote ‘Maranga Ake Ai’ and recorded it with his band Aotearoa. It first aired in 1984 and caused a stir. It deeply offended many European New Zealanders. Lyrics included “Where’s my freedom from oppression? Cos that’s what my people need.”

It’s a song that we’ve been thinking about a lot as we look at the way our legal infrastructure treats Te Tiriti o Waitangi. Not just because of who wrote the song, or because the song itself was once banned from mainstream radio. But because the song speaks to something our families know about and something we want our country to “wake up” to.

One of the best ways we know how to make change is through law. With another year upon us since Te Tiriti o Waitangi was signed, we question here the very basis of our constitutional system as we seek to realise in law the potential of a te Tiriti compliant nation.

Sir Justice Williams is one of many Māori at the forefront of the movement to honour te Tiriti o Waitangi. Others (past and present) who quickly come to mind are: Hone Heke, Sir Apirana Ngata, Dame Whina Cooper, Hon Matiu Rata, Dame Ngāneko Minhinnick, Sir Eddie Taihakurei Durie, Moana Jackson, Ani Mikaere, Annette Sykes, Margaret Mutu. We adore their work, their visions, their courage. Williams himself has had a stellar career, first as a lawyer, then as a judge, and he now sits on the Supreme Court, the country’s highest appeal court, the first Māori to do so. He was knighted for his services to law in 2019.

The young Williams penned ‘Maranga Ake Ai’ in the early 1980s, capturing the deep frustrations of many Māori of the time. Fast forward to 2021 and some change is apparent. Te Tiriti is now referenced in most areas of law requiring decision-makers to have some level of regard to its intent. Most iwi throughout the country have agreed to reconciliation agreements with the Crown, receiving (albeit small amounts of) financial, commercial and cultural redress. Te Tiriti is now regarded as part of our unwritten constitution and there is a growing depth of Tiriti jurisprudence to lean on.

But even so, there are continuing problems across government and the constitution that stifle Māori rights and interests. The Waitangi Tribunal has described much of New Zealand’s law as still in breach of te Tiriti principles. The courts have only given lukewarm credence to the often weak legislative hooks to advance recognition of te Tiriti, and the government can fail to, or improperly carry out, its duties to consider Tiriti implications.

One major obstacle is New Zealand’s adherence to the doctrine of unlimited parliamentary supremacy. The concept was imposed over the top of existing Indigenous nations and legal systems in European colonial states across the globe. The continuing effect of this doctrine on Indigenous peoples’ legitimate claims to self-determination and self-governance is an important question for countries like Aotearoa New Zealand.

Parliamentary supremacy (or also known as parliamentary sovereignty) means, as a general principle, parliament can make or unmake any law, and no person or body can consider the validity of properly enacted laws. Parliament comprises the Queen, as sovereign through the Governor-General, and the House of Representatives of now 120 members, many of whom are now Māori. New Zealand’s constitutional arrangements, in particular, have been described as an “executive paradise”, where cabinet dominates the house.

Why is it a paradise? Because the only real check on parliament’s powers is the three-yearly national electorate cycle. It is unconstrained by a supreme constitution (as in the United States), or an upper house (like the United Kingdom’s House of Lords, or the senates of the United States and Canada).

But this can be problematic for Māori rights and interests because the electorate is predominantly non-Māori, and because te Tiriti occupies a paradoxical legal position. It is considered our nation’s founding document, yet it is, strictly speaking, unenforceable; it mainly relies on parliament to have any effect. This means “treaty rights are always in a slightly precarious position“. They are especially vulnerable if the majority public opinion is hostile or unsympathetic to Māori rights. 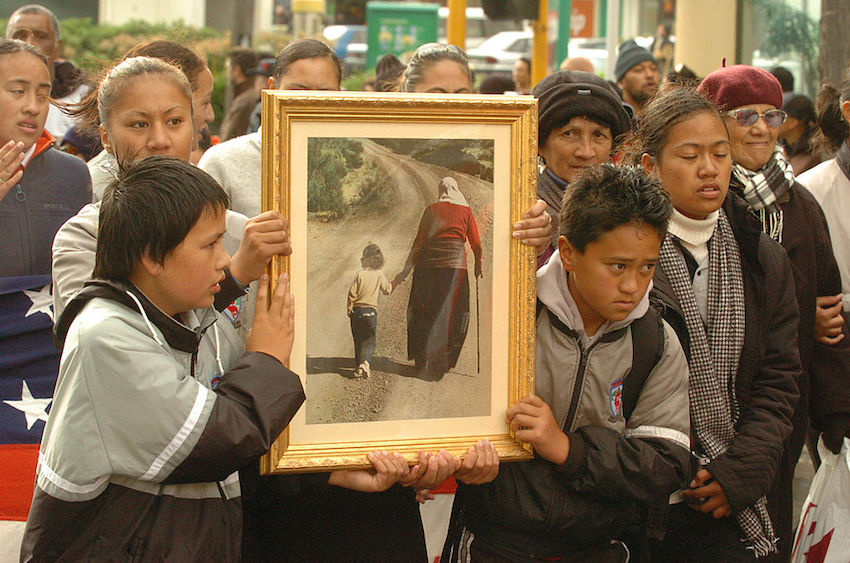 A group of students hold a photo of Dame Whina Cooper at the foreshore and seabed hikoi to Parliament, in 2004 (Photo: FOTOPRESS/Ross Setford)

This can often rear its head in clear ways.

An obvious example is the “foreshore/seabed” saga that commenced following the Court of Appeal’s 2003 decision that, yes, the Māori Land Court did have jurisdiction to determine whether areas of the foreshore and seabed were Māori customary land. The court said “the transfer of sovereignty did not affect customary property. They are interests preserved by the common law until extinguished in accordance with the law”.

The decision ignited fierce public debate and was an extraordinarily divisive period in New Zealand political history (recall the “iwi-kiwi” billboards!). The government, coming under immense pressure, responded. Parliament passed the Foreshore and Seabed Act 2004, effectively overruling the court’s decision, vesting full legal and beneficial ownership of the land in question in the Crown. Although the act was repealed and replaced by the Marine and Coastal Area Act 2011, many of the changes are cosmetic.

So, parliament can pass laws to remove Māori rights. Parliament can also pass laws that disproportionately and negatively affect Māori. One example is when parliament enacted the Electoral (Disqualification of Sentenced Prisoners) Amendment Act 2010, which banned those detained pursuant to a sentence of imprisonment from voting. Whatever your views are on this, it is clear that one demographic was stripped of their fundamental democratic rights the most. Sadly, Māori make up over half of New Zealand’s male prisons, and nearly two thirds of our female prisons. Despite strong criticism from the courts and the Waitangi Tribunal, it took parliament a decade to repeal that law.

These examples demonstrate that the place of te Tiriti – and by extension, the rights and interests of Māori – remains in a vulnerable state, despite the progress made in the last 40 years. The sentiment of Maranga Ake Ai continues to resonate: “how much longer must we keep on talkin’?”. In 2013, Justice Sir Williams wrote Lex Aotearoa, an extra-judicial article published to acclaim. He described the three stages of Aotearoa’s legal development, from Kupe’s law – the regulation of kinship communities grounded in core values such as prioritised importance of extended family, genealogy and reciprocity; to Cook’s law – a system prioritising individual property rights and freedom of contract; to the current law of Aotearoa New Zealand. He reasoned that the second law “rejected the legal relevance of the Treaty” and “acknowledged tikanga Māori only as a temporary expedient in the wider project of title extinction and cultural assimilation”. However, he sees promise in the evolving fusion of the first and second laws that make up our current legal system, especially as we begin to give more recognition to the first laws – Kupe’s law (tikanga Māori).

As the blending of two legal systems continues, how could te Tiriti limit parliamentary supremacy? This question goes to the heart of the country’s foundation, and as former Chief Justice Dame Sian Elias has said, “we need to understand that when dealing with fundamentals of the legal order, we need to think constitutionally.” Perhaps a useful starting point is to question whether, under our constitution, parliament should be supreme in an unlimited way.

Of course, it must remain free to legislate in the ways necessary to govern ordinarily and to respect its democratic mandate. But if we are prepared to entertain the possibility that parliament is not truly sovereign in an unlimited way in protection of something deeper and constitutional, then perhaps we could consider that the very document that planted the seeds of that very sovereignty might also temper its powers.

As far back as 1861, New Zealand’s first Chief Justice, William Martin, suggested that Māori only ceded to the Queen those powers necessary for the establishment of settled government and law. “In return they retained what they understood full well – the ‘tino rangatiratanga’, in respect of all their lands.”

A democratically elected parliament that constitutionally cannot infringe upon the protections afforded to Māori under te Tiriti o Waitangi would help to live up to its true promise. After all, this is not an argument for separatism, but a synergetic, mutually respectful partnership. As Williams and many others have argued, the Treaty is best understood not as one of cession, but as a framework for the distribution of powers between two peoples. How could this distribution be advanced? One significant option advanced by Māori is constitutional transformation.

In 2010, Māori nation state leaders established a Māori working group to engage in hundreds of consultative meetings with Māori throughout the country. Their report, Matike Mai Aotearoa, released in 2016, presents six constitutional structural transformation models as options to demonstrate the possibilities for enabling ‘different spheres of influence’. They are premised on constitutional design as envisaged in te Tiriti, advocating significant change to existing governance structures.

Another model is unicameral: a one sphere model focused on the relational sphere of joint decision-making. These models, along with the others, deserve close consideration because the implications of elevating te Tiriti to a position of constitutional authority must result in enhanced decision-making for Māori.

We also suggest a further option; that a constitutional status be developed that recognises the uniqueness of our founding document, that is neither dependent on a statutory gateway nor susceptible to majoritarian concerns. Of course, this would be a major step for New Zealand’s Courts to take but it is possible. The Supreme Court of Canada has identified the unique nature of first-contact treaties.

But if te Tiriti is to constrain the supremacy of parliament to make law, in order to better protect the rights of our country’s first inhabitants, new structures are required. Without structural transformation, the limit on parliament would be adjudicated simply by the state’s courts which have few Māori judges.

The Maranga Ake Ai lyrics continue to resonate with us in these summer days as we dream of the possibilities for a sophisticated discussion on the possibilities of adapting the doctrine of parliamentary sovereignty to realise the Tiriti promise of bicultural power sharing. Freed from the constraints of a principle imposed on us which may no longer reflect our legal and political reality, we might – together – reach a constitution that embraces all of our peoples, protects all of our rights, and reflects our shared history as we approach te Tiriti’s 200th anniversary in 2040.