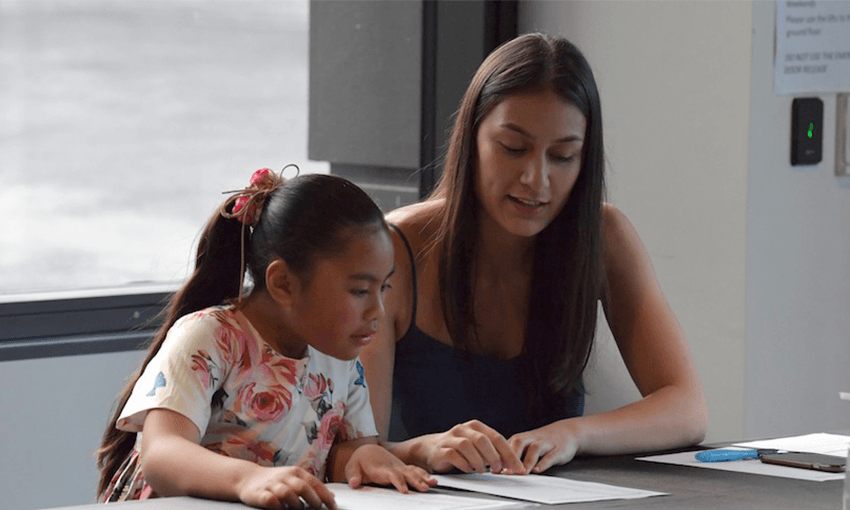 Celebrating Te Huka Mātauraka, a home away from home for Dunedin’s Māori students

Te Huka Mātauraka, the University of Otago Māori Centre, celebrates its 30th birthday this year as a crucial part of life for the university’s Māori students. Its manager Pearl Matahiki and student Sarafina Tipene reflect on what the centre means for them.

In 2017 when Sarafina Tipene left home to attend the University of Otago she was excited to travel south to begin carving out her future. But she quickly found herself missing her whanau, 1,500 kilometres away in Whangārei.

“I moved away from all of my family. I felt like it was really different, there weren’t many Māori kids at university and I felt lonely sometimes,” she says.

Like so many other new students Tipene struggled with the huge changes and not being near her whānau. But being one of only a few Māori students she knew made it harder, still.

In her first year, she accessed counselling services at Student Health but felt like she still wasn’t being heard. But then she found Te Huka Mātauraka, the Māori Centre, where she felt comfortable and heard as a Māori student.

Now, 30 years after the centre first opened, waves of Māori students still use it to find their home at the university and make connections with other students, tutors and mentors. In the traditionally Pākehā environment of tertiary institutions, Te Huka Mātauraka is a korowai for Māori students to wear as they navigate through their studies.

“Te Huka Mātauraka is one of very few places within the university where Māori students are supported to succeed as Māori. We acknowledge that te reo, tikanga, whanaungatanga, whakapapa, ako and oranga are vital to Maori student success and support students to be Maori and be awesome in a Maori environment.”

Pearl says sometimes Māori students have moved far away from their family for the first time and often they’re the first from their family to access tertiary study. She says this pressure is hard on students, so it’s crucial they’re given the support they need.

“Our Te Huka Mātauraka values are manaakitanga and tiakitanga to ensure all Maori students and whanau are welcomed under this korowai,” she says.

“These values are embedded in all that we do. From a mana whenua-led powhiri for all first-year Māori students held at a local marae through to Māori graduation and beyond. We work to support Maori students and in doing so develop a whanau of Māori students nationally and internationally who continue to remain in contact with staff.”

Going through some struggles during her time at university, Tipene says she tried seeking help from many different places. It was only when she approached the Māori centre counsellors that she started to feel heard.

“There are some things you need a Māori perspective on. For counselling, I went to student health but I didn’t feel like it was as useful as when I went to the Māori centre. I feel like they understand where I’m coming from… when I explained to them what was going on I felt like they had been through similar experiences.”

When her brother joined the university her whānau were welcomed onto the campus and cared for by the staff there. The experience and aroha helped put the family at ease that their tamariki were in a place they would be looked after.

“They showed them around and explained how everything would work and what he would need to complete high school and get into university, so they were really good [as being] that in-between link.”

This is an essential part of what the centre offers, says Pearl. While students are often faced with brand new challenges when starting tertiary education, for a lot of parents, the idea of their children going to face the big wide world is also scary. That’s why one goal of the Māori Centre is to create a smooth transition between home life and university life, not only for students but for their whanau too.

“Māori whanau are welcomed together with their tamariki,” Pearl says. “Our values are based in te ao Maori and we acknowledge the importance of tamariki to whānau. We take seriously our commitment to manaakitanga, whanaungatanga and whakapapa. So that whanau are assured their mokopuna are cared for through this academic journey.”

When she first arrived at university she was a really shy student. Te Huka Mātauraka provided support beyond the academic tutoring and counselling services and she now also works there as a kaiawhina. She says this role has helped her come out of her shell.

“They slowly built up my confidence. Every time I did a job really well or really quickly they would compliment me, saying I’m a good worker or that they see leadership skills in me, which were probably passing comments for them but for me, it was a big deal because no one’s ever said they see me as a leader.”

Pearl has seen thousands of Māori students go through their studies at the University of Otago and has had a hand in guiding them through what can be an overwhelming step of their lives. She’s also helped to guide the university to acknowledge the need for a specific Māori space.

It hasn’t always been easy to exist in such a traditionally European space, and Te Huka Mātauraka still has plans to grow and change. Pearl says the centre should be an example for other institutions in protecting and caring for their Māori students.

“We have always operated within a te ao Māori paradigm and this has been a successful model for our Māori students.”

However, it is not a model that always sits easily within the culture of a tertiary institution and she says there is still more work the institutions need to do to fully understand and embrace Te Ao Māori.

“Te Huka Mātauraka acts as the cultural conduit that connects students with staff, departments, other support networks, student groups and tribal connections, and I think centres like ours should be an exemplar for all tertiary institutions to develop.”