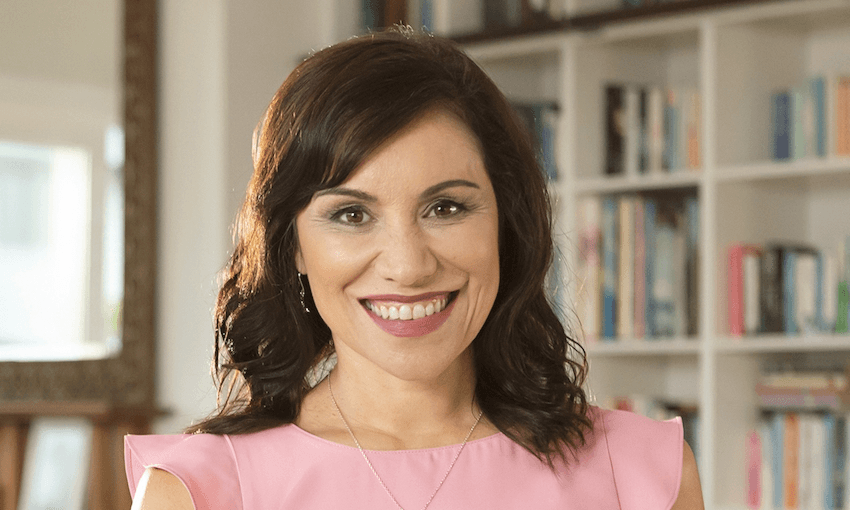 Stacey Morrison on te reo revitalisation: ‘You can be iwi hard and urban Māori proud’

She’s been a stalwart on our screens and airwaves for two decades and could easily rest on her laurels, but the indefatigable Stacey Morrison is all about giving back to her community.

Across Auckland on any given weekday, you’ll find a free te reo Māori class being taught, from Unitec and AUT’s popular classes to the various Wānanga and small community and marae groups. On Wednesday, Thursday and Friday, you’ll find authors and broadcasters Scotty and Stacey Morrison alongside other kaiako at Waipareira, Ngā Whare Waatea and Manurewa marae giving free lessons to anyone in the community that wants to come along.

Stacey (Te Arawa, Ngāi Tahu) is a familiar face to most Kiwis. She co-hosts The Hits drive show with Mike Puru and Anika Moa (unique for being the only mainstream radio show hosted by three Māori). She’s been a popular broadcaster and presenter for more than two decades, scoring her first role on What Now at the age of 18, although to many of a certain age, she was best known as the bubbly co-host of Mai Time, a groundbreaking show for rangatahi Māori that also launched the careers of a number of other Māori broadcasters and reo advocates, such as Quinton Hita and Teremoana Rapley. While many would forgive her and her equally successful husband for sitting back and enjoying the good life working in prominent media roles, the Morrisons instead tirelessly devote whatever spare time they have to the promotion and revitalisation of te reo Māori. As clever as they are talented, Stacey and Scotty were appointed kaiarahi at Massey University’s Te Pūtahi-a-Toi (School of Māori Knowledge) in 2017. As well as publishing the popular Māori Made Easy, Māori at Work and Māori At Home series of books, their ongoing work involves finding new pathways for kanohi kitea community-centred learning.

“When you hear the word co-design it might not mean much to people and it might sound like NGO speak, but what it means is you look at what the community wants, not just give them what you think they need.”

With the knowledge that people are time poor and embarrassed to make mistakes publicly, the programme aims to foster language in the home and to make lessons and wānanga easy to attend.

“In terms of the reo, you come at it from a few different angles. There’s what whānau really want, kids and our tamariki are a huge motivation. So the angle is for te reo to be the language of the home. Reo ūkaipō ano.”

For those who can’t come to classes during the week, there are weekend wānanga where you can bring the kids and they’ll be looked after. “They come on the weekend and we get them to design their own goals and look at how they’re gonna get there. We look at where they’re currently at, we play games, we look at situational reo. Maybe the goal is being able to stay in the reo before school. What is the reo we need? How do we remember it? How do we change any dynamics that stop us from speaking? Sometimes we can speak the reo but we don’t, so how do we change that? It’s about having fun, having positive associations and bringing it into our daily lives in a way that feels enriching rather than hard work.”

In a recent article for Te Kura Nui o Waipareira, a journal for Māori researchers and practitioners published by Massey and Te Whānau o Waipareira, Stacey wrote about the principles of co-design. In it, she writes that of most importance “is the principle of whakawhanaungatanga – relationship and trust building – in conjunction with manaakitanga – arming and upholding the mana of the people present – which work with the concept of kotahitanga”.

She explains further: “The most important thing is to not feel like we’re alone, and not feel like we’re the only ones that can’t get it. And sometimes be given words to push through these really hard feelings we’re having. Sometimes we get so locked up we can’t even give expression to how it feels, we just know it as a mamae.”

In academic circles it’s referred to as language trauma, but the Morrisons recognise the need for making reo revitalisation a flaxroots experience and not treating it as a problem to be solved by rigid pedagogy. “We just have to do whatever we can to meet our community. It’s not about them fitting into our framework, we fit into theirs.”

Over the classes, wānanga, reo hubs and public events such as waka ama, hundreds of people have benefitted from their community-based approach this year alone. And one of the best things about it, according to Stacey, is that it helps dispel the myth that te reo is only available to Māori who are engaged with their marae, hapū and iwi.

“You can be iwi hard and urban Māori proud. They’re not mutually exclusive. It makes me hoha when people talk about urban Māori as if they don’t have their reo. They do. Being urban Māori is a reality of our lives, but it doesn’t mean we abandon our iwi.

“It makes a huge difference to your ability to learn if you feel that you’ve got people with you.”