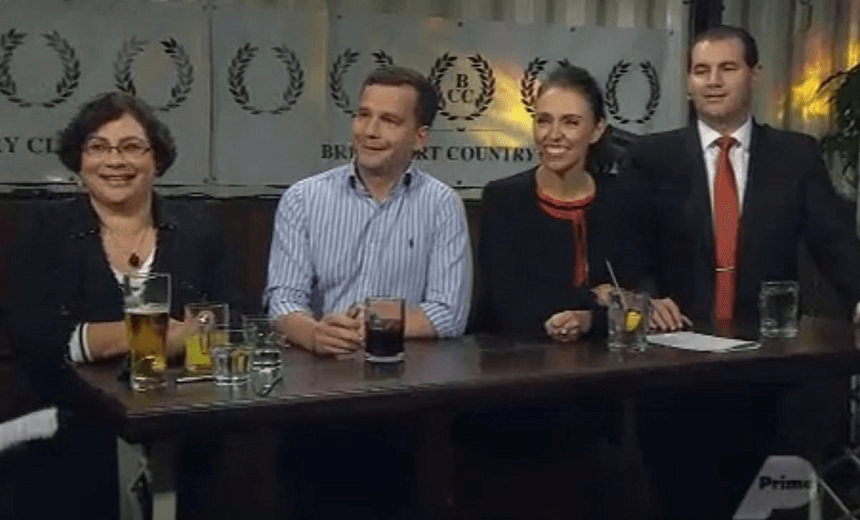 TUREI, SEYMOUR, ARDERN AND LEE-ROSS AT THE HAPPIEST POINT IN THEIR LIVES TOGETHER. PHOTO: BACKBENCHERS

Every politician wants our annoying council to pass the Unitary Plan

TUREI, SEYMOUR, ARDERN AND LEE-ROSS AT THE HAPPIEST POINT IN THEIR LIVES TOGETHER. PHOTO: BACKBENCHERS

Amazing political news: a grand coalition was brokered on the Unitary Plan. You just might have missed it because it was signed off in the witching hour on Prime TV.

August 3, 2016: the day peace broke out in New Zealand politics. After decades of bickering, sniping, and releasing lists of questions no-one will answer, our notoriously argumentative politicians finally found something they can agree on: the Auckland Unitary Plan.

They went to great lengths to keep their truce under wraps. It was negotiated in a remote location: the 10.35pm timeslot on Prime TV, about eight minutes into the show Backbenchers.

I was there to talk about The Spinoff declaring war. Unfortunately my interview quickly descended into an argument with an extravagantly dressed woman over whether I wanted to build high-rise apartments “next to my Granny”.

I assured her I did.

But joke’s on her: my Granny is dead.

The debate over the Unitary Plan is still alive and kicking. Some villa-owning Boomers don’t want it, despite feeling “a bit guilty” about living in gigantic ranches on top of the Harbour Bridge.

They likely have several Auckland councillors on their side. There are the usual suspects: Cameron Brewer has a full-time job trying to flush everything Len Brown likes down the toilet. Mike Lee wants to freeze Auckland in a 1950s time prison. Dick Quax opposes everything that’s happened since he won an Olympic silver medal in 1976. Sharon Stewart may not even get to vote on the plan because she was so in such a rush to oppose it. In February, Wayne Walker came up with the mind-bending argument that building more houses actually makes housing more expensive. Any and all of them could oppose the plan when it goes to a vote in August.

The Backbenchers Agreement 2016 proves they’d be out of step with the vast majority of political opinion in Wellington.

Labour’s Jacinda Ardern was one of the first to ratify the Treaty. She was unequivocal when quizzed by show host Wallace Chapman on whether she’d support the Unitary Plan.

“We absolutely need the Unitary Plan. And in fact we could have gone a bit further,” she said.

Green leader Metiria Turei also thought the plan should pass, despite it having some flaws.

“We think it needs to be accepted,” she said. “If it isn’t accepted there are no plans for managing the growth in Auckland.”

“There’s some wrinkles in it but overwhelmingly it is about addressing Auckland’s housing problem by supply,” he said.

“I think for the first time you’ll have a panel that agrees on something,” he said.

“We need the Unitary Plan to go forward. We need the council to adopt it because we need the supply.”

United Future leader Peter Dunne co-signed the agreement the following day, in a direct message sent to me on Twitter.

“Yes [I support the Unitary Plan],” he said. “But it is an Auckland Council issue, not a central government matter.”

Only New Zealand First and the Maori Party stopped short of a formal endorsement, with the former sending me a series of confusing media releases about protecting fertile rural land, and the latter not replying to my emails.

It’s still an imposing coalition of the willing; a veritable tsunami of political consensus bearing down on Auckland Council.

Now our councillors have to sign off on the plan. They should know that if they don’t, everyone in Wellington will hate them, and the Government will probably replace their useless political corpses with commissioners – provided they make it through the local body elections.

But no pressure or anything.