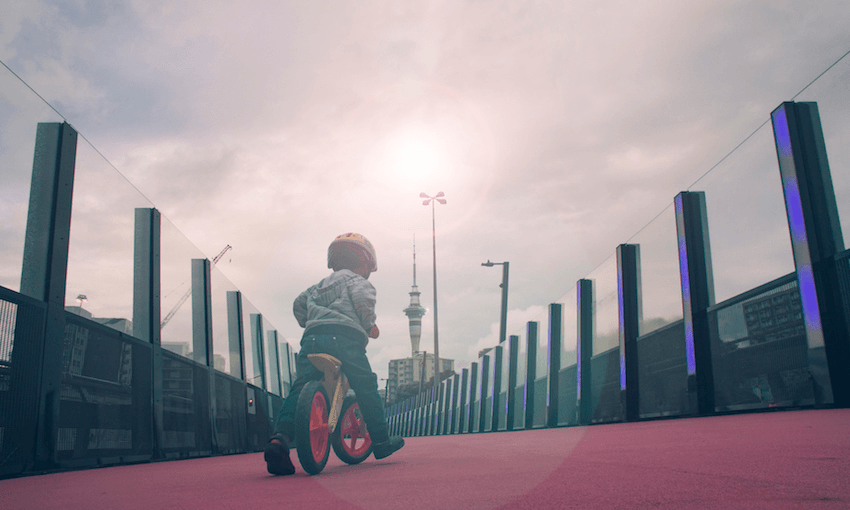 The truth about those ‘exaggerated’ Auckland cycling numbers

‘Cycleway figures in doubt’ says the print headline on an article by Herald journalist Bernard Orsman, and Mike Hosking has prematurely leapt in to agree. But what’s really in doubt may be some basic reading comprehension, says Jolisa Gracewood of Bike Auckland, who argues that critics compared apples with oranges – and ended up with egg on their faces

It’s about forecast cycleway usage. Bernard Orsman says in the Herald, based on ‘an internal AT report’, that the predicted numbers may have been ‘exaggerated’.

So, are the predicted numbers exaggerated?

You’d need a time machine to answer that because the forecast numbers Orsman’s evidently talking about are for 2026… which is eight years away.

But it doesn’t say anything about 2026 in the print version of the article.

Either way, it certainly appears to risk contravening the Media Council’s first principle of Accuracy, Fairness, and Balance (‘Publications should be bound at all times by accuracy, fairness and balance, and should not deliberately mislead or misinform readers by commission or omission’).

Thanks. So, just to be absolutely clear, when Orsman says ‘The business case for Nelson St predicted 986 cyclists would use the cycleway daily, but in January [2017] the count was 333’, it’s comparing last year’s apples with oranges from 2026?

Correct. Also, mini-apples, because January is still the summer holidays, always a slow time of year. The Nelson St cycleway is a fun example because it was started in late 2015 but not completed until mid-2017. Until then, it ground to a halt at Victoria St, which meant riders went from this…

Last October, it saw an average 380 trips a day, and this October it leapt to 505 trips a day. At this steady clip, it will hit the predicted 986 trips per day by the end of 2020. Probably even sooner, given the new Ian McKinnon Drive cycleway opening at the end of November, and a proper connection through to the Viaduct, and the Cook St and Victoria St cycleways to come.

You’re saying that new connections speed up cycleway use?

It’s plumbing, basically. You join things together and you turn on the taps. With more pumps, you get more pressure.

And that’s the other thing about the forecast numbers – they assume a minimum connected central city bike network in 2026. Currently, about two thirds of that network is delayed. For example, bike lanes along great North Road and Karangahape Road.

So Orsman (and Mike Hosking) are grumbling that the 2026 targets for a full bike network weren’t met in 2017 with a bare bones network. That’s odd.

Yep. It’s like planting an orange tree, then registering a complaint a week later that the buds don’t look anything like the nice fat fruit on the label. A child could tell you this is silly.

When will our cycleways bear fruit, then?

They’re already growing like mad, regardless, despite rocky conditions! Quay St, for example, has pretty much smashed its 2026 target eight years early. Look at it. Look. At. It!

Wow! Why is that?

Probably because it’s protected, it’s connected (to other already existing cycleways and to ferries and trains), and it’s where people want to ride. As Jeff Goldblum told us: Life, uh, finds a way!

And regardless of the still incomplete network, the people on bikes just keep coming: data just in from the citywide automatic bike counters shows numbers are up 17% over this month last year! (Not even counting the dash of Lime that’s spritzing up our streets). Show us another mode of transport experiencing growth this dramatic, in adverse conditions or otherwise. We’ll wait.

So the cycleway figures are not in doubt. Has Auckland Transport come out swinging?

It has – here’s cycling czarina Kathryn King confirming the numbers are not just on the level, but on the up and up.

Actually, it is kind of foul. Whether by omission or commission, inaccurate headlines and stories like these breed public distrust in the data. They also feed an anti-cycling narrative that not only endangers people on bikes, but tries to put a stick in the wheel of the kind of changes our cities need to make to survive.

The IPCC tells us we have approximately 12 years to save the planet, which will involve unprecedented changes to everyday habits: it’s the end of ‘magical thinking’ and time to get real.

Yikes. But as Yogi Berra said, it’s tough to make predictions, especially about the future.

Well, here’s one big lever we can pull: a 2014 study from New Zealand modelled the effects of lifting commuter biking in Auckland. Making the city’s streets bike-friendly would nearly halve commuting greenhouse gases by 2040, and the investment would pay off in tens of dollars of health benefits for every dollar spent. Auckland could act on this knowledge any time.

How about now. Is now good?

Yep. That’s also why we’d ask who benefits from encouraging the public to doubt the data at this pivotal moment for Auckland. We hear from Aucklanders every day who just want to know: ‘where’s my bike lane?’ In the meantime, they’re getting out there anyway, including parents taking the lead to help kids bike to school. How do you like them apples?

Bike Auckland is more than confident the forecast numbers will be met and in many cases exceeded well before 2026 – especially if Auckland Transport pulls together and builds the connected bike network and safe streets it’s committed to – and we’ll all taste the juicy benefits.