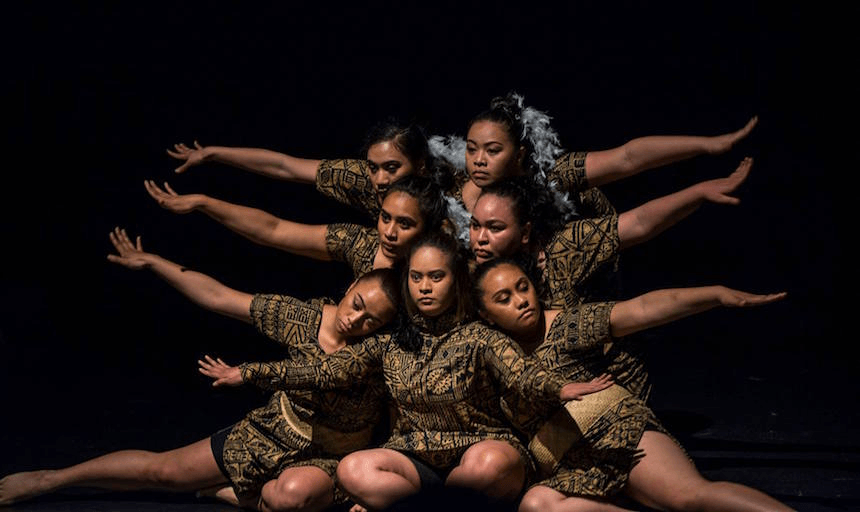 The body, the past, and the present: Choreographer Tia Sagapolutele on Polynesian dance

Artists are compelled to dismantle. The best of their generation are revered, reviled and remembered for being the most disruptive. But ambitious Māori and Pacific artists are eventually faced with the question of whether that desire to disrupt can cause real offense to family and community, and if so—is it worth it?

In a 2015 interview, Samoan artist Rosanna Raymond described the Polynesian body as “a genealogical space”.

“The body is the vessel that allows the past to be in the present.”

Ave, a dance piece by University of Auckland masters student Tia Sagapolutele that features in the upcoming Pacific Dance Festival, contrasts Siva Samoa, hip hop and contemporary dance to show the tension experienced by young Samoan women raised in New Zealand. It navigates a timeline of colonisation and the space between cultures.

“I feel it’s going to be controversial,” says Tia from her rehearsal studio at the university. “I have people in my extended family who are like, ‘It has to be like this,’ super traditional… but that’s what dance is about, challenging ideas. I’m ready for the backlash.”

Tia created Ave in 2016, but has rebuilt it with six other Pacific dancers—a collaborative effort that reflects their combined experience. It will feature among a collection of four works by women choreographers in the first week of the Pacific Dance Festival, opening tonight.

Born and raised in South Auckland, Tia’s mother hails from Savai’i, and her father from Apia. Her mother Ruta recognised a performer when she saw one and encouraged Tia in piano, singing and drama from a young age. In 2011, Tia joined Parris Goebel’s Royal Family dance academy, earning a place at the World Hip Hop championships with her crew, Sorority, the following year.

It was a year that was to prove formative for the dancer.

“A few weeks later when I got back, that’s when mum went into hospital.”

The passing of her mother in 2012 was sudden and devastating. Having lost their father when she was four, 19-year-old Tia and her four older brothers, Raymond, Some, Uoka and Mark (Deceptikonz rapper Mareko), found themselves alone in the world. She failed that year of her creative arts degree at MIT.

“I didn’t know what I was going to do next. I didn’t think that I would continue. My brothers were really supportive. They were just like, ‘Whatever you wanna do we’ve got your back.’ It was good to have that time off to breathe and reevaluate what I wanted to do, but I really thought of my mum. She’s the one that got me into the performing arts and I thought, ‘That’s what I want to do.’ It changed my perspective as an artist.”

With a renewed passion, Tia went back to school and graduated from MIT in 2016. While completing her post-graduate studies at the University of Auckland, she decided to move away from hip hop and start creating works that drew on fa’a Samoa and examined who she would become now she felt her cultural ties had been severed by her mother’s passing.

“Growing up, we weren’t really in touch with our culture. We were raised in that Western environment, speaking English. When Mum passed I lost that link to my family. So for me it felt very important to find out about my extended family, but I didn’t want to lose what I have learned as a dancer.”

The past decade has seen the emergence of a generation of bold Pacific artists who are challenging Pasifika identity and indigenous visibility in the art world. From Tanu Gago and the FAFSWAG crew, to Janet Lilo, Edith Amituanai, Greg Semu, Louise Tu’u, curators Ema Tavola and Nina Tonga, writer Lana Lopesi—the smartest kids in school, it seems, come from the islands.

Tia identifies with these icons of her generation and shares the lessons they’ve taught her: “Shigeyuki Kihara has been a big influence in my creative work, [poet and dancer] Jah Rager, Rosanna Raymond… How they challenge everything, that’s what I want to do. I’m finding my voice.”

Click here for bookings information and more about the Pacific Dance Festival.