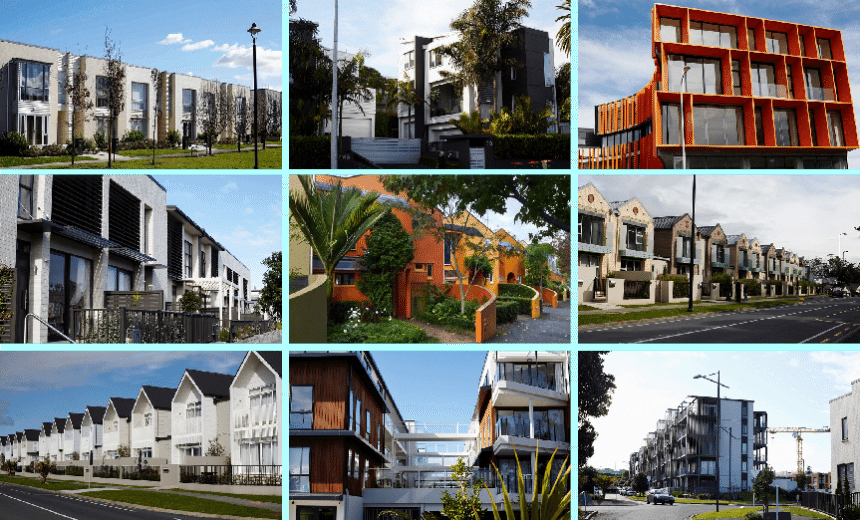 Apartments: long has the debate raged over whether building them would destroy Auckland. Today a special Spinoff pictorial exposé can reveal they’re already here – and loads of them are fantastic. Photography by Rebecca Zephyr Thomas. Story based on research by Catherine Smith.

Nothing scares a certain kind of veteran Aucklander more than an apartment. Their snug toilets. Their lack of freshly mown berms and rumpus rooms. The horrifying possibility young people are inside them.

Apartment terror has long been at the heart of Auckland’s Unitary Plan debate. Some people say the three-storey walk-ups zoned for in the plan are “desirable”; a much-needed antidote to Auckland’s housing cataclysm. But they have opponents. One group of Howick residents have launched a change.org petition to protect their “iconic 360 degree views” from the scourge of slightly tall buildings. These Mt Eden residents fear their villas will be kidnapped by a gang of renegade town planners and “carted off for townhouses”. Councillor Mike Lee wants to save Herne Bay from apartments by sweeping it into a huge sack and carrying it back to the 1950s.

Today, in a special Spinoff investigation, we can reveal that, in many ways, the density foes’ fears have already been realised: apartments have stealthily invaded huge swathes of Auckland. They started creeping from Takanini, Mt Wellington, and Penrose. Sprung up in Newton, Eden Terrace, and even the “leafy suburbs”.

What’s more, many of them appear to be … good.

In this photo essay, we will expose some of the medium density housing developments that many campaigners believe will destroy Auckland from the inside. Our pictures lay bare these apartments’ appealing architectural quirks; their eye-catching facades, and innovative interiors. They reveal a shocking level of space efficiency, which may in turn lead to a surprising amount of housing affordability.

Overall, their existence presents a vision for Auckland’s future, fiendishly nestled among its past and present. While some believe a city will turn into a nightmarish hellscape within minutes of the first consent being issued for a three-storey walk-up, our evidence shows it is still possible for Auckland to thrive in the grip of mixed density housing.

All you have to do is look at what’s already here.

Sit back because we are about to blow your mind: Auckland used to be really well-designed.

From the turn of the century until well into the 1940s, worker’s cottages, garden courts and apartments flourished around the city fringe suburbs, served by – holy shit – a great tram network. Fearing Auckland was becoming too good, officials ripped the tram network up in the 50s to make room for a motherlode of terrible roads.

Remnants of the old days remain. Tram stops are still visible along Queen Street and the surrounding suburbs, like little tombstones marking the last times this city made good decisions. The apartments are more uplifting. Though many of them are still punishingly free of insulation, their unsurvivably cold shells are a reminder of what this city once was, and could be again.

The mid-20th Century wasn’t so great. After they ripped up the trams, some architects seemed to actively engage in a competition to produce the worst house.

It helped drive the anti-density sentiment that lingers in the city to this day. People dreamed of quarter-acre sections, with fences, dogs, no trams, and several children per metre.

The apartments and townhouses built by Auckland Council to replace the “slums” of Freemans Bay were an exception. Look at these great grey things. I hear Guy Williams used to live in one.

Later, townhouses were developed in Wellington Street and the surrounding area, including these really great ‘80s post-modern houses.

Apartments from the year 2000 or so

Look at these interesting rectangles. The decks. The bay windows. The way they bask in the life-giving energy of our mother star, the sun.

Addison, in Takanini, was one of the first master planned communities. It has a shopping centre, parks, restaurants and cafes. It was also meant to have its own train station but some morons at the Papakura District Council decided that would be too much of a good, forward-thinking idea.

Apartments also snuck into Beaumont Quarter while people were panicking about Y2K.

This place used to be a gas works.

Things have improved markedly since then.

Recent apartments that are good

Stonefields is a shocking example of density right under our noses. The development, located on an old quarry site in Mt Wellington, started with town and terrace houses.

It progressed into apartment blocks.

Instead of ruining Auckland, these won awards from the NZ Institute of Architects.

The Thompson Park apartments in Mount Wellington have also won NZIA citations. They’re affordable, located next to parks and playgrounds, and not inhabited by demons. Everything you could ask for in a home, quarter-acre of not.

The Waimahia Inlet development‘s first aim is to provide affordable housing. But its second function is as an alternative vision to the sprawl of neighbouring Clendon.

Thankfully our councillors have decided to make the city more like Waimahia.

The Orange, wrapped around the heritage Orange Hall, leads the long overdue regeneration of Newton Gully and Eden Terrace. While some anti-density campaigners would argue it is orange, we argue that is a fine colour and if they have a complaint they can take it to the Press Council. It’s an early vision of the high-density developments that will surround the stations along the City Rail Link.

Sometimes density can sneak up on you.

Look at Blakes Green. A series of Auckland Design Manual videos expose the hidden truth about its buildings: they look like townhouses, but on closer examination reveal themselves to be separate apartments with garages hidden in a back lane.

At 510 Manukau Road, there are eight households in 1600m2 on a busy throughfare. The mere act of me writing that sentence made several members of the St Heliers Ratepayers Association claw at their heads in pain. They shouldn’t worry: the place looks great.

It’s not out of place. While many of us having been complaining about the Unitary Plan, the CRL, and the general concept of change, these medium and high-density developments have snuck in under cover of darkness. They’ve transformed huge sections of the city. And instead of destroying its character, they’ve changed it for the better.