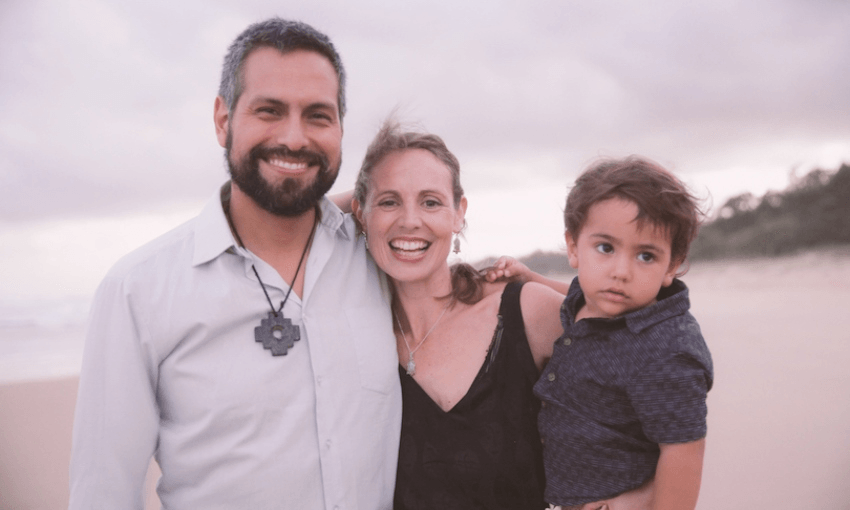 The Monday Extract: The Heart of Jesús Valentino

By Emma Gilkison
Guest writer
Made possible by

Former journalist Emma Gilkison writes about a routine scan at Starship, where a paediatric cardiologist said to her, “There are two issues with your baby’s heart.”

Content note: this book extract may be distressing for some readers.

Regina Spektor’s song ‘Fidelity’ filled the cabin as our plane took off for Auckland. I loved this song. Way back in the beginning of our relationship, Roy and I had danced to it in my lounge at one in the morning with the lights turned down low, drunk on red wine. At the time the song had spoken to me about myself, the single thirty-something who’d had plenty of flings but whose relationships had inevitably flopped.

How different things were now. I was sitting next to a man I loved fully. Inside me was our baby boy, who had brought about a new kind of intense, wondrous love unlike anything I’d felt before. My eyes filled with tears as the plane surged upwards. I was happy. I was grateful for the love in my life and the way it coloured everything more brightly, filling in pockets of loneliness I hadn’t even realised were there.

I was optimistic about the appointment with the paediatric cardiologist at Starship Hospital. Our meeting with Dr Brendon Bowkett had brought about a sea change. Roy and I now both felt surgery was worth a shot.

Auckland Hospital was a disjointed collection of buildings, some bordering a motorway. It seemed unlikely that feats of healing could take place within such a mess of ramps and aluminium windows and perplexing signs. The maternal foetal medicine clinic was much bigger than Wellington’s and the waiting room was packed with a cross-section of Aucklanders. A young Asian couple sat tapping their smartphones. Two Pacific Island women opened lunchboxes and unwrapped sandwiches for three small children. A rotund woman was wearing a pink tracksuit adorned with sequinned bunny faces. I wondered about the stories in the room. The general air of boredom belied the serious reasons that had caused us all to trek here.

Finally we met Dr Gentles. A small man with gnome-white hair, he suited his name. He performed a scan – an ultrasound just like the ones I’d had before – zooming in on the baby’s heart to look at its structure. I couldn’t decipher anything from the pulsating swirls on the screen. Dr Gentles said little. Afterwards we waited in the appointment room, Roy’s arm around my shoulders, until he came to deliver the findings.

“There are two issues with your baby’s heart,” he reported. “One is its position outside the chest. The other is the anatomy of the heart itself. There are defects.”

He produced a photocopied diagram of a heart and drew on it to illustrate the problems. “One of the ventricles is smaller than the other, and there is a hole between the two that shouldn’t be there,” he said. “The aortic valve that carries oxygen-rich blood from the heart to the body is much smaller than it should be.” I concentrated hard on the diagrams and his words.

“Sometimes we see hearts like this inside a baby’s chest and we can offer a series of surgeries, although the life expectancy is still reduced. But your baby also has ectopia cordis and his heart is not just partly outside his chest but a long way. The pentacles attaching his heart to his insides can’t just be squashed back inside the chest.”

“Your baby is not a candidate for surgery. If you continued the pregnancy he would be likely to die at birth or shortly after, if he makes it to full term.”

“How would he die?” asked Roy.

“He may die of asphyxiation or – ”

“Do you mean he won’t be able to breathe?”

This was not the news I’d been expecting to hear. I thought my baby’s heart was fine. It was just in the wrong place. I thought we had the chance for some miracle surgery. I was surprised. There were two problems with his heart. The sum total made his death an inevitability. I was calm for most of the time the doctor was speaking, then I broke down into tears I couldn’t stop.

We left the hospital exhausted and disorientated. Almost immediately I noticed the idea of a termination sat differently in my head. If there was a chance my baby could live I would’ve fought for him. Now there was no chance. Our baby was not going to be one of those miracle kids who survived when nobody thought they would. The farewell was a forgone conclusion. Was there any point in postponing this?

Back home in Wellington the information from Dr Gentles became the new norm to live with. Our darling boy was going to die. There was no hope for him. One way or another we would have to say goodbye.

I was struggling, searching for something to make his life still a good thing. I wanted to latch on to one bright thought, a speck of glitter, to make the situation bearable. I realised that the idea of fighting for even a slim chance of my son’s survival and doing right by him as his mother had been a major force in my thinking. And without that – well, was there any point? Grief now or grief later, what was the difference?

Maybe it was better to let go now. I feared that the rest of my pregnancy would be a sad slow mourning, followed by the fanfare and palaver of a funeral, of everyone knowing we had lost a baby. Did we want that? The full-blown version of grief and public ritual sounded exhausting.

Roy and I headed out for a walk along Oriental Parade. It was just after sunset and the sky was fast being scribbled over by winter’s darkness. We came across a wooden seat, facing the sea, that had small bouquets of flowers attached at either end. Plastic butterflies fluttered among daisies, violets and pansies. Sitting underneath the bouquets were two plastic octopuses wielding samurai swords – children’s toys. A bronze plaque attached to the seat explained this tableau.

Our Su-Yen, gone ahead to the arms of Jesus

See you at the end of the beach darling

“She liked butterflies,” said a woman who had appeared at the seat.

“It’s a lovely tribute,” I said, my chin trembling. “Did you know her?”

The woman explained she had been Su-Yen’s teacher. The little girl had died in a sudden accident. These flowers marked the one-year anniversary of her death. The teacher was taking a photo to share with Su-Yen’s class.

I didn’t want it to seem to the teacher that we were grief tourists, so I told her we were going to lose a baby.

I could tell by her eyes she meant it. In that moment, standing with a stranger on a winter’s night, observing a tribute to a girl we’d never met, it felt as though we were members of a group, united by the shared experience of losing children. The words on the plaque, “See you at the end of the beach darling”, went straight to my heart. I imagined the parents coming to Oriental Bay with their daughter, paddling on the beach, buying gelato from the shop at the end. Woven into the words were the parents’ mourning, memory, love and longing to see their daughter again. See you at the end of the beach darling.

Extract from The Heart of Jesús Valentino by Emma Gilkison (Awa Press, $40) available at Unity Books.