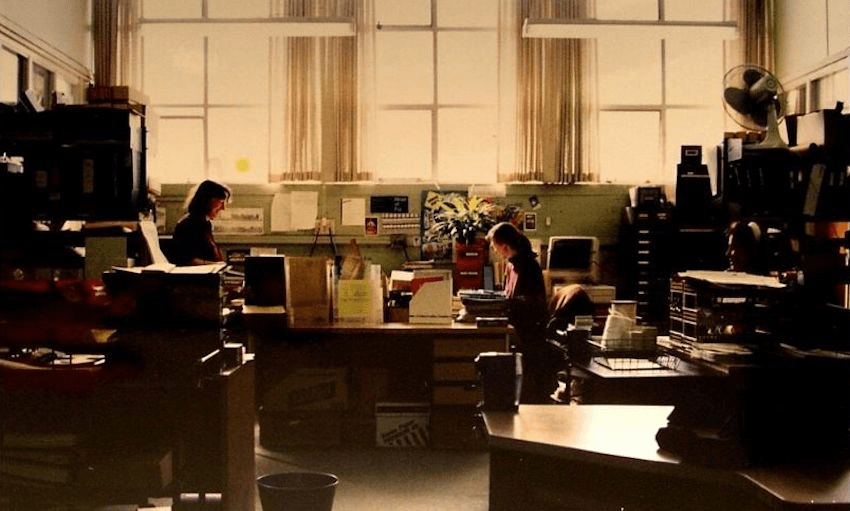 By Vincent O'Malley
Guest writer
Made possible by

Fresh off another Ockhams nomination, here’s one of New Zealand’s foremost historians on the realities of research – and the end of a golden era at our national archive.

It felt like I had finally reached the inner sanctum of New Zealand historians. In January 1993 I arrived in Wellington on a three-month contract researching Treaty of Waitangi claims. Not long after, I made my first visit to the National Archives reading room on Mulgrave Street in Thorndon.

Real historians did primary research – letters, diaries, journals, maps, photos and other sources – and here I was at last. Making history, not just reading it. The thrill of holding in my hands letters from governors, prime ministers, incredible rangatira such as Wiremu Tamihana or Hone Heke, was palpable.

Sometimes I tried to imagine the scenes when their documents had been drafted – in pencil, ink or later on a typewriter or computer. Were they sitting in a whare, or office, or maybe Governor George Grey’s mansion on Kawau Island? Were their words heartfelt or (as was the case with many nineteenth-century Crown communications with Māori leaders) disingenuous? What did they hope to achieve by their writing? Did they imagine one day, 150 years or more later in many cases, someone would be reading their missives, critiquing for meaning and context, and corroboration.

That space and its treasures is now called Archives New Zealand and I’m still here 27 years later. But the excitement of diving into the records, many unread for more than a century, remains. Often it is a tough slog – searching for pieces of the puzzle that don’t exist or were long ago destroyed as a result of fires, ship wrecks or through pure neglect.

Other times (and it is rare) amazing discoveries leave me buzzing. Finding the draft proclamation to the Waikato tribes demanding their submission to the Crown. Date: one day after the invasion of Waikato had begun. Suspected perfidy now confirmed without doubt.

Meanwhile, around me other researchers making their own incredible finds, or just methodically ploughing through another set of files in order to try and understand their chosen topic – maybe train stuff, iwi history, genealogy or a great-grandfather who fought in World War One or was caught up in the Samoan Mau movement.

Writing good history is a craft. Researching it is more like detective work. It’s the thrill of the chase. And the unknown.

Except from 2 March the chase will become a part-time one. Digitisation is the way of the future, we are told. Reading rooms are a relic of the past. Over the past decade, we are told, there has been a steep decline in visitor numbers. Halving reading room hours to 9am to 1pm each day will enable Archives New Zealand to devote more energy into digitising their records and making them available online. In this way, it is claimed, “better access” will be provided “for a greater number of users”.

I can almost see the appeal. Why bother serving a few dozen people each day when there are thousands of online hits to be accumulated instead?

If only it was that simple. Archives New Zealand holds more than seven million unique records. The process of digitising them will take many years. In many cases, it may simply be impossible.

In recent years the digitisation of all kinds of materials has helped to transform the nature of historical research, opening these sources up to a wider audience. Digitisation is a good thing. But not when it is funded by cutting core services.

Adding insult to injury, the move to turn our national archival repository into a part-time institution was announced without any prior consultation with members of the public or professional bodies representing historians and researchers. And yet, these cuts are going to severely disrupt all kinds of future historical research. In some cases, such research will become untenable.

Among other things, expect research on outstanding historical Treaty of Waitangi claims to take longer. And work on Marine and Coastal Area claims. Or what about students attempting to write theses within the time constraints of their university enrolments? Maybe they should just choose a non-New Zealand topic instead, just like the old days.

The examples are endless. In effect the time and costs involved in undertaking any kind of historical research at Archives New Zealand will double. The hardest hit will be those visiting reading rooms from out of town or overseas. What was, for example, up until now a one-week visit to the airport industrial park that is home to the Auckland regional office will after March take a fortnight. For many, it will no longer be affordable.

Already, historians are talking of canceling planned projects that will no longer become feasible. And as Anna Green has noted, the timing could not be worse. In 2022 New Zealand history will be taught in all schools. If anything, we should be expanding access to these archives (such as Saturday openings for those who work the rest of the week), not cutting them.

That point is reinforced by the many Māori who have noted, since the announcement was made, that their taonga is held by Archives New Zealand. How is cutting access to the letters and other treasures of their ancestors consistent with the Crown’s Treaty of Waitangi obligations?

Archives New Zealand is a wonderful institution full of dedicated staff, passionate about protecting, preserving and sharing our cultural heritage. But it is also a victim of the chronic underfunding of our arts, culture and heritage sectors dating back many years.

Again, that is evident in multiple ways, including the National Library’s current culling of up to 600,000 books from its overseas published collection in order to free up storage room for more local works. Or take the Public Lending Right scheme that compensates authors for copies of their books held in public libraries. Total payments have been frozen since 2008.

The Ministry for Culture and Heritage’s Awards in History scheme, intended to enable historians outside universities to work full-time on research projects that will lead to publications, has usually been around $100,000 per annum (though once reaching $150,000) since the fund was established in 1990. That is not per researcher, but the total sum, typically divided up between 8-12 successful applicants each year. Try spending three years researching and writing a book on $12,000 funding, the current maximum individual grant possible.

Meanwhile, heritage landscapes and sites across the country, and especially wāhi tapu, are under perpetual threat of destruction or development, the agencies charged with their protection often woefully resourced to do their jobs.

It does not have to be this way. A tiny sum relative to overall annual Crown expenditure would be transformative in so many ways. Archives New Zealand could get to digitise records while ensuring ongoing public access to them. New Zealand writers, many of them on measly incomes, might receive a modest boost that enables them to continue their craft and acknowledges their importance to society. Our heritage would be protected, preserved and cherished. All of these things are possible. But only if, as a nation, we care about our cultural heritage.