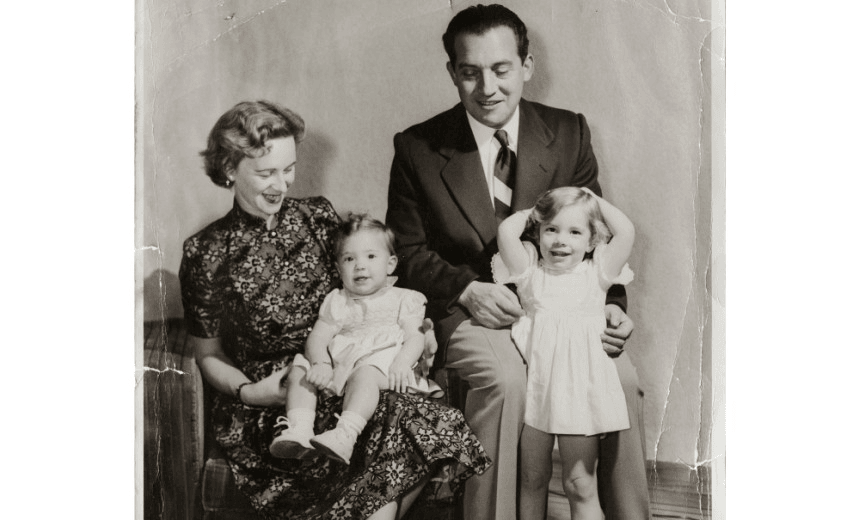 Book of the Week: a heartbreaking work of genius by Diana Wichtel

Diana Wichtel remembers being told by her Uncle Sy, some 50 years ago, “never forget you are a Wichtel”. Those familiar with Wichtel’s television reviews and features at the Listener will know her for the quality of her writing, her astute observations, her intelligence, her wit. She’s characteristically funny here too — noting, for instance, that over the years, she has been referred to as Witchell, Wincell, Mitchell, Twitchell, Wotchpell and as a television critic at the Listener, “you stupid Bitchtel” — adding levity to what is a moving and powerful story.

“This book is my personal account of my father’s story,” she writes in the author’s note. That is, the story of Benjamin Wichtel, known as Ben, one of the few survivors of a clan of Polish Jews murdered by the Nazis. I say “murdered” deliberately, as that’s the word Wichtel uses throughout this memoir. Almost all of four generations of her father’s family were murdered by the Nazis.

This is what she understood as a child; her father and another man had jumped off a train destined for Treblinka, the train that was also carrying his mother and five siblings. He rolled down the bank into the snow and waited to be shot, only he wasn’t, and spent the next three years hiding in a box in the forest. Nobody had told her about the gas chambers when she was a child though, and perplexed, she would ask her father, “How could you leave your mother on the train?”

“They would shoot you,” her father replied.

“Why didn’t everyone run away?”

“They would shoot you.”

After being liberated by the Red Army in 1944, Ben made his way to Sweden, then to New York and finally to Vancouver where he met Patricia Scantlebury from New Zealand, who he married and with whom he had three children. Growing up, Witchtel remembers happy times and strange times. “There was Daddy Mad Face and Daddy Angel Face.” Daddy Angel Face would thrill the neighborhood children by producing nickels and dimes from their ears, and arrive bearing chocolate turtles, toys and new-fangled gadgets. He also knew seven languages and played the balalaika, the zither, the banjo mandolin and just about any instrument he got his hands on. She remembers a gentle man.

Her father also had nightmares, became increasingly prone to rages and struggled with his mental and physical health. Life for the family began to unravel. They shifted to New Zealand when Wichtel was aged 13 and as far as she knew, her father was going to join them. He never did, although it was never clear whether he really had intended to join them and his plans went awry, or he never planned to in the first place. The letters to his children got weirder and rarer and eventually stopped altogether. She was 18 when she got an early morning phone call, informing her he’d died, months after he had. She didn’t know of what, or even where.

“Remembering is an exercise in self-loathing,” Wichtel writes here as she starts pulling together what she does remember of the letters she received from her father from the other side of the world. “Diana I worrie about you a lot I don’t know why, maybe because you seldom write to me.” Having re-read the letter dozens of times, she now writes: “I cling to that word ‘seldom’. I must have written to him.”

She sends out emails and letters, and starts making phone calls around the world in an effort to recover “the mystery that shattered the remains of the Jewish branch of our family, and sometimes still threatens to split asunder what is left of us”. She discovers and develops relationships with relatives in the US she didn’t know she had. She goes to Poland, where she visits the sites of the extermination camps in Auschwitz and Treblinka. She travels to towns and villages, where she strikes up conversations with descendants of those who have their own personal stories of what happened to Polish Jews after the Nazis invaded Poland. She hears of the acts of kindness by some Polish non-Jews that allowed a minority (ten percent) of Polish Jews to survive. She goes to Praga, a district in Warsaw, where she finds the house that her father would have regarded as home, and to a site in the forest where he might have hidden during the war, in an underground bunker where the ceiling was so low you had to crouch because there wasn’t room to stand.

The book’s narrative – of a New Zealander trying to make sense of that which can never make any sense – brings this barbaric period of Western history very close.

I’m privileged to have known Diana for over 15 years as a colleague and a friend. In the early days, she told me a bit of what happened to her father, or what she knew of what happened to him, and how much was unknown, not really talked about. In recent years I knew of her efforts to find out more, and was aware of the tenacity required, and the grief and pleasures that have come out of that search. But I never really comprehended any of this until reading this book.  I thought I’d heard it all; I didn’t expect the book would make me cry, certainly not as much as it has.

This is a story that reminds readers of the atrocities that ordinary people did to each other, the effect on those who survived, and the reverberations felt through following generations. It breaks your heart, but the side effect of reading this remarkably compassionate approach to an extremely painful history, is that it also encourages you to open your own heart, or at least think about doing so. “A book must be the axe for the frozen sea within us,” said Franz Kafka. This book is that.

Driving to Treblinka: A long search for a last father by Diana Wichtel (Awa Press, $45) is available at Unity Books.