Alie Benge on the book that built a shimmering private world for her and her sisters.

I own two copies of Little Women. One is bound in white leather, has gilt edges, a gold filigree pattern on the front, and the heft of a family Bible. Each copy of this edition is made to order. It arrived in the mail on my 25th birthday – a present from an ex-boyfriend who’d once noticed that every time I spoke about Little Women I put my hand over my heart and sighed deeply. He’d planned to buy it for me when we were together, and though we’d broken up before my birthday he still wanted me to have it. When I saw what he’d given me, I hovered my finger over his name in my contacts list, wondering if we should get back together. As for my other copy, I don’t remember who first put it into my hands, but I remember reading it in bed at seven or eight years old, reading it on the lawn, and on the library bean bags, and in a tree – which was disappointingly uncomfortable, but Jo read in a tree so I stuck it out. I kept a list of words I didn’t understand and would take it to my parents the next day. “What does it mean to ‘put on airs’?” I try not to open this copy anymore because the spine has broken and it flaps open, revealing the gum binding, and the pages feel like they could easily tear away if I wasn’t careful turning them. Last year I rented Little Women as an audiobook for my commute, but had to stop because I was getting to work with splotchy eyes from an hour of weeping in my car.

My sisters and I watched the 1994 adaptation so many times that we’ve memorised the whole script and can find a quote to fit any situation. When I cut my long hair I got a text that said, “Your one beauty!” We can’t walk past the limes in Countdown without saying, “Are limes the fashion now?” Growing up, we would argue over who was which sister. Sarah thought she was Jo, which was absurd because obviously I was Jo and she was Beth. She maintained that I was Meg, which I was appalled by. Aimie, the youngest, is Amy through and through. We eventually created composites and managed to settle the debate forever. I’m Jo/Meg. Sarah is Jo/Beth. As Aimie has gotten older she’s become Amy/Beth. When I say we finally settled this, I mean that I was well into my late twenties.

Some stories you read, and you love them, but then they go back on the shelf. Others, like Little Women, you consume again and again. You want to roll in the stories, to hang them over your shoulders like a coat, and let them travel with you through your life like a companion, like a sister. 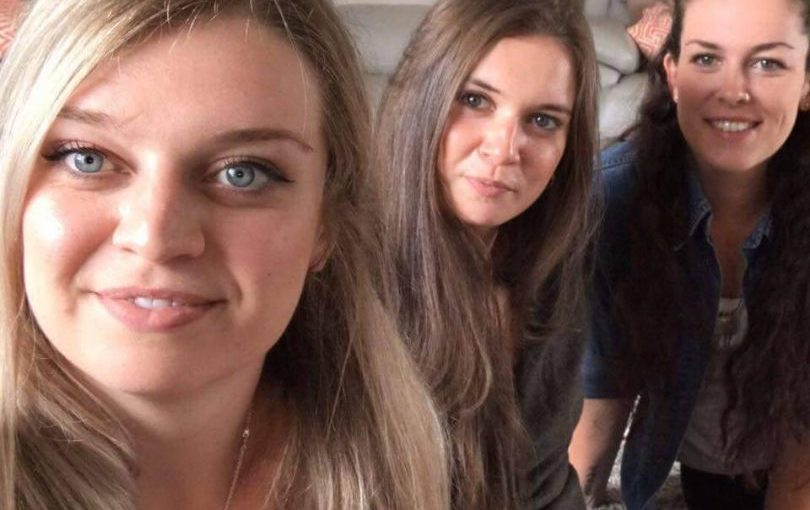 There is something fascinating about the lives of sisters. We have the Mitfords and the Brontës, Marian Keyes’ Walsh girls, even the Kardashians. The nature of the friendship is complicated and fractious, and they also live in a kind of isolation. The world of sisters is private. Each group has its own language and games, and shared history. No one else is let in, we can only watch when allowed.

I have this feeling, which I’m sure many have, that Little Women belongs to me and my sisters. There’s something painful about other people’s enjoyment of it, because it’s our thing and for so long we didn’t realise other people even knew about it. It’s been a disconcerting experience to read of other writers, like Patti Smith and Simone de Beauvoir, identifying with Jo and realising our private world with the March girls was shared with other people. Some unreasonable and reactive part of me wants people to acknowledge how important the story is to me personally before I give them permission to enjoy it. It’s distressing to hear others talking about Little Women, because it’s like they’re talking about me without realising that I’m there and can hear them.

Many seem to have related to Jo as a writer, a tomboy, or someone who struggled with the expectations of being a girl in the world. I wasn’t a tomboy, and I had no literary ambitions except to be allowed to read in peace. For me, it was the family unit that I related to. Like the Marches, my sisters and I were uniquely alone in the world. By the time the book found its way to me, I’d already stopped counting the times we’d moved houses, regions, and countries. I’d been uprooted from communities so many times that I’d lost any expectation that relationships would be permanent. Before finding the book, I’d been living in an isolated village in the Ethiopian Highlands where there were no other English speakers. My best friend and I didn’t share a common language and worked out our games with signs and charades. My concerns in those years were with sickness, the leopard in the backyard, the bowls of blood and beads that were left under the tyre swing we’d unknowingly hung from a tree that was worshipped by the local people. And then suddenly I was back in New Zealand, being told by other women that I shouldn’t wear gumboots to school or clothes that had rips in them. People didn’t raise pets to eventually eat. On TV there were cartoons, and the Spice Girls, and people selling exercise machines. The only thing in my life that had remained unchanged was the fact that I had a family.

The stories I read were a point of consistency. No matter how many times I returned to Little Women, it was always the same. In a way that I didn’t have the language to express as a child, Little Women was more than a story, it was the house I grew up in. The March sisters, along with Anne Shirley, Heidi, and Milly Molly Mandy, linked hands above me, like a roof.

The March family didn’t have the right clothes. They were barred from full participation in society because of their poverty and their strict morality. Only a few scenes in the book take place outside the family home, and when they do leave, disaster waits. Amy falls through the ice, Meg compromises her values at a ball, Beth catches scarlet fever, their father is injured in the civil war. The family home is a place of safety and sureness, a retreat from a world that they don’t quite fit into.

The Alcotts also moved more than 30 times before Little Women was written, often to escape the debts their father had racked up. Although the book is based on Louisa Alcott’s own life, these moves don’t make an appearance in the story, but anyone who’s grown up with the same instability might see it shimmering over the text in the restlessness, the uncertainty, the isolation that she maybe didn’t mean to include but which worked its way in subliminally. 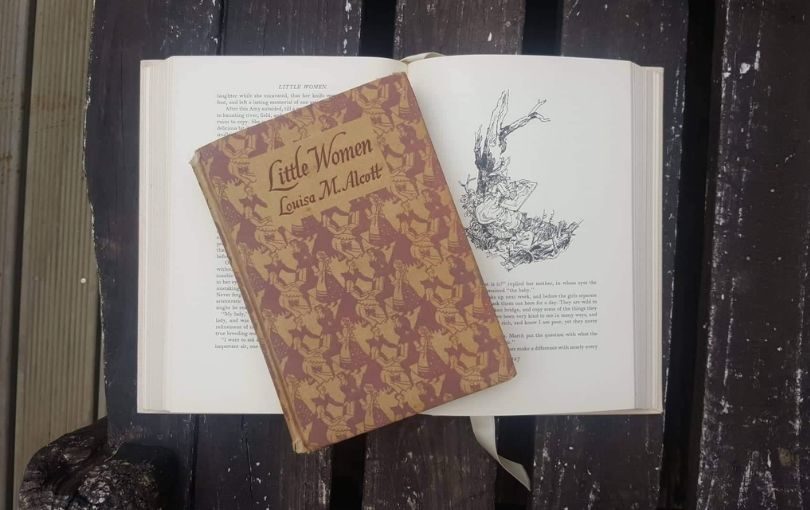 I returned to the book in preparation for this essay. It had been quite a few years since I read it. I was struck the simple elegance of the writing, the vitality of it. “Beth’s Secret” is devastatingly well-written without becoming cloying or sentimental. The proposal scene rejects traditional tropes and manages to be funny, honest, and slightly disconcerting. This isn’t just a relatable, fun story for girls. This is a beautiful work of art that shines for an adult as much as for a child. Not every children’s book holds up upon rereading. I broke my own heart by going back to Little House on the Prairie and realising Pa was selfish, controlling, and neglectful. The book was so appallingly racist that I would never put it in the hands of a child. Famous Five is a good time but the gendering of literally everything is frustrating as hell. The Faraway Tree is still a banger, but I appreciated it on a nostalgia level. It’s fun, but that’s all. Little Women, however, had layers that had aged with me, and that I could only relate to as an adult, like circles of meaning that had been waiting for me to come back and understand. As a child I enjoyed the raucous joy of their games and plays, burning Meg’s hair, creating newspapers, and befriending the boy next door. As an adult, I could hear Alcott speaking through Jo about her own struggles with identity and freedom. She famously wanted Jo to be a literary spinster as Alcott herself was, but her editors forced her to marry Jo off. She does so, but you can feel Jo kicking and screaming all the way. There is something so distressing about her eventual conformity, as though underneath the calm resignation is a wild animal shrieking in a cage.

Alcott is quoted saying, “I am more than half-persuaded that I am a man’s soul put by some freak of nature into a woman’s body … because I have fallen in love with so many pretty girls and never once the least bit with any man.” Though considering the time, it’s possible this was about power and autonomy rather than gender in isolation, but you sense that both Alcott and Jo struggled with something that they didn’t have a language for – not just the destiny they were being pushed towards, but with the things they were supposed to want but didn’t. Each sister has different desires; wealth, a family, and in Beth’s case, more life. Each desire is presented as equal, except Jo’s, which so closely mirrored Alcott’s own, and was written as something to be overcome and left in childhood.

This is a book about growing up that doesn’t try to reason away the sadness of it. Jo says to Laurie, “We can never be boy and girl again: the happy old times can’t come back, and we mustn’t expect it. We are man and woman now, with sober work to do, for playtime is over.” Jo is not Peter Pan, gathering fellow children and trapping them in infancy. Jo’s resistance means she is left behind by her sisters. The noise and games of childhood wind slowly down, getting quieter and further away, until Jo finds herself in an empty room, suddenly so lonely that she looks for something to lean on. This book is not wish fulfillment or fantasy. These are ordinary girls with ordinary lives, who grow into ordinary adults. But Alcott shows us the sparkling brilliance of ordinariness. It’s something that can’t be seen directly, only out the corner of the eyes.

Various editions of Little Women by Louisa May Alcott, as well as books linked to the new film, are available from Unity Books.