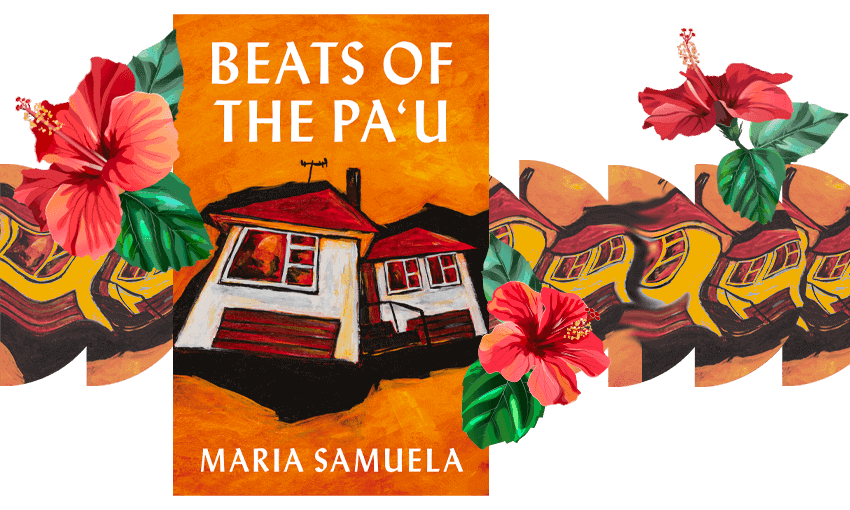 By Audrey Brown-Pereira
Guest writer
Made possible by

“Listen to that drum beat. That’s the sound of home.”

Have you ever heard the beat of Cook Islands drums? Wooden drumsticks moved by the mind and heart with arms and hands, pounding with purpose against a carved wooden drum. Beats that enunciate storytelling of a universal language, which are fast and slow, light and heavy, but always confident and sure. Whether you possess rhythm or not, your body can’t help but move, through the tapping of feet or nodding of head, just like Beats of the Pa’u written by Maria Samuela. This is her first book, a collection of nine short stories, published by Te Herenga Waka University Press.

Samuela, a writer of Cook Islands descent, gifts us intimate, beautifully-crafted stories of first and second generation Cook Islanders living in New Zealand since the 1950s. Themes of coming of age, isolation, connectedness, disconnectedness, love, lust and hope, are explored with a tenderness that breathes gently from the characters on the page. Each story explores relationships within families that are often intergenerational, are at conflict with expectations of roles and responsibilities and have an omnipresent feeling of loss.

The opening short story, ‘The Promotion’, is a poignant telling of father and son – Taki and Kura – struggling to connect the distance of time between them. It’s set against a cold Porirua, far removed from the taro plantations of Rarotonga, and home to meat pies and the TAB. Newly arrived from the islands, with sparse belongings, Kura enters his new home and new family with shoulders of doubt, trying to reconcile the love of the late mother he never knew with a father he’s not sure he wants to know.

Using present and past tense narratives of father and son, Samuela provides a fly-on-the-wall measurement of emotional dissonance. The reality: New Zealand is not all it was imagined to be, but rather a place of “watered-down milk and honey”. Despite the disappointments, ‘The Promotion’ remains hopeful and resilient, providing nuanced insight into why those like Taki and Kura have chosen to migrate and create new beginnings, far away from the comfort and familiarity of their island homes.

Elsewhere, Samuela movingly depicts the beauty and strength of sisterhood. In the coming-of-age story ‘Sisters’, a magnolia tree and its flowers – strong, alone, peculiar, slow to blossom – become a symbol of the main character Ana’s mother, who came to Aotearoa alone and now, throughout this story, is present through her absence. “The magnolia bush remained unwavering.”

Ana is an only child, kept at a distance by her cousins, even when they’re within her family home. Her aunties, though, centre their love of their sister on Ana, which she reciprocates in kind. Samuela describes the extended family gathering as a home almost bursting at the seams, with love that is loud and full of laughter, with memories and tears that are quiet and introspective.

In one scene, Ana lovingly prepares the labour-intensive mainese, a treasured Cook Islands dish covered with yellow dressing and specks of white, canopied over pink potato salad, with slices of beetroot, carrots, peas, oil and eggs. She recalls her mother’s wisdom: “The secret to the perfect mainese, she said, was in how you made the dressing. ‘Don’t rush with the dressing, baby. Add the oil to the egg yolks bit by bit.’”

In what I imagine to be an endearing lullaby for Ana, a dream-like sequence concludes ‘Sisters’: it is a celebration of goddesses, uninhibited in their bodies, who imbue love and a light that is iridescent, powerful and forever connected beyond the ether.

While Samuela maintains a reverence for the characters written, there is also a multiverse of complexity: there are no fairy tales here. People bleed, have scars, fight, cry, die and mourn.

The short story ‘Ugly’ is an empowering tale of a young girl who embraces her inner superpower, not because she wants to but because she has to. No time for self-pity or helplessness, she’s too busy to feel sorry for herself – as the reader you can’t help but feel protective of her. For me there is a Sāmoan word of sympathetic endearment that immediately comes to mind: talofae, poor thing.

The girl bathes in browning water after her siblings, yet Samuela presents this as a quiet reprieve of strength. “At least she gets to bathe in silence.” The reader becomes part of the girl’s private universe. She explores her wounded body, seeing skin and sores festering, healing next to and on top of other sores and scars. ‘Ugly’ conveys a pungent sense of shame, amplified by gossiping adults and monsters – children who throw stones, and find pleasure in parading stolen and sodden underwear across the playground. There is a disturbing, horror-like scene – where I thought of Carrie – in which if only for the blink of an eye, you can’t help but grin:

A swish of wind brushed the back of her neck and she turned in time to watch a shapeless mist descend upon them. Falling like fog, it drifted, creating a film that smudged out the children’s faces. It felt like cooling rain to her, but the others around her screamed as if the droplets were acid … Joy. That’s the word she was looking for. This was what it felt like.

I read Beats of the Pa’u at my home in Sāmoa, and thought of my childhood growing up in South Auckland to Cook Islands parents who migrated, met and married in New Zealand in the 1970s. Samuela achieves such authenticity in her writing that when reading her stories, I became that sister or cousin in the kitchen, the church, the dance hall. As each story unfolded I was engaged, watching intently, as if they were my own family. Yet Samuela’s words are woven together with welcoming ease. The journeys she has created are open to all who take the time to read, to immerse themselves and be part of our community. “The heart in this book is real,” as she writes in the acknowledgement.

With the exception of the late Alistair Te Ariki Campbell, Mīria George and Courtney Sina Meredith, there are very few published works from writers of Cook Islands descent in mainstream New Zealand literature. Beats of the Pa’u will continue to enrich the literary seascape, with storytelling that is layered and textured with rich colours of warmth, just like the Cook Islands and our people’s new homes in Porirua, Tokoroa and South Auckland. The drum beats of Samuela’s words beckon you.

Beats of the Pa’u, by Maria Samuela (Te Herenga Waka University Press, $30) is available from Unity Books Auckland and Wellington.