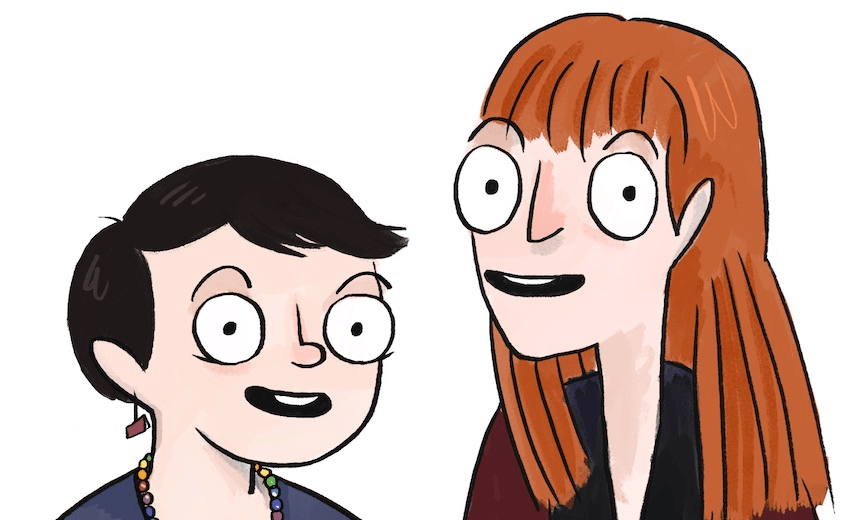 God bless the children, and The Sapling: the state of kids books in New Zealand

Adult literature in New Zealand gets most of the press, but kids’ books is a fresh and exciting field, writes Sarah Forster, co-creator of the brilliant website The Sapling.

Have you heard of Ruth Paul? How about Bob Darroch? Or Phillip Webb? Jenny Cooper? Fleur Beale? Des Hunt? I’ll help you: each of these author has written or illustrated (in the case of Ruth and Bob, both) well over 20 books. All of these authors are mid-career children’s book authors who have won many awards between them: but outside the children’s book industry, they are all but invisible.

Here’s the thing. Most print review media – by which I mean newspapers, because much as they seem an ancient artefact, the fact remains that they have subscribers – cover children’s book reviews maybe once a month. The same goes for The Listener. You need to be Joy Cowley, Maurice Gee, or Ted Dawe to get a half-page interview in a main media format. So, a living legend, or a controversial figure.

I began thinking about this topic when I saw Donovan Bixley in the New Zealand Women’s Weekly. In which of course I learned that he married his high school sweetheart, and has a beautiful family. But not so much about his illustration technique, his working day… etc. Still, that placement is certainly building his personal brand.

In the world of retail, books or no, brands sell. Authors create personal brands through their work, which are perpetuated to media in promoting their upcoming books. But when New Zealand’s publishers are inundated with international brand-name authors: Lee Child, James freaking Patterson, Paul Auster, Neil Gaiman – and given money to drive their brand-oriented book campaigns, perhaps alongside David Walliams, Andy Griffiths, and Jeff Kinney (you know those names) – it is not too surprising, maybe, that local kids book authors get the crumbs.

Where do these crumbs get us? Let’s look at the Bestsellers charts for a moment: it would seem that our brand is birds. Every summer, the list is swamped by kiwi birds of all varieties. Some are on waka, some are little, some are adventure-seeking, but no matter what, they sell. Some are self-published, coloured by hand, rhymed by rhymezone.com. Yet tourists who take a book home for each grandchild will buy them. I don’t think I’ve seen a chart without The Little Kiwi Goes to Bed on it (by Bob Darroch, in case you didn’t know).

These books have their place – my youngest adores The Little Kiwi and I am not knocking those books, but why don’t we see every picture book written by Juliette MacIver, by Sally Sutton, by Kyle Mewburn, by Donovan Bixley – every novel by Kate De Goldi, by David Hill, by Mandy Hager, by Fleur Beale go on the charts and stay there? And for heaven’s sake, everything published by Gecko Press?

We’ve established already that they get the crumbs of the marketing budget – and even if they are self-motivated or sure enough of their genius to shout, they are competing with those big brand authors. But here are a few reasons that I think they deserve better, which fed the decision that Jane Arthur and I made to create The Sapling.

And yet the only category of books that remains steady in the Nielsen sales charts right now is children’s books. In fact it was up 8% on the previous year in April 2017. There are a few reasons for this. One is that children’s love of reading is at an all-time high: a recent study in the UK of 42,000 kids found that more than three quarters of primary school children (77.6%) enjoy reading. Another is that not only children read children’s books – this is particularly true of the YA market. Also, a well-formed picture book is an experience you can only enjoy on paper.

So when people are wondering what children’s books to buy, we want people to read about books that will enrich, engage, entertain and comfort children. We want them to understand the skill that goes into creating a children’s book. We want them to realise that illustrators are artists too – those poor illustrators that get literally one line in most picture book reviews.

We also want festivals to understand that people want to know about children’s authors: they want to find new voices, as well as revelling in the old. Donovan Bixley was at the Auckland Writers Festival just for the schools sessions – why did he not have a main event? He’s a natural performer who has illustrated or written and illustrated over 100 books. One of The Sapling’s longer term plans is to create a festival of children’s literature – including international guests.

The Sapling is a passion project, run by myself and Jane Arthur in our spare time. These are stolen hours from our family and sleep (my output is around 12-14 hours a week, Jane estimates the same), but we are making this thing happen: and how.

The reaction has been a blanket of awesome. I went to the Storylines Margaret Mahy Day Awards and had people I didn’t know coming and thanking me for being part of the creation of The Sapling, to the point that I wanted to retreat into the dark corner where editors belong. We have had some truly wonderful children’s authors write for us: Kate De Goldi, Mandy Hager, Tessa Duder, Gavin Bishop, to name a very few.

We do need more visitors though. We want all of our pieces to have 800 readers, like Giselle Clarkson’s meditation on the place of avocado in our current house-buying market. And, although we attract over 1300 impressions per article post on Facebook, we experience a dip onsapling the weekend, just when people have time to read our longer pieces. We now have over 80 articles for readers to enjoy – reviews, interviews, essays – all about children’s books, their authors and illustrators and their front-line soldiers, the school librarians (probably my favourite monthly feature).

We began with $15,000 of Creative NZ funding, and we are now in the process of becoming a charitable trust, allowing us to apply for funding from other grants. We’ll also continue a little bit of advertising in regular columns on the site. While we crowdfunded initially – to the tune of $12000 – to get us through the first year, we are hoping not to need this input again. We are so grateful to our funders, and we’d like to assure them they have helped to build something that will last.

The shortlist for the 2017 New Zealand Book Awards for Children and Young Adults was announced this morning. These are the books judged the best of the best:

That’s Not a Hippopotamus! by Juliette MacIver, illustrated by Sarah Davis, (Gecko Press)

The Singing Dolphin/Te Aihe i Waiata by Mere Whaanga (Scholastic)

Kiwis at War 1916: Dig for victory by David Hair (Scholastic)

Jack and Charlie: Boys of the bush by Josh James Marcotte and Jack Marcotte (Puffin)

The Cuckoo and the Warbler by Kennedy Warne, illustrated by Heather Hunt (Potton & Burton)

The Genius of Bugs by Simon Pollard (Te Papa Press)

Torty and the Soldier by Jennifer Beck, illustrated by Fifi Colston (Scholastic)

If I Was a Banana illustrated by Kieran Rynhart (Gecko Press)

Snark: Being a true history of the expedition that discovered the Snark and the Jabberwock . . . and its tragic aftermath  illustrated and written by David Elliot (Otago University Press)

The Discombobulation of Summer Rain by Julie Lamb (Submarine)