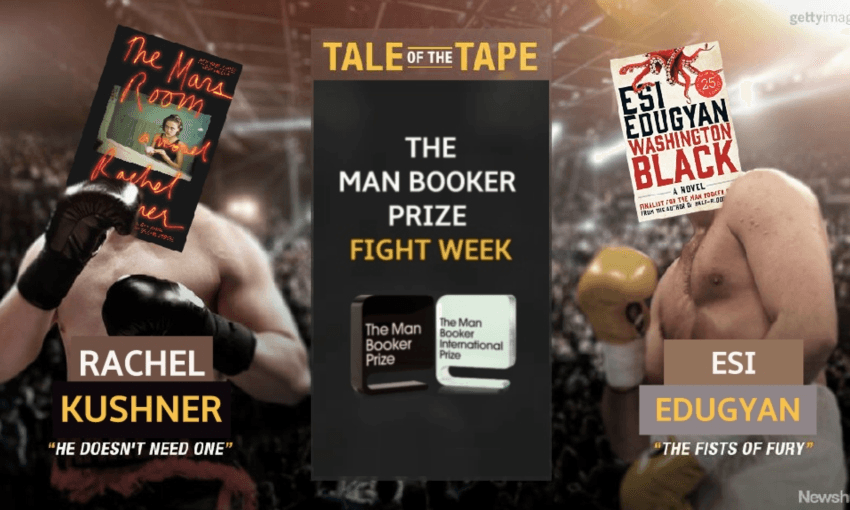 By Brannavan Gnanalingam
Guest writer
Made possible by

The 2019 Man Booker prize is announced next week. Brannavan Gnanalingam reviews two of the shortlisted novels, Washington Black by Esi Edugyan and The Mars Room by Rachel Kushner.

This year’s Bookers shortlist contained a few surprises – including the notable omission of the brilliant Sally Rooney longlister Normal People. There has been talk about whether the Man Group will continue its sponsorship, there is the continued tedious fluttering about the inclusion of American writers, and this year has included books that are far from the usual Booker fare: e.g. long-form poems and comic books.

Shortlisters Esi Edugyan and Rachel Kushner are however fairly traditional shortlisters (Kushner’s ‘dangerous’ Americanness aside) and they are no strangers to awards. Kushner was a finalist for the National Book Awards with Flamethrowers while Edugyan was shortlisted for the Booker with Half-Blood Blues, a book which takes on both jazz and the Holocaust. Both books engage deeply with contemporary issues – despite Edugyan’s novel being set in the 1830s – and carry a weighty political urgency to them.

Canadian writer Edugyan examines another of history’s most horrific events with her latest Washington Black. The book opens with the eponymous Washington Black witnessing the horrors of the slave trade on Barbados. The book is a welcome antidote to the recent back-patting focus on Britain’s abolition movement. The book’s first chapter pulls no punches at what the British did for so long, as Black and his protector Big Kit scrape through on the plantation.

The book however shifts when Black attracts the attention of the new owner’s moody younger brother, Titch. Titch is building an aerial machine and thinks the young Black would be the perfect counterweight. He yanks Black away from the fields and gets Black to help with the machine. From there, the novel shifts into a full-blown adventure novel, where Black ends up around the world – trekking the wilds of the Arctic, falling in love with a half-Solomon Islander, discussing aquariums in London.

Despite its globe-trotting narrative, in some respects Washington Black has a similar structure to Dickens’ Oliver Twist. Like Dickens’ protagonist, Black is an orphan with bleak life prospects, but who gets taken under the wing by someone armed with dubious and self-interested kindness. From there, the orphan’s life goes in all sorts of other unexpected directions. Coincidences abound. And there’s some sense of closure at Newgate Prison (although Edugyan tacks on a very potent coda).

Washington Black, similar to Tina Makereti’s magnificent The Imaginary Lives of James Pōneke, creates a world in which her young protagonist casts a beady eye back at the British. The books subvert the 19th century adventure novel, by placing their marginalised protagonists as the heroes, as the ones with the derring-do and the ones traversing the globe. Rather than colonising the places they go, they are trying everything to avoid being categorised.

However, avoiding categorisation is an impossible task. The way they view the world is structured by how they are continually being defined. Learning the rules still means they are always outsiders, never insiders. There’s a real sense of hopelessness in Washington Black’s travels – what can home be given his circumstances. Yet, for their lack of power, Edugyan creates a potent narrative: Washington Black existed, despite the power structures that did everything to crush him.

The book makes it clear that Black is clearly black. Teju Cole critiqued the concept of flâneurism by suggesting marginalised people don’t get the permission/luxury to be able to wander around a city. Edugyan effectively used this concept within the way she structured her adventure novel. Washington isn’t able to wander freely, as other 19th Century adventure novel protagonists are able to do – he is too defined by being black for that to be able to happen. The book is set after the Enlightenment and at the tail-end of the British slave trade, but just before the rise of social Darwinism and spread of Britain’s colonial empire. Micro-aggressions and powerlessness are daily issues to navigate, often with severe consequences (such as an order to fetch a sandwich).

Life-changing violence could come from anywhere and it frequently does. Washington finds himself stalked by a Scotsman, Willard, who is on the hunt for escaped slaves. Separately, when Washington has inspired ideas, he knows he isn’t going to get the credit for them. Even among the people who treat him ‘kindly’ like the professed abolitionist Titch, they are in it for themselves. Titch for example chooses to help Black on account of his physical attributes, i.e. his body weight makes him the perfect counterweight. For all his talk on abolitionism, he uses the same judgment process as the slavetraders. For all of his liberal pieties, he was very light on actions.

The novel moves at some clip. If anything – and this is a minor criticism – the novel feels a touch too edited. Edugyan is clearly capable of writing a page-turning adventure story. However, some of the moments that really stand out are the moments of stillness (and oddness): strained conversations between Black and Tanna, underwater descriptions, the descriptions of Norfolk, Virginia. But these moments largely seem to have been co-opted for the sake of moving the narrative along. There’s a strange (and deliberate) flatness to the story: almost as if the adventures that befall Washington are as everyday as the life he left behind. Yet there is nothing ordinary about what people like Washington Black had to go through, whether it was travelling the world, or simply surviving as a slave.

Simply surviving is also a key theme of Rachel Kushner’s The Mars Room. The book is loosely structured around young mother Romy Hall. She has been sentenced to two life sentences after she killed her stalker. She is in a maximum-security prison and trying to figure out how to get in touch with her young son. More immediately, she has to survive in the brutal prison environment, with its shifting alliances and capricious bureaucracy.

Romy is clearly a victim of her circumstances, and there’s a real tragedy in the way the criminal justice system completely dehumanises the people caught up in it. Yes, she may have killed a man, but her victim was an incessant stalker. Kushner shows how her circumstances meant she had no chance within the system. She couldn’t afford a lawyer so ended up with an overworked and cynical public defender. The lawyer chose not to bring up the victim’s behaviour at her hearing, so the jury, assuming she was a cold-blooded killer, simply convicted her with full force.

The novel is an unflinching and bleak take on modern America. Kushner’s characters are structured by political processes and bureaucratic frameworks that suppress any sense of freedom. Those with the power have freedom to do whatever they want – yet are profligate with it and instead get wrapped up in anxiety about those who are denied freedom. Kushner makes it clear who the victims are in The Mars Room: the characters who are economically deprived, black or trans (or a combination of all three). There is desperation for money or love, but none seem possible when everyone is out for themselves. Institutional power snatches away the powerlessness’ moments of joy or freedom. The rules are clearly designed to deny help to those with the least amount of power in the system.

While Kushner makes use of Thoreau’s and Ted Kaczynski’s writing throughout – the impossibility of individuals to find themselves in such a system – there’s a strong influence of Dostoyevsky on the narrative. That’s not unsurprising given the novel’s focus on crime and punishment, the crushing banality of prison life, and the inability to obtain redemption. The novel sets up a real tension between rationalism and irrationalism, the powerful are increasingly irrational, whereas the rational, the ones just trying to survive, get punished.

Kushner clearly has done her research into prison life and the way her characters become emotionally and physically constrained. There is considerable detail into the banalities of their lives – some of it illuminating and horrifying. In the process, she has given some of her characters potent backstories. Minor sub-characters’ narratives are thrown in to expand Kushner’s central ideas about freedom and how everyday people are trapped by their circumstances. At points, it does feel like Kushner is too reliant on her research to stand in as a proxy for a narrative or characterisation.

Putting that aside, The Mars Room is effective and a very moving account of forgotten lives. The constant dehumanising of prisoners has obvious implications on the prisoners (and the guards) and the way society scapegoats its most vulnerable. For the prisoners, they’re trapped on account of a mistake they may have made – in some cases, when they were teenagers. For the non-prisoners, they end up trapped in a lifestyle because they believe it’s the only way they’ll be able to get by – that doesn’t necessarily lead to the most empathetic approach to fellow human beings. True moments of escape, irrationality, freedom are only ever illusory. How can we interact with each other, if we don’t get space to be ourselves? Kushner’s characters are merely scrambling along life until the moment they get flushed away without a second thought.