The shitfight that ensued over a proposal to sell office space in Wellington’s Central Library saw anxieties over public space and social infrastructure converge, writes Salene Schloffel-Armstrong, an urban geographer who researches the place of public libraries in cities.

Wellington Central Library has been at the centre of an increasingly bitter dispute in recent weeks, after the city council voted to sell off part of the library building as office space. In response to loud and wide condemnation, several councillors had a change of heart and the library was given a reprieve.

Why was the debate over a small part of this single library building – whether the current structure or an imagined future building – so polarising and emotive?

The way we talk about public libraries in New Zealand has shifted over the last few years, with a growing focus on the large number of services libraries offer, and the wide-reaching social benefits of these spaces. In the 1990s we feared that a widespread digitisation of resources would lead to the demise of the library building. That has not come to pass – instead we see a resurgence in attention towards the social elements of physical libraries. The range of services taking place in library branches – including IT lessons for the elderly, toddler rhyme time sessions, book clubs for unhoused individuals – are now more widely known and supported. However, public attitudes towards libraries are still polarised, with significant numbers of people in New Zealand still adamant that libraries are obsolete spaces and services that are a drain on public funds. Yet the vehement defence of libraries appears to be as loud as – or louder than – the dissent. Around the world, when a library is threatened, highly visible localised campaigns spring up: see the Save Our Libraries movement that pushed back hard in 2018 when the University of Auckland moved to close some of its specialist libraries.

This changing landscape of debate has altered the frontiers of defence for supporters of public library systems. After the Wellington council vote on February 18, instead of arguing full stop for the existence of a library building, the debate shifted to focus on how the “publicness” of the public library is central to its value. The proposition to sell off a portion of space in the existing library building was framed by mayor Andy Foster as a necessary cost-cutting measure that would allow the central library to reopen more quickly. Although the mayor denied this would be privatising a public asset, a number of city councillors were quick to note that is precisely what it would be. The response to this proposal – after the library’s privatisation was voted down by the same council in July last year – has been one of widespread outrage and passionate defence of the public ownership of the central library.

Libraries have been widely described as “the last truly public space” in contemporary cities. The library’s position as a rare non-commercial site in the city gives people equitable access to resources, but also helps with basic needs like using a bathroom, or having a place to shelter from the elements. As a place that is expressly designed to serve its wider community, the library offers services to library users regardless of their financial situation, citizenship or place of residence. As noted by geographer Kurt Iveson, libraries allow “a diversity of users, and a diversity of uses” within one space. In the library everyone can be a library user, and take part in public life. This is partially due to its non-commercial focus and continued funding by democratically elected officials (in New Zealand at least) who answer to a wider public.

It must be acknowledged, however, that library systems have direct and ongoing legacies based in colonial projects around education, and an idealised vision of them as neutral and completely equitable spaces is not particularly truthful, nor useful. Although the actual enactment of inclusion varies depending on the library and specific interactions with staff, many New Zealand libraries have gone out of their way to offer services to marginal and vulnerable communities. More broadly, in the debate about the place of libraries in the city, their focus on collective resources, shared space and free access has made them a strong symbol of resistance against the encroachment of private property and individualised resources. With the library feeling like the last bastion of public space against the overwhelming logic of private, individual and corporate ownership, attempts to bring commercial interests into the library space make many people – justifiably – nervous.

In my opinion, the debate around the library in Wellington is symbolic of larger ideological battles over private property and social service provision. However, this debate is also fundamentally about a specific building. To understand how the two intersect, we must look to the global and national context. 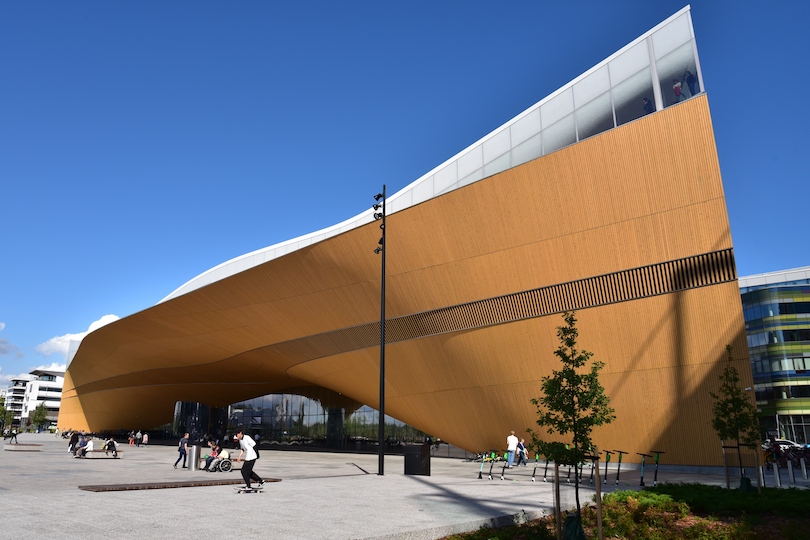 Although many library systems internationally are fighting for continued funding, a trend for new “flagship” library buildings has grown in recent decades as well. These flagship buildings are replacements of existing central city library buildings, reflecting the tenets of what American anthropologist Shannon Mattern called the third wave of library design. These libraries lend books, but they’re also public meeting places, access points for various social services and extended cafe zones, as well as architectural tourist attractions in their own right. Increasingly, these flagship libraries are acting as what Mattern calls “downtown anchors” – central pieces in urban redevelopment projects. This trend of flagship library construction can be clearly seen across Scandinavia, with new library complexes popping up in Helsinki, Oslo and Aarhus over the last 20 years.

These mega library projects are also often key within plans to revitalise city identities, and become highly symbolic fixtures in urban space. For example, Helsinki’s new central library Oodi opened in 2018 to commemorate the city’s anniversary. Oodi is described on its website as “a living meeting place”, “part of a cultural and media hub” that is “right at the heart of Helsinki”. The identity of contemporary Helsinki is closely tied to this new library centre.

Closer to home, we can of course look to Tūranga, the newly opened central library in Christchurch.

Tūranga’s construction was undertaken as an anchor project of the city rebuild. Although Tūranga was not free from these polarising debates over library funding, most of the criticism prior to its opening has disappeared, giving way to widespread community support of the building and its services. Tūranga has been a huge success as a flagship, with library visits far higher than predicted, and has also won several international architecture and design awards.

Flagship libraries have become increasingly symbolic, both as bastions of public space in the city, and as specific iterations of unique city identities. This loads yet more pressure onto debates like Wellington just had, with Tūranga representing to different factions either a direction to follow, or a large investment to avoid. However, Wellington is also currently in an infrastructural crisis, with a number of key city systems breaking down and simultaneously requiring massive investment. As noted by city councillors Tamatha Paul and Rebecca Matthews, in funding debates the tangible reality of wastewater and other forms of hard infrastructure have been weaponised to argue against the importance of other services. A binary is being set up that disregards the importance of soft or social forms of infrastructure within urban areas. The benefits of libraries and what they allow space for often only become tangible after they are gone. This has been seen widely in the United Kingdom where in 2018 alone, nearly 130 libraries were either closed or passed from their local government to another organisation in processes of privatisation or what’s been called “volunteerisation”. Result: shrinking collections of books, fewer physical library branches open to serve their communities, and severely reduced hours of access for those that remain open.

The introduction of private interests into these spaces reframes public services as financial liabilities rather than collective assets to be maintained. Even these partial attempts to privatise public libraries in New Zealand may start the slide towards reduced access to books, services and community space, for everyone.

As noted on Twitter by Rebecca Kiddle, by losing public ownership over part of the library building, the democratic processes that dictate how that space is used are lost. Those collective rights over particular sites in the city are increasingly hard to regain. A capital city that has functioning hard infrastructure, but no public and social spaces for its communities, does not fit my definition of a successful urban centre. To maintain a central library as a public asset provides a space for all Wellington residents to be part of the city fabric, regardless of their resources. As we rebuild our cities in the wake of Covid-19, I hope spaces for community – spaces that combat social isolation, and that are inclusive to entire publics – would be considered as a priority, not as an afterthought.