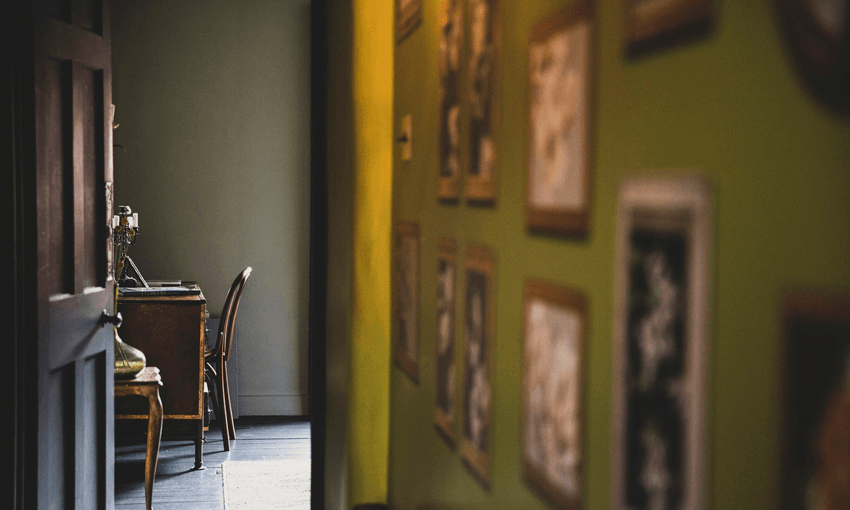 It’s the perfect time to write your own locked-room murder mystery – easy, right?

How do I feel? Sick of vacuuming that’s for sure. Sick of ignoring the voice that says, “you can’t see the dust anyway so why bother?”

Since I went into self-isolation I’ve been teaching my crime novel course online so no surprise that I started thinking what a good opportunity the lockdown was for someone to write a novel a la Agatha Christie who excelled at the dead-body-in-the-locked-library crime novel. And writing a crime novel’s easy, right?

So, you’ve got this bubble of people all in the same house. Why? Well maybe they’re family, maybe they’re flatmates, whatever – among them is one they all hate. I haven’t worked out why, if they all hate him, he’s in their bubble, but that’s a minor detail. Maybe he’s rich and they all want some, maybe there are other holds he has over them, whatever, they’re all there. The guy they all hate has his own room in which he works (what at? Don’t look at me). The curtains are drawn, door locked except when he come out to use the bathroom or get himself some food which he steals from other people’s food in the fridge.

Then one of the others gets a phone call. The caller has been ringing and ringing the guy in the locked room but he’s not answering. The bubble members knock on his door and call out. No answer. They try the door. Yes, it’s locked. They call out, bang on the door. Still no answer. No extra key so they decide, nothing for it, they’ll have to break into the room. They use a hammer or a spade and they break the lock, open the door, and there is the guy lying on the floor, dead (don’t know how, haven’t worked it out yet).

If Agatha Christie’s Hercule Poiret was still around, he’d be using his little grey cells, if Ngaio Marsh’s Chief Inspector Roderick Alleyn was called in he’d be doing his inscrutable well-bred upper-class sleuth thing. If it was the Raymond Chandler’s private eye with the cynical, hard, elliptical way of speaking – known at the time as the American style and held up as a model of that kind of crime novel, never mind that it was sexist, racist and homophobic. If it was that kind of sleuth, you’d have to take out all those elements and Robert B Parker’s already done that.

Now we have Rebus and Jack Reacher, we have Sam Sheppard, Vanda Symons’ detective. Pretty sure she could solve this one.

So there’s your plot. You know it’s a locked room mystery but it’s your call whether it’s a Private Eye story, Forensic Investigation, Police Procedural (maybe one of the bubble members is a cop?), or whether one of the occupants in the house, an amateur, solves it. Your call what the mixture of ethnicities is – Maori, Pakeha, Chinese, Indian? Maybe someone from Turkey or Iran?

Names, ages, gender, work situations, relationships, the way they look, the way they dress, the way they speak – can they cook? Is the house in a city, a town or the country? By a lake? On a hill? At a marae? You work out how everyone reacts in this situation. Oh, I nearly forgot – you have to decide who’s the murderer and how s/he does it.

Piece of cake. Five minutes should see that off.

You need to throw in the dramatic elements: hate, love, sex, revenge, jealousy and desire, racist/sexist attitudes and dole them out among the members of the fictional bubble. A lot of secrets will have to come out and there would need to be some arguments and drama apart from the murder and its investigation. It should have the kind of elements which have the reader asking why the hell anyone would choose to live with any of them in the same bubble, let alone the one they all hate. Your explanation should at least stand up for a few chapters. And the good (eg: the detective, whether an amateur or a cop) will have to triumph over the bad (eg: the murderer and any accomplices). If there’s a happy ending or the promise of one, that’d be good.

Oh, and there has to be some red herrings so the reader is led up some wrong alleys but no worries, writing a crime novel’s easy, right? Rip it off in a week or two.

Title? You could do a Dylan and call it Bubble Bubble Toil and Trouble?

Five strawberries, only green tomatoes on the wild one.