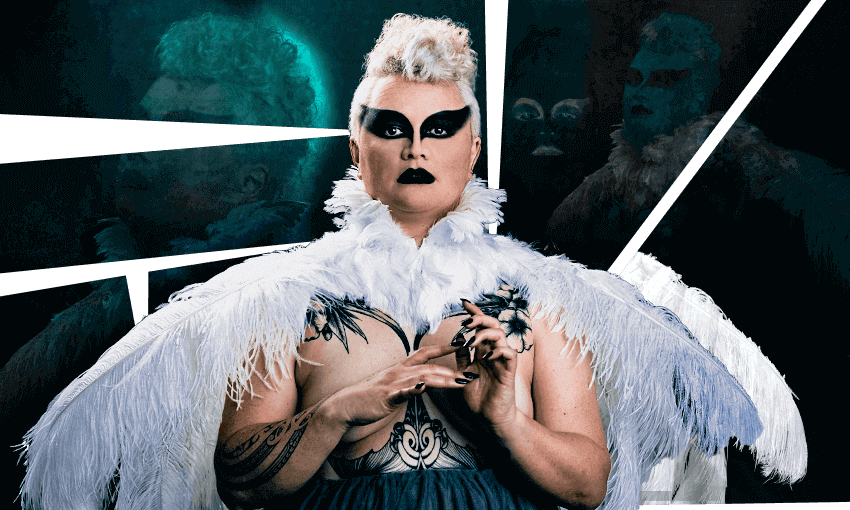 By essa may ranapiri
Guest writer
Made possible by

In this singular new book, essa may ranapiri discovers a sense of space and peace – and some properly hot gay sex, for once.

I have heard many versions of this story, of Kurangaituku and Hatupatu, or as it’s probably more well known, Hatupatu and the Bird-Woman. The first time I heard it, it was the story of a wicked Bird-Woman trying to kill the boy Hatupatu. The Bird-Woman was terrifying and ugly; a threat who must be put down like an untamed dog let loose in the streets. The next version I read, many years later, was by Ngahuia Te Awekotuku. This is the one that focuses on Kurangaituku’s experiences, brings us into her world, describes the wrong that is done to her. Hatupatu is an arrogant and destructive person who kills her manu. Kills the creatures that she is kaitiaki of after she lets him into her world. In this version of the story Kurangaituku is not tricked to her death but uses the steam from the boiling mud as a cover. She is of course aware of the land she lives in, some boy couldn’t outsmart her in that way. She comes back and surprises Hatupatu and enacts utu, creates a balance, a song for a song and pulls out his tongue. A human voice taken for his crimes.

The next time I come across Kurangaituku is in the journal Landfall. In a poem by Stacey Teague that depicts a school performance where the bird-woman meets her end on the “lacquered brown floors of a school hall”. This poem feels like mourning, feels like a response to the ways in which we are taught that resistance will be met with violence. The first time I read it, I cried and it was a deep cry, not just for Kura but for everything that has happened since 1769. It was this poem that prompted me to pick up my metaphorical pen (take out my typewriter) and write my own work about the bird-woman. In my poem she has avoided death (as in Te Awekotuku’s work) and made it to the Mediterranean where she is teaching the sirens of the Odyssey how to lure men to their deaths with song. What a tale of revenge, what would Kurangaituku be better at than bringing down the patriarchy?

I am no stranger to Kurangaituku, and I feel like a lot of you reading this aren’t strangers either. In a way all of us queer wāhine, wāhine takatāpui, have felt some form of shelter under the feathered arms of this bird-woman, who is ready to kill for us if need be. I say this because reading Kurangaituku by Whiti Hereaka, especially through a lens of my experience as a transgender wahine, felt like coming home.

The book, told from Kura’s perspective in the first person, is split into three parts. To reflect the perspective of the main character it is not structured in a linear fashion. On one side working towards the centre is Ruru which follows Kurangaituku’s adventures in Rarohenga, and on the other side is Miromiro which describes her origins and relationship with Hatupatu. The third part and the centre of the book is Hatupatu and the Bird-woman, which is a retelling of the traditional story. Regardless of how you read it, you always end up at that retelling, that point that changed her life forever. And both sides that you can start with always begin in Te Kore, the space of potential. For Ruru this space is just post-death, and for Miromiro this space is pre-birth. But the narrator, Kurangaituku herself, is always aware of the whole stretch of time that spirals out to be her life. There is a sense that she is always looking back to these events even if they haven’t happened yet.

Kurangaituku allowed me to see myself within te ao Māori in a way I hadn’t before. Kurangaituku is unambiguously queer and perhaps ambiguously a woman and definitely a story-teller. There are so many scenes across this book that set a fire in me. The first being that of the eruption of Taupō, “An eruption so tremendous it colours the sky on the other side of the planet, and rips apart the centre of this island … The crater that is left is the shape of a human heart, and will eventually fill with water …”

This scene is explicitly manipulated and slowed down and this moment is stretched out in some of the most electric prose I’ve ever read. “The column is made of ash, pumice and lava. It is bigger than any of the buildings that you have engineered, or will engineer. It glows from the heat of the earth and expands with the gases that are created by the heat.”

The slowing-down of the story becomes its own dramatic turn. “It is a trick of our imaginations – that because we’ve slowed down time, we’ve allowed some life to escape. We have written in a space between the shock wave and the fire cloud that really didn’t exist. If their bodies had survived the boom, if their organs had not been liquified, if their lungs survived to take their next breath, it would have been one of fire and poisonous gas … It is impossible not to admire a force such as that.” Our stories that try to save, can only observe, can only record, can only invent another path but not enact it.

Before this moment in the text, Kurangaituku has been a bird, living amongst other birds. It is here, with the traumatic explosion of Taupō, that this changes. She begins a transition in the depths of Papatūānuku. Kurangaituku is encased in earth, where she struggles like a bird in an egg. Here she describes the muffled prayer of the baby bird before it hatches. “ … this place is too small for me. Body folded, wet with albumen, yolk sack absorbed. Egg tooth pierces the air cell / and I breathe for the first time – hā.” This reminds me of the internet slang that compares a trans person who isn’t yet aware they’re trans to an egg. What egg tooth broke me out of that stage of my life? What egg tooth gave me freedom? I think honestly, the word takatāpui was my egg tooth. Having a space in te ao Māori has allowed me to be honest and open about who I am.

Throughout the book, Kurangaituku is further shaped by the perceptions and stories of the Song Makers (people), and within relationships is defined even further by what the other person sees. This is so often the case for trans people, having to perform and shift to fit the perception of their partner or their family who have calcified a version of who they are that can be extremely hard to break from, like the crust of earth that Kura must break through. This shaping by others can be incredibly traumatic. Like the experience of Kura with Hatupatu, who sees her as monster and sex object at once, which really is some of the most relatable shit for trans folk.

There is another part of the book I want to speak to that breathed life into me; another place where Kurangaituku is shaped by another. This is in her relationship with Hine-nui-te-pō. Also I just want to say this book has some of the hottest gay sex I’ve ever read, turns out when shit isn’t written by straight men, lesbian love can flourish.

This exchange, full of humour and lust as Kura comes to terms with who Hine-nui-te-pō is: “She ran her tongue along my clavicle and bit my neck. Is this how you greet them, your children? Hine laughed. ‘I greet my children with love, love a mother has for their child. But I am still a woman and you, Kura, are not my child.’’’ Their relationship is tender and beautiful and she shapes Kura in her own image, Kura becoming likened to atua. The ultimate mana wāhine power couple. What I want to say about this is how important it is that we are seen and realised by those that love us, and through that perception grow. Kura and Hine’s relationship is a lot more fraught than the parts I’m focusing on, and it does end up succumbing to the trauma both wāhine have been through. But the glowing moments of that relationship brought me so much peace. The atuatanga of takatāpui, of that egg tooth breaking through into the world of the light, is everything to me in this pukapuka and I am so thankful to Whiti and Kurangaituku for realising this.

Kurangaituku stands in front of the mirror and for once likes what she sees, her body shifting before her eyes. She is an ocean of love and life and a lake the shape of a heart after it has exploded.