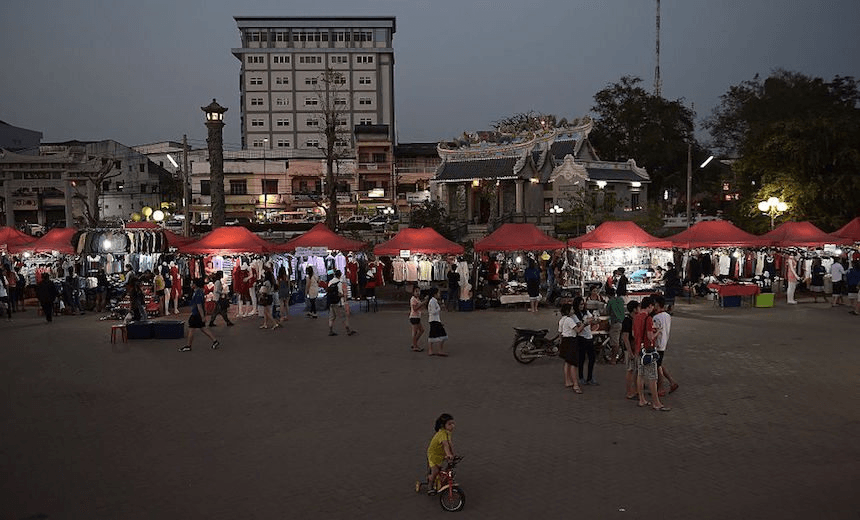 ‘We’re thinking a lot about refugees these days’: the story of the famous writer who arrived in New Zealand as a refugee and a nobody

By Adrienne Jansen
Guest writer
Made possible by

Adrienne Jansen tells about the night she was asked to come to her local police station to deal with a refugee picked up on a drink-driving charge.

It was the last night of a university writing course.

Twelve of us sat around and read our work aloud and talked politely about publishing opportunities. I went home. I was hardly in the door when I got a call from our local police station. They had a Lao man in custody and they needed a translator.

At that time, refugee resettlement and teaching ESOL occupied most of my life. I was often asked to find translators. I knew this Lao man, Saneha, and I knew he didn’t need an interpreter – his English was good enough. So I went to the police station myself.

Saneha had come to New Zealand as a refugee from Laos. That night he had been picked up on a drink-driving charge. It was his first encounter with the New Zealand police. He was very afraid. He was in a small cell and he was shouting. Shouting how he was a writer and no one here understood him.

I had known that Saneha was a writer. What I hadn’t realised was how well-known he was – his poetry was known across numbers of refugee camps, and in other countries. But I hadn’t seen him as a writer. I had never talked to him about writing. For the first time I was face-to-face – emotionally, not intellectually – with the profound loss that a writer can experience living in a country where they don’t speak the language.

That night Saneha was under the intense pressure of being picked up by foreign police (with no idea what might happen), being drunk, and being very afraid. Under that pressure, it all came out – his anguish at being an exile and, above all, at being a writer who no one recognised or understood. Anguish was the right word for it.

We’re thinking a lot about refugees these days – not only the Syrians, but also the Colombians, the Burmese, the Afghans, the Iraqis – and about changing countries, the lost and found of it. In particular, I’ve been thinking about the loss of language – it’s not just about communication, it’s about power, and identity.

Saneha and I started to work together as writers. He had written a long poem about being in exile, and we agreed to make an English version together. Over weeks he talked me through it, stanza by stanza. That English version – which turned out to be extraordinarily close to the Lao version, in spite of our language limitations – became widely-read. It was distributed around the factory where Saneha worked, around his soccer club, it travelled to the US, UK and Australia. He and I read both Lao and English versions at a national conference on mental health.

Out of loss, he had clawed something back.

Exiled by the Storm

Addressed to Prakerine, a woman still in Laos, it tells of the war in Laos, the escape across the Mekong River into Thailand, and the life in exile.

Prakerine, how can I send these words,

through the brown of your photo,

through high trees, to the point

where you sit, holding your spirit, still,

in your hands, and perhaps, holding mine.

Are you asking the question,

what place am I in,

and what was the journey?

Here are my words.

I write them for Laos, and for you.

Once, Laos, you were

both kingdom and king.

Your rivers flowed smoothly, in the market

spilling out from full baskets.

And always the sun

lay on the water

and there was a stillness

in the heart of the lake.

But now the world has spun round

A wave of the sea has caught you,

has tossed you up high,

and will throw you down,

break you, and break you again.

whose faint petals turn into steel,

are ground to machines.

the sound of the sword

slicing the head from the neck.

Now I remember the sight of the head

I remember that hearing, that seeing,

and my spirit leaving my flesh.

And not only I, but all of my people

and fear leapt at them,

They could not speak, not move,

their spirits were gone,

their bodies were hard as stone.

Each has been cut from the other,

girl from her lover,

child from the mother,

all have been ripped from their homeland.

Their hearts are burnt black by the fire,

tears crack on their faces.

Suddenly anger tears through me.

My enemy’s face, the face of the beast

is before me. I want to go back,

grab the gun, and kill the hyena.

I want to brandish the knife,

slice through the heart of its heart

and pour in the salt,

for there is no justice in him.

At midnight, the Mekong River

is needles of ice.

When you swim, it will turn you

that way, or this way,

or spin you around.

on the water behind you.

Then you catch a small cry,

Help me, my friend.

There’s no chance. You can’t help,

it’s too late. The current is strong,

it’s dragging your body away.

You can’t reach him.

You fall through the water,

and the river pours in

Oh Mekong, once you were friend,

and in you, the Lao and the Thai people

But now you have changed.

The open palm of your hand

has become the hard back of your fist.

Now there are ten years between us.

Have you walked to the temple for marriage?

Is there a man you have loved?

To me, it is just yesterday

that you and I planted the rice

in the field together, not caring

for rain, for the cold,

for the pain in the back,

not fearing the dangerous shadows,

because we stood close, you and I.

Now I am alone, with no home,

no homeland, no friend,

my words are worth nothing,

and only your photo, to bring me

that world, and that kingdom.

One day, if the wheel turns over,

one day, if the wind swings about,

blows in the new season,

I will come back

to Vientiane, and to you.