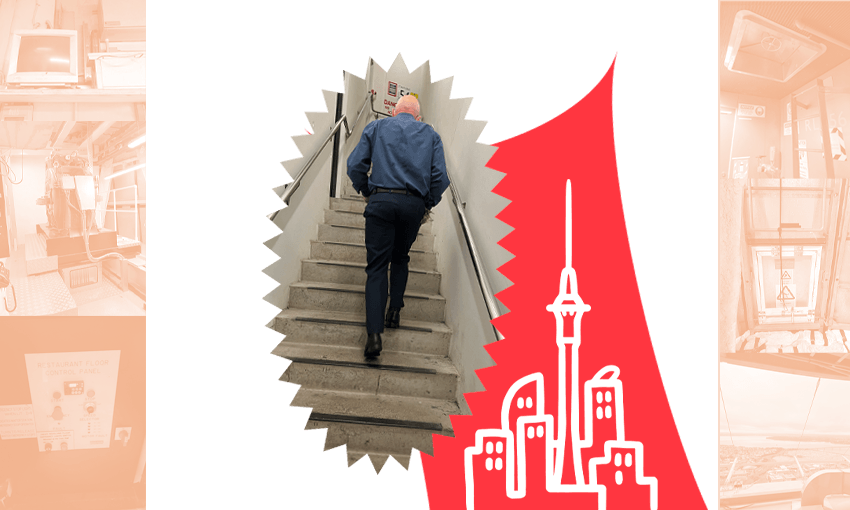 Beyond The Sugar Club and the rotating restaurant lies a hidden world unable to be explored by the public. We’re going there.

“You’ll be alright,” says Bruce Stewart. “We’re just going to have a look out this door.” Sky City’s senior facilities supervisor – a generic title given to him, he says, so “they can park me wherever they like” – is standing near the top of the claustrophobic staircase inside Auckland’s Sky Tower, and he is completely unbothered.

He’s already taken me up a rattling service lift for 50-odd flights, then toured me around some of the building’s more unusual spaces, showing off service areas, switchboards and sprinkler pipes, including surprisingly ancient computing terminals and internal structural frames that look like Ghostbusters gloop is growing on them.

Bored of that, Stewart decides it’s time to show me something special. Via the Sky Tower’s internal staircase, we’ve climbed above The Sugar Club, the rotating restaurant Orbit 360, the Sky Walk and the public viewing platform, and into an area off-limits to the general public, one only visited by those in the know.

Stewart’s one of those. Using an intercom next to the door, he calls security, warns them of what we’re about to do, then unlocks a door that leads to somewhere no one normally gets to go when they purchase an all-access pass to Auckland’s tallest building.

Yes, nearly 60 storeys up, on a cold, windy and wet midweek day, we’re going outside.

A chilly breeze smacks me in the face as I attempt to peer past Stewart and take in the uninterrupted views of Tāmaki Makaurau available outside that door. They are spectacular, better than from the top of Mt Eden on a sunny day, and surely the best place to take in the wonder of Aotearoa’s biggest city.

It’s also a great place to ponder your own mortality. After peeking at the view, I realise something else. On this particular outdoor level there are no barriers, no guard rails, no fences. If you’re not careful when you step outside that door, there’s nothing to stop you free falling to the ground and face-planting into the asphalt below.

“You make one mistake out there and it’s over and out,” cautions Stewart. “You don’t bounce.”

That’s when I began sweating. Stewart, a man who always seems like he’s in a hurry, attempts to rush me through the door and out onto the viewing platform to get me past my phobia. “There’s nothing unsafe,” he says. But my legs are frozen and my whitened knuckles won’t let go of the staircase rail. I cannot move.

“Nah … nah,” I stammer. “Not keen … I’m not good with heights.” Stewart mutters: “I can see that.” His disappointment is obvious. Here, in front of an open door close to the Sky Tower’s 60th floor, this journalist found his breaking point.

Stewart does this all the time. A mountain goat in his former life, probably, he climbs the Sky Tower most days of his working week, and sometimes on weekends. When Covid restrictions shut the Sky Tower’s tourist attractions down, he would sometimes come into town to get on with his climb anyway.

He’s got his Sky Tower walk down to a fine art: just 21 minutes is all it takes for him to scale 50-odd levels, then head back down. “It depends how I feel,” he boasts, “[but] I don’t stop.” If he has time, sometimes he does it twice, like it ain’t no thing. He is, for the record, a chipper 68 years old.

Today, Stewart’s supposed to be showcasing some of the Sky Tower’s more unusual areas, telling me stories, reminiscing about the days it was built. You might have heard: the Sky Tower turns 25 years old this week, and Stewart was there from the start, working as a shift electrician for Sky City in the mid-1990s, then moving into maintenance across the whole complex.

He watched on as the Sky Tower was built. “Coming to work in the car you’d look up and you’d see stuff happening. It was growing.” Despite passing retirement age, Stewart doesn’t want to leave. “It’s vibrant. It changes. It has lots of things that you don’t expect to happen,” he says. “You’re not dreading [going into] work.”

Nowadays, if something goes wrong across the complex, Stewart’s the man people ask to sort it out. The other day, he returned from a long weekend to find water gushing over casino gaming machines first thing in the morning. “It was coming out of the sprinkler system,” he says. “It was every man to action stations – you’ve just got to deal with it.”

Across our two-hour trip, he shows me elevator rooms, fire levels, power cables, toileting pipes, kitchens, struts and access ways all out of view of the general public. In Orbit 360, he shows me the dial that ramps the speed of the restaurant’s rotation up. Somehow, I manage to resist cranking it when he’s not looking.

He also tells me stories, because he’s gathered a few over the years. One involves being invited to attempt an early version of the Sky Walk, the activity where daredevils get harnessed up and walk around the Sky Tower’s Saturn-like rings. While he was out there, he realised everyone had a perfect view inside The Sugar Club’s toilets. “There was a mad rush getting a door on to stop people looking in,” he chuckles.

Now, he’s trying to get me to go outside with him. But, in front of the door he’s propped open with his foot, all I can utter is a nervous laugh and a timid squeak. Stewart’s reply? “I’m not going to push you out. I’m not going to make you do anything you don’t want to do.”

Finally, I force my feet to move, and slowly put one in front of the other. Once I’m outside, my mind clears and I’m able to focus on the stunning views. “You don’t hear the hum of the city [up here],” says Stewart. He’s right, it’s so incredibly peaceful, blissful even.

Then he ruins it. “It’s a bloody long way down.” He seems determined to torture me. And we haven’t even got to the worst part yet.

“I want to go higher,” yells a toddler. We’ve come into the highest public viewing space, the level with those glass panels on the floor offering a stomach-churning view straight down to the pavement below. That toddler is dancing on them, then leaning his full body weight on the angled panels. Clearly, this kid doesn’t care about safety.

“I want to go even higher!” he yells again, reaching fever pitch. His mother takes him over to a Sky Tower chart and points to where we are: on the observation deck, the highest point the public is allowed to go. “There isn’t anywhere higher,” exhales his mother.

But there is. Stewart gives me a knowing look and invites me to follow him. He opens yet another door into another, narrower staircase, and leads me up. “I’m puffing like billy-o when I get to here,” says Stewart about his daily climb.

He stops. At this height, with winds averaging a minimum of 50 km/hour, it’s easy to feel the tower swaying in the wind. Again, my knuckles clutch the rail. My feet freeze to the floor. Above us is a trap door with a metallic wheel attached to it, like something out of Battlestar Galactica. Where does it go? Up inside the Sky Tower’s needle, then, if you keep going up, to an outside ladder. The top of the top.

Stewart takes this as his cue to launch into another story. In 1998, when the Sky Tower turned one, it was decorated to be lit it up to resemble a single candle. On the needle, they’d lashed a huge canvas flag to promote the anniversary. But “it was a really windy night,” he says. One of the ties had come undone. “This thing broke loose.”

At 10pm that night, Stewart and another staff member decided to venture as high as it’s possible to go up Auckland’s Sky Tower in an attempt to re-secure it. It worked – but Stewart has never told his wife about their late-night adventure. “It was really windy,” he says, looking a touch shaken for the first time in our interview. “I was [worried], but I was 25 years younger.”

Then Stewart looks at me, a glint in his eye, his confidence returned. He wants to know if I would like to join him in recreating those daring feats all those years ago. Do I want to climb the Sky Tower needle? “It’s one of the harshest environments you’ve got,” he says. “I could organise it.”

I shake my head. “I’m good,” I reply. I’m ready to return to the safety and security of solid ground.