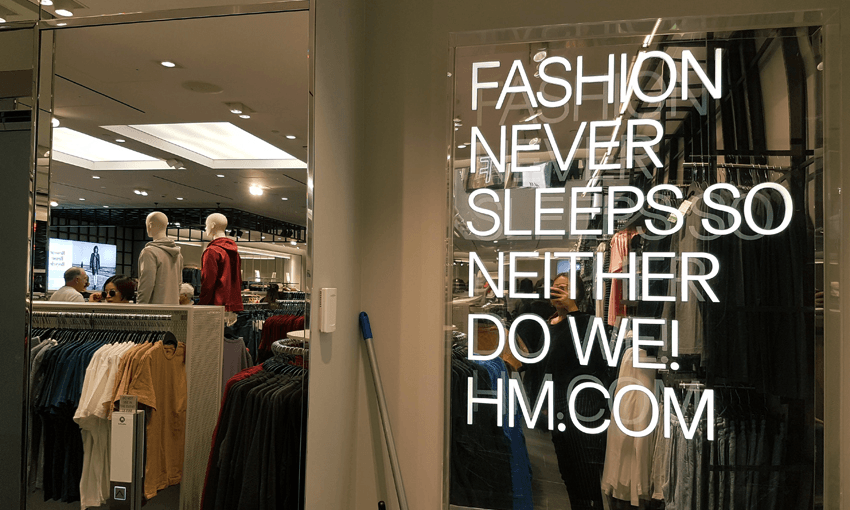 H&M’s first multi storey experience in New Zealand opened to much fanfare last week as hundreds lined up to be one of the first to get a glimpse. Jihee Junn joined the masses on Thursday morning.

Held at an offsite location in the heart of Grey Lynn, the Stolen Girlfriends Club show on Wednesday night marked the perfect midway point for this year’s New Zealand Fashion Week. Only the most stylish and coolest were privy to watch its waifish models walk down the runway in oversized belts and plaid coats. And in typical Stolen fashion, there was a strong wave of too-cool irony running through the whole affair too: black crocs (which are fashionable now, apparently) lined with a spillage of fluff, trash chic props (literally) in the form of light-up wheelie bins, and New Order-esque long sleeve shirts emblazoned with words, ‘New sincerity, Deep Irony’ – the show’s enigmatic title.

Just 12 hours later in downtown Auckland, a markedly different type of fashion event was underway as H&M prepared to open its doors to its new flagship store. Hundreds had lined up – some as early as 7am – to be one of the first to browse the Swedish brand’s expanded range of goods. The queue consisted of a motley of people from all walks of life: streetwear-clad hipsters, high school students in uniform, newbie mums with baby in tow, and stylish older ladies decked out in leopard print coats and Nike kicks. Tote bags full of H&M branded goods were set aside for the first 300 in line, containing a notebook, an umbrella, a discount card, and a reusable cup. For everyone else, there were plenty of mini cinnamon pastries to go around.

While a store opening and a fashion show are clearly two separate beasts, H&M’s flagship launch in the midst of New Zealand Fashion Week did seem strangely poignant. At H&M, it felt like fashion for the masses. At Stolen Girlfriends Club and other NZFW shows, it felt like fashion for the few. Part of that had to do with fashion week’s ‘exclusivity’, a notion which has always permeated the designer world (how many people are going to ‘get’ the idea of wheelie bins on a runway?). But a lot of it also had to do with price: a leather jacket from Stolen will set you back a neat four-figure sum, while a near identical copy from H&M will cost you just a tenth of that.

With the rise of cheap manufacturing, social media, and a middle class with modest disposable incomes, fast fashion brands like H&M, Zara, and Forever 21 have become global behemoths over the last few years. These companies parrot runway designs into similar garments to be sold sooner and cheaper, spearheading what many call the democratisation of fashion: fashion for all, not just fashion for some. Fast fashion won’t make you feel poor, dumb or alienated like a Prada or Gucci would. Its accessible price points, sizes and styles are meant to promote consumer inclusiveness, not exclusiveness.

But fast fashion’s rise certainly hasn’t come without its downsides. Accusations of plagiarism are a constant pain for H&M, whose copycat designs hurt independent artists and small fashion houses the most. There’s also the complaint that speedier, cheaper, more mass manufactured fashion waters down the artistry of the original designer, who will often spend innumerable hours honing and tinkering the look of a garment, only for it to be pinched by a Topshop or Zara mere days after its debut. Then there are the problems that come with the manufacturing of the clothes themselves: the waste, the pesticides, the terrible working conditions, and the exploitative labour practices, to name but a few. The argument goes that not only has the democratisation of fashion failed us on an ethical level, but that the whole notion is actually a myth: the masses still buy what they’re told to, just with more selection and more trends.

None of that, however, was evident on Thursday morning. As the DJ blared out top 40 tunes and H&M employees danced in sync to Ciara’s ‘Level Up’, hundreds of eager customers proceeded to shuffle inside to browse clothing rack after clothing rack of the season’s latest trends: denim jackets with pop culture patches, floral dresses cut to the shins, and pinstripe blazers with trousers to match. Within 15 minutes of opening there was already a line to the fitting rooms; within 20 minutes, people were walking out the door with purchases in hand.

The hype might seem a little baffling for a brand that already boasts three stores across the country, but the drawcard for its second Auckland store compared to the one it launched in Sylvia Park in 2016 is that it’s a true flagship – one that puts it on par with international standards. If you’ve ever been to an H&M in London’s Oxford Street or Tokyo’s Shibuya, the layout and vibe will seem eerily familiar. In many ways, having a multi-storey H&M flagship is almost a rite of passage to becoming a truly global city. Topshop, of course, was a total disaster, but H&M’s slightly lower prices, bigger range, and prime location (it’s the first of many outlets set to open in the much vaunted Commercial Bay) has set the Swedish retailer on a course with far favourable winds for success.

Internationally, H&M has certainly hit a few snags. Financially, it’s in a bit of a mess with operating profits decreasing 62% in the first quarter of 2018. It’s also been hit by the increasing popularity of online-only brands like ASOS, Missguided and Fashion Nova, which have started to eat up sizeable chunks of its mass market appeal.

In a country still deprived of international staples like Uniqlo, Urban Outfitters and Forever 21, H&M still feels like a novelty to many which partly explains why hundreds chose to queue up. And for a brand where online makes up less than 10% of its global sales, bricks and mortar stores in New Zealand have so far been a good investment, particularly seeing as we’re still a country that seems to like to try clothes on.

New Zealand Fashion Week is over for another year, but the styles and trends seen over the last few days will inevitably turn up somewhere, somehow, for a much cheaper price. The movement to buy more ethically produced, New Zealand-made garments certainly give local brands a lucrative niche. But in light of the WORLD debacle from earlier this year, it turns out that taking brands at their word is a lot harder we think.