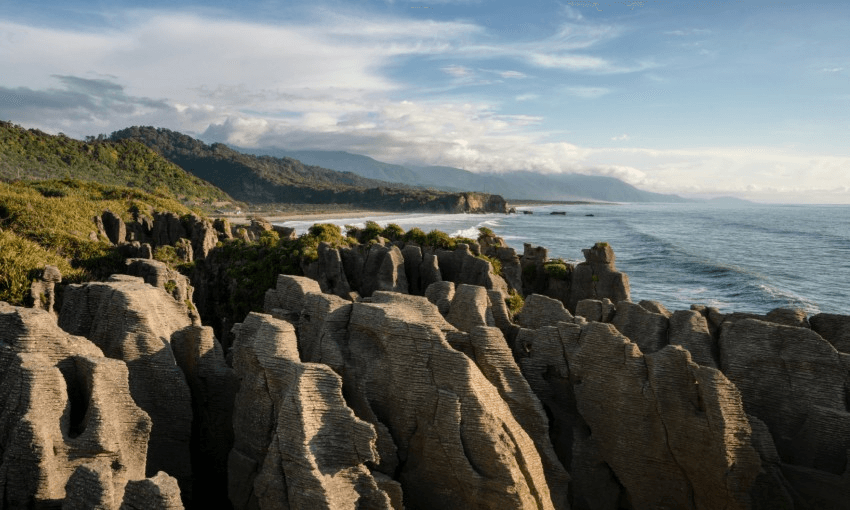 Punakaiki: What the Covid-19 crisis means for a small West Coast tourist town

In a small community on a remote stretch of the West Coast, tourism operators contemplate a town without tourists.

Halfway between Westport and Greymouth, Punakaiki usually heaves with rental cars, campers and buses during the summer. More than 400,000 people visit the unique geological formations known as the pancake rocks every year, according to a footfall counter near the entrance. Today the walkway to the quintessential West Coast tourism attraction is deserted, yellow tape and a Covid-19 sign barring the way. In recent weeks the only vehicle that has passed through on SH6 is the occasional milk tanker. Apart from the weka and about 75 locals, the township is empty.

Lorraine Ryder is one of the permanent residents. She owns the Punakaiki Tavern, one of half-a-dozen businesses in the township. She and husband Ian have run the tavern for 23 years. Usually they wouldn’t be expecting a busy April. This year, however, they were expecting a bunch of motorbike and cycle groups.

“It was actually a really good end to a season and it just went bang,” she said. When the lockdown was announced the Ryders had nine staff, all of them locals. While the wage subsidy has kept them all on full wages until June 2, if the tavern isn’t running by then the Ryders might not be able to afford to keep them on.

The tavern is now “half-mothballed,” she said. “The big chillers are turned off. We’ve got full kegs that have to go back, if there’s good use-by dates, they may be refunded.” Then there’s the 12 gas bottles on lease and an empty skip costing $250 a month. “Do you send that back? Or do you keep hiring each month and keep it here empty? We don’t know, we’re just trying to save all costs we possibly can.” One advantage for the couple, unlike many other business owners, is that they own the tavern freehold. “It’s just running costs we have to keep up with.”

Overseas tourists make up 92% of the tavern’s business, she says, and it’s unlikely that the domestic market can make up the shortfall. “New Zealanders are often more into barbecues and feeding themselves. They don’t eat out like tourists do. We would have to lower our room rates for the domestic market … We would have to have mega deals, chuck in breakfast, that kind of thing.”

When the Ryders first opened the business in 1997 there were no tourists. “No one ever stayed, we were tiny, just Ian and me. I would do breakfast and he would do nights. It was really, really slow for a few years. It took 23 years to get to a peak.” At least they know how to start over and do it all themselves, she said. “But I don’t know if I have the energy or enthusiasm to go back there. At our age it’s quite daunting.”

Other than a cafe, which has reopened for limited hours since the start of level three, the businesses in the township are closed. There are baches to rent, and while there were a few tourists seeing out the lockdown in the some motel units, the accomodation businesses remain shuttered.

Neighbouring the tavern is The Punakaiki Beach Camp, a classic coastal Kiwi campground run by the Findlay family. They’ve run the place since November 2013 and lease it from the Buller District Council. Sue and Craig Findlay and eldest son Jed work the camp along with one permanent full-time employee and four temps over summer. All were able to get the wage subsidy. “We were very happy with the way it happened, we applied on the Sunday and got it on the Monday,” Craig said. They expect, however, that when it finishes the non-family staff members, all locals, will be unemployed.

The camp was also looking forward to a good end to the summer, he said. “We were trading very strongly going into it. The last six weeks were looking very promising.” Since the lockdown was announced they have done everything to cut down costs. The lights are off in the camp as is every other appliance that can be. “We’re running just enough to keep things ticking over to make sure things don’t seize up when it does go again.”

Overseas visitors make up 85% of the campground’s business. He thinks it will be at least 18 months till they return in any numbers. “Our first wave of people will be whitebaiters on September 1. We get half a dozen staying permanently over the season but they’ve already phoned me up and said, “if it’s not level one we’re all over 70 and we can’t come’.”

Because the business is now dependent on a growth in domestic tourists, Findlay is hoping the nearby Paparoa Track, the country’s newest great walk, will be a drawcard. Last year the family established a shuttle service for cyclists or trampers staying at the campground before setting out on the track. It had begun to bring in good business for the campground, attracting waves of New Zealand trampers and cyclists, but just 22 days after the track opened it closed again with the lockdown, said Findlay. It’s scheduled to reopen in October.

Despite the lower demand, Findlay sees the lull as a chance to reassess the tourism market, and put an end to freedom camping before it starts to pick up again. “I’ve made representations to Camping Grounds NZ to change freedom camping bylaws in the interim, while there’s a low volume of people to encourage people to stay in camping grounds.” This needs to happen to ensure businesses like his survive, he said.

Across the town, on the other side of the Punakaiki River, tour guide Tine Becker has hunkered down at her home for winter. Over summer she’s a driver-guide for German-speaking small tour groups, working on contract for different companies. Her last confirmed three-week tour of the season was cancelled due to the level four lockdown. She too has been paid out through the government’s wage subsidy scheme.

Usually in winter she travels to Europe to visit family and friends, and work as a teacher at an international school camp in Switzerland. Not this year. She also thinks that with international tourism gone for 18 months or longer, there is an opportunity to think about reshaping the industry.

With 26 years experience, she has been involved with the Professional Tour Guide Association of New Zealand, an organisation that would like to be a part of discussions about the tourism’s future, she said. “We are small players, however, we would like a seat at the table. Tourism was pretty much at breaking point. You know you drive to the end of the world, the beautiful world that is New Zealand, and then you can’t get parking.”

Overcrowding was proving an anti-climax for many tourists, and a cap on numbers and slower tourism where visitors stays at least two nights in each place would be more sustainable, she suggested. She also thinks the coming season will be the time for New Zealanders to explore their own backyard. “The country will be basically deserted compared to what it was like before.”

Becker said she hopes that motels and hotels which stay open will manage to reduce their prices so New Zealand families can take trips. “That’s very much on my mind for reinventing tourism when it finally does kick off; not out-pricing the domestic market. New Zealanders [being able to see] parts of this beautiful country, which is the most, coveted place on each international tourist’s bucket list. I would love that to change really.”

For now, she’s putting in a vegetable garden and pondering her own future.